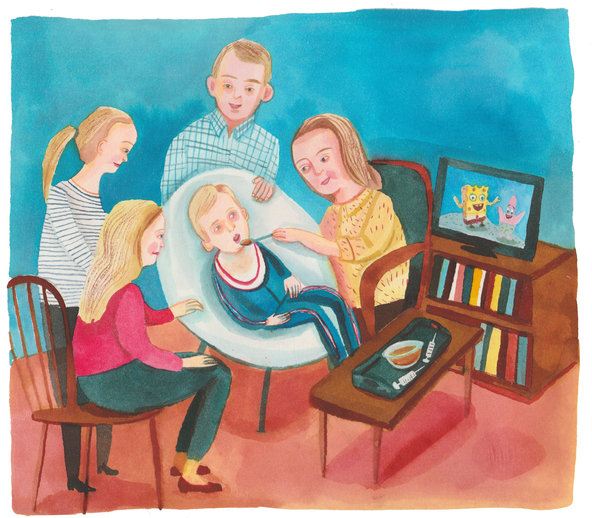 When I was a college sophomore living in a sorority house at the University of California at Santa Barbara, my parents called to tell me that my baby brother, Gavin, was dying. He had been given a diagnosis of a very rare disease, Aicardi–Goutieres Syndrome.

The doctors immediately placed him in hospice care.

He was 4 months old.

I hung up the phone and rode my red beach cruiser to class, trying to pretend that it was like any other day. I sat through Spanish class, but stared off into the distance, numb to what was happening. When I emerged, the sun seemed too bright. People were laughing, talking on their phones, surfing waves at sunset and meeting up with dates at coffee shops.

I thought back to Gavin’s birth in June. He looked like the rest of the babies in our family, with a thick pad of blond hair. A happy baby. Then at 6 weeks old he started having fevers of 104. They turned into weeklong affairs. And no one knew why.

My parents and Gavin’s doctors tried, for the next few months, to solve a seemingly unsolvable case. We just wanted to know what was wrong. But when we finally had the right diagnosis, it was awful. His disease had triggered brain calcifications, causing permanent brain damage. He was going to lose his motor skills and be unable to eat, so he would eventually die, we were told.

At first, I wanted to avoid dealing with the situation. The playground feeling of my oceanfront college campus was in stark contrast to the atmosphere at home, where my devastated family waited, heartbroken. My impulse was to stay away. I didn’t want to be crushed by the grief that was promised to me.

But I also knew I couldn’t live with myself if I never tried to face it. So I dropped out of college and spent every day with him and the rest of my family, including my sisters, who were 9 and 14 at the time.

Gavin’s disease showed up like Louisiana rainstorms — quick, strong and mean. Sometimes he was the handsome baby who smiled at me with his innocent blue eyes. Then, it was as if he was gone. Possessed. His fevers were now paired with jitters and vomiting. Gavin would shriek uncontrollably, turn a pasty gray and roll his eyes in different directions.

Mom called these visits from the Monster.

The hospice nurses stopped by every week to check Gavin’s temperature and weigh him. There was no handbook on learning to love your dying baby brother, but eventually, I did. Instead of hiding from the Monster — when his body shook, his lips turned jelly purple, and drool spilled from his mouth — I looked at him and said: You are worth it.

With his impending death sentence, Gavin was baptized in an oversize white gown. Mom wanted his soul to be protected.

After the ceremony, we played a slideshow of his short life. I saw a picture of me holding him and thought to myself, how could I not love you? We all loved him, the best way we knew how.

My parents did not give up on him, even though he was on hospice. A major change came when a friend of my mom’s who was an occupational therapist suggested the Haberman bottle, a baby bottle with an elongated nipple for children with special needs. Part of the reason Gavin was in hospice care was that he could no longer breast-feed and it was hard to get him nutrients. But he took pumped breast milk through that bottle.

And somehow his demise never came.

On Gavin’s first birthday he was taken off hospice: a hospice graduate.

The journey shifted. Instead of waiting for a baby to die, we were learning to love and live with a handicapped boy.

Now, Gavin is 9 years old. He is a quadriplegic; he cannot walk, talk or eat solid foods, but he is a survivor. He is joy.

That doesn’t mean his life is easy – for him or for the rest of the family.

Every morning one of my parents carries him downstairs around 7 a.m. They sit him in an egg-shape chair in front of the TV to watch cartoons, usually “SpongeBob” (he’s graduated from “Sesame Street”). His breakfast usually involves bran cereal for digestion, a fried egg, a couple of blueberries, maybe a waffle, sometimes crispy pork sausage. All of that is put into a coffee cup with whole milk and butter, and puréed with an immersion blender.

Gavin’s three epilepsy medications get pulled into plastic syringes. Then the hero of the morning carries a tray, with a handful of towels and a water cup, along with the delicious breakfast surprise and medicine into the TV room, and the real work begins.

Feeding Gavin can take up to an hour. And it can be messy. Sometimes he spits up his food, other times he is just not feeling well and he lets it roll down his chin, onto his neck.

Gavin’s life includes physical therapy, occupational therapy and speech therapy. But it also includes floating in the pool in a life vest, going to school and even gleefully crossing the finish line in a marathon – with my husband pushing him in a stroller.

Instead of dismantling our family, he has brought us closer together. We treasure Gavin’s small accomplishments, whether that is running down the driveway in his special gait-training walker or using an eye-gaze communication device or nodding to let us know that he wants to use the bathroom, play with his sister or bounce on the trampoline.

Courtney Lund is working on a memoir about her brother.