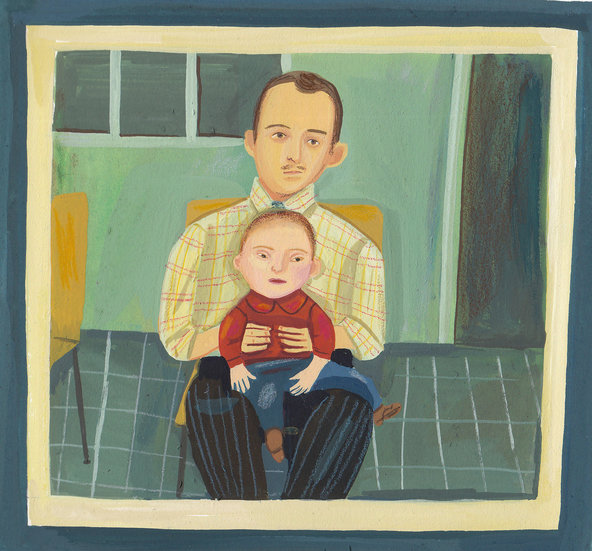 The first time I saw my brother, Jimmy, he was 60 years old, and I was standing at his hospital bedside in the town of Dunkirk, N.Y. He was intubated with intractable pneumonia and lay in a drug-induced sleep, his sparse ginger hair so different from the rest of my brunette family. His ID bracelet showed his birth date: June 26, 1953, exactly 18 months after mine. Until that moment, I hadn’t known his birthday.

Ten days earlier, I was at work in New York City when my phone rang. A voice said, “This is Wanda from your brother Jimmy’s group home.” Tears came instantly, although I’d never heard of her and had no idea why she was calling.

Jimmy was the third of my parents’ four children, born severely disabled with Down syndrome. “Send him away and put him out of your mind,” they were told.

Back then, there was a widely held idea that having a child with disabilities was a judgment from God. The parents must have done something terrible to merit such a punishment. The principal of my high school cautioned us students against premarital sex, explaining that he’d strayed once, resulting in a child who was a “vegetable.”

My father was a radiologist in our small town, where all the doctors were friendly. He once told my sister that he was in the delivery room when Jimmy was born, and the obstetrician, knowing something was wrong, had wordlessly indicated that he could do away with the child with a bit of pressure on its neck. His offer was declined.

So Jimmy was sent away, becoming a ward of the state. My knowledge of my brother consisted primarily of a snapshot taken at the institution showing a small boy with slanted eyes on my father’s lap. My sisters and I learned from our parents’ bitter response not to ask about him.

One day my father, when asked how Jimmy was, replied, “How’s Jimmy? He’s an idiot!” My mother sat watching a television documentary about retarded children, weeping. My father, after a furious argument with my mother, broke down, asking over and over: “What did I do to deserve a son like that?”

As an adult, I met others with developmentally disabled siblings. Sometimes I’d break training and mention Jimmy. “Do you visit him?” they’d ask. I’d say no, and after an awkward moment I’d go back to avoiding any thought of him, the way you avoid bumping against a painful wound. I believed he’d be too frightening to even look at, a “vegetable” living a grim, pointless, institutionalized existence.

I had never seen my brother, and now someone named Wanda was saying he was gravely ill, she’d been caring for him for 20 years, and loved him. I had ignored my brother my entire life. Now I was devastated that he was dying. I should visit him, I thought, then had an irrational fear that my parents — both long gone — would be angry. Jimmy would have no idea who I was or even what a “sister” was. His caretakers would think I was a hypocrite, showing up for his death when I hadn’t shown up for his life.

“That’s how it was,” Wanda said. “There was shame. I had one woman — her sister only visited after the parents died. It would have upset them. Nobody is judging you.”

“Would it make any difference to him if I came?” I asked.

“It would,” she said decisively. “I think he would know. Come.”

Three days later, I stood in the I.C.U. as Wanda lovingly stroked Jimmy’s face. “Jimmy, this is Lisa,” she murmured. He looked at me quizzically. Wanda treated him as if he were her child. I was his sister and a stranger.

That night, I finally learned who Jimmy really was. Though nonverbal, he made his feelings known, Wanda told me. When he was happy, he’d let out a “Yiiiii!” He loved “Wheel of Fortune,” especially Vanna White. He was particular about his clothes, rejecting shirts without his favorite sports logos. His housemates called him “Rezzie,” short for our last name, Reswick.

Wanda showed me his room, where I was astonished to see a menorah next to his bed. “We take Jewish residents to a special synagogue program,” Wanda explained. She pulled out photos of parties, picnics and trips — evidence of a rich, full life I’d missed completely, one I should have been part of.

“My guys,” she said of Jimmy’s housemates, “they know something’s wrong. They keep asking about Jimmy. They can’t communicate like we do, but they understand more than you think.”

Wanda told me she’d arranged for a service and a cemetery plot. “But the family can do whatever you want,” she added. But you’re his family, I thought.

At the memorial service a week later, my sisters and I met the rest of Jimmy’s family: his housemates, caretakers — even a woman representing the synagogue.

A retired pastor named Fred who had taught Jimmy’s life skills classes opened the service, saying he would miss “my friend Jim.” A man in a wheelchair, his hands curled stiffly on his chest and eyes staring blankly, started to wail. A caretaker sprang up to wheel him out. “Bring him back,” Fred called. “I can yell louder than he can.”

A woman stood up. “Jimmy always gave me a hug,” she said. “He didn’t do that with everyone. I think people like Jimmy can sense who needs their love.” Jimmy’s gray-haired roommate, Harry, rested his head on Wanda’s shoulder, eyes downcast. My sisters and I sat tearful and silent, struck by how deeply Jimmy had touched all of them.

“You saw him when it counted,” she said. I don’t believe that. I could have been a sister to Jimmy. Instead I turned away, clinging unquestioningly to my fears and ancient prejudices. Until Wanda reached out and released me.

Lisa Reswick is a writer in New York City who is working on a book about how families cope with having a developmentally disabled child.