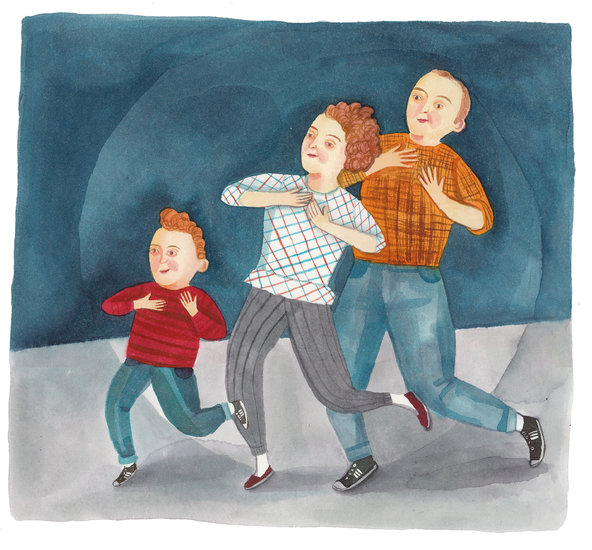 My youngest son, Sawyer, used to spend far more time relating to his imagination than he did to the world around him. He would run back and forth humming, flapping his hands and thumping on his chest. By the time he was in first grade, attempts to draw him out of his pretend world to join his classmates or do some class work led to explosions and timeouts. At 7 he was given a diagnosis of being on the autism spectrum.

That was when my wife, Jen, learned about the practice called joining. The idea behind it, which she discovered in Barry Neil Kaufman’s book “Son-Rise,” is brilliant in its simplicity. We wanted Sawyer to be with us. We did not want him to live in this bubble of his own creation. And so, instead of telling him to stop pretending and join us, we started pretending and joined him. The first time Jen joined him, the first time she ran beside him humming and thumping her chest, he stopped running, stopped thumping, stopped humming and, without a single word from us, turned to her and said, “What are you doing?”

We took turns joining him every day, and a week later we got an email from his special education teacher telling us to keep doing whatever we were doing. He’d gone from five timeouts a day to one in a week.

The classroom was the same, the work was the same – all that was different was that we had found a way to say to him in a language he could understand, “You’re not wrong.” Emboldened by our success, we set about becoming more fluent in this language. For the next couple of years we taught ourselves to join him constantly. This meant that whatever we were doing had to stop whenever we heard him running back and forth and humming. But we could not join him simply to get him to stop running and thumping and humming. We had to join him without any judgment or impatience.

That was the trickiest part. The desire to fix him was great. I had come to believe that there were broken people in need of fixing. Sometimes, I looked like one of those people. I was a 40-year-old unpublished writer working as a waiter. My life reeked of failure. Many days I looked in the mirror and asked, “What is wrong with me?”

The only way to believe that Sawyer wasn’t broken was if no one was broken – not anyone anywhere ever.

I was used to seeing good people and bad people, smart people and stupid people, talented people and untalented people. I had to break that habit. I did this through a trick of perception. If someone was flapping and humming, or insulting you or saying something cruel about a whole group of people, I taught myself to pay attention to the person beneath the behavior, to the one who was scared or confused, who felt unlucky or undeserving or inadequate.

I did this, ostensibly, so that I could be Sawyer’s dad and help him flourish in the world. And by and by he began emerging from his bubble, began talking about wanting friends, began talking about his future. Now, 10 years later, at the end of our classes (we home-school him) every day he asks, “Dad, can we hang out today?” Had this been all that had come of joining Sawyer and learning to see a world without broken people, I suppose it would have been enough.

But 10 years later the writer who couldn’t get published, who felt like failure, now finds himself talking to groups and even crowds of people, telling them, in so many words, “Everything is O.K. even though it looks like everything is not O.K.!” I would never have talked to these people, nor published the essays that inspired these talks, if Jen and I had not joined Sawyer.

Yet the moment I really understood the power of joining came long before any of this. I was having an argument with my wife. I consider ours a good relationship, by which I mean it is the relationship against which I measure all my other relationships. But on this evening we were in the thick of a particularly nasty back and forth. It started small, as they all do. We each felt wronged by the other. The more we talked, the more we tried to “clear things up,” the worse it got. We raised our voices though we live in a small house and our boys would hear us. As the argument grew more heated, as Jen’s voice grew louder and sharper, she shifted before my eyes. I wasn’t seeing my best friend and lover anymore; I was seeing an enemy. Her words, it seemed to me from the opposite end of the couch, were daggers aimed squarely at my worthiness. I had to defend myself.

This is often how I’d practice with Sawyer or myself or strangers on the street. If any of us looked broken, I’d ask, “But what if no one is broken? Then what are you seeing?” So that’s what I did with Jen. And as I asked this question, she changed again. Now I saw a woman who was as upset as I was, who wanted to be in agreement as badly as I did, who didn’t understand why we couldn’t reach an agreement. In that instant my war was over. Soon, the argument was over as well. As always, it had just been a misunderstanding. We still loved each other after all.

Joining Sawyer taught me that unconditional love is not some point on the map. It is a path that leads me where I want to go – to the world I want to live in, rather than the one I’m seeing.

William Kenower is a writer and the editor of Author magazine.