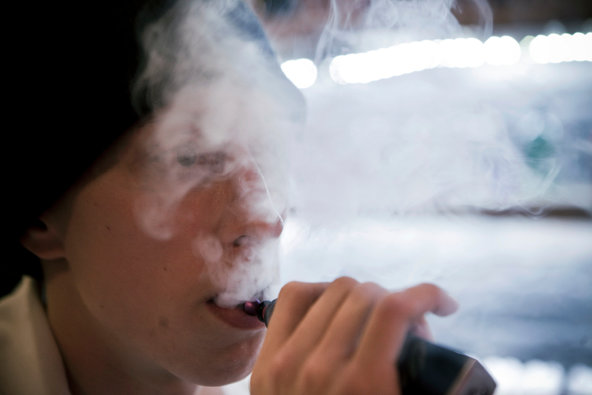 A study shows that many teenagers who would have never smoked are now vaping.Credit Katie Orlinsky for The New York Times

Many teenagers who never would have smoked cigarettes are now “vaping” with flavored e-cigarettes, leading to a new generation using nicotine at rates not seen since the 1990s, a new study suggests.

The study, released Monday in the journal Pediatrics, tracked the use of cigarettes and e-cigarettes among 5,490 California high school seniors who graduated between 1995 and 2014. E-cigarettes do not burn tobacco, but are battery-operated inhalers that heat up and vaporize liquid containing flavors and nicotine, a practice known as vaping. The liquids used in vaping range in taste from traditional tobacco and menthol flavors to fruity and sweet combinations like gummi bear, banana bread and cotton candy.

When e-cigarettes came on the market in 2007, some public health experts hoped that they would serve as a substitute for traditional tobacco products and lead to declines in tobacco use.

But the rate of teenagers using nicotine — either through tobacco cigarettes or e-cigarettes — is on the rise. About 14 percent of Southern California high school seniors in 2014 said they had smoked or vaped in the last 30 days. Researchers say they have not seen similar levels of nicotine use among teenagers since 1995, when 12th grade smoking rates were 19 percent.

The numbers suggest that rather than prompting teenagers to replace cigarette smoking with vaping, e-cigarettes instead have enticed an entirely new group of teenagers to use nicotine. While the study focused on California teenagers, researchers say the numbers are consistent with national trends.

“Kids are not just using e-cigarettes instead of cigarettes. That is what we were frankly hoping to find,” said Jessica Barrington-Trimis, the lead author of the study and a postdoctoral scholar research associate in the department of preventive medicine at the U.S.C. Keck School of Medicine. All of the teenagers that were expected to be using cigarettes in 2014 are using them, she said, “and then there is a whole group of kids using e-cigarettes on top of that.”

The amount of nicotine in the liquids used with e-cigarettes — often called “vape juice — varies, and users can purchase liquid with no nicotine or nicotine content ranging from 3 milligrams per milliliter to 18 milligrams per milliliter or even higher. While earlier studies have suggested that some teens are using nicotine-free vaping liquids, researchers say the majority of teens appear to be using nicotine-infused liquid in their e-cigarettes.

Dr. Jonathan Winickoff, professor of pediatrics at MassGeneral Hospital for Children and Harvard Medical School, who wrote an accompanying paper in Pediatrics, said this is the first study of e-cigarette use in adolescents to show such a strong longitudinal sample with such a drastic effect.

“We had a trend of decreasing nicotine use,” said Dr. Winickoff. “What the e-cigarette has done is halted that decrease in its tracks…. We don’t want a fifth of our high school students graduating with nicotine addiction.”

While e-cigarettes do appear to be safer than smoking tobacco, they are not risk free. Nicotine disrupts neurotransmitter activity and is highly addictive, particularly in a developing brain. And the liquids contain solvents, formaldehyde and other ingredients that pose health risks when inhaled.

While it’s true that there are nicotine-free vaping liquids, the e-cigarette industry is not regulated, which makes it hard to know what ingredients are actually in any given product. Though the Food and Drug Administration recently took jurisdiction over e-cigarettes, it will be years before any regulations are put into effect. Currently, many products continue to be made in China with little — if any — oversight by the United States.

“The F.D.A. has done tests on these vaping products that supposedly do and do not contain nicotine, and what is advertised is really not what’s in the product,” Dr. Winickoff said. “When the product is labeled as no nicotine, they’ve found nicotine. So kids don’t know what they’re getting, and as a pediatrician it really scares me.”

Not everyone agrees that e-cigarettes pose a significant risk to teenagers. Dr. Michael Siegel, professor of community health sciences at the Boston University School of Public Health, countered that many teenagers say they are using e-cigarettes that contain only flavorings and no nicotine, and therefore are not getting addicted.

“E-cigarette use among teenagers is a largely social phenomenon,” he said. “The fact that you tend to see teenagers doing this in groups, not out in the cold vaping alone, suggests that e-cigarettes are not addictive.”

But there is a growing body of research showing that e-cigarettes do serve as a gateway to traditional tobacco products. Last month, the U.S.C. researchers also reported in Pediatrics that adolescents who vape are six times more likely to smoke cigarettes in early adulthood as non users.

“Once kids get hooked on e-cigarettes, they are more likely to go on to become cigarette smokers,” said Stanton A. Glantz, director of the Center for Tobacco Control Research and Education at the University of California, San Francisco.