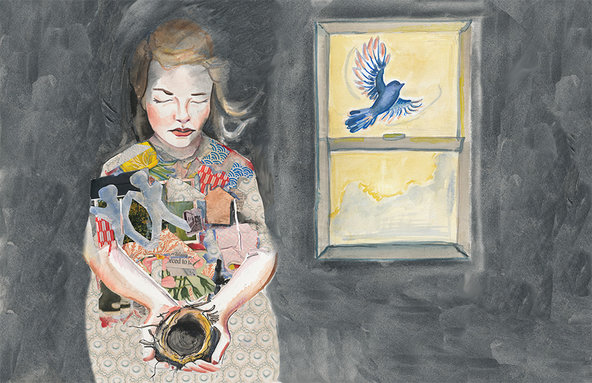 A week after saying goodbye to our 4-year-old foster son, life is incredibly quiet. Mind-numbingly quiet.

My heart attempts to fill the silence by running through the scores of loud memories he left behind him. Eleven months’ worth of memories run on a loop in my mind, starting with the sounds of the first evening we met him last April: His boisterous laugh, the way he pounded out music on a piano keyboard, the wheeze from the cold he was battling as he fell asleep next to me on the couch.

The noise of the rain smacking the pavement the next afternoon as we all sprinted to my car to take our new foster son home with us for the first time. The sound of bedroom doors swinging open and slamming shut as he explored.

In the time since, I’ve taken him to the doctor, the dentist, his first swim lesson, his first day of preschool, his first movie theater and his first karate class. He was a part of our family for every vacation and every holiday.

But mostly, our lives were made up of all the in-between days. The nothing days. The typical, mundane, in-the-trenches-of-parenting kind of days. Days of scooters and playgrounds and painting and board games and lots of reminders to stop running in the house. Evenings of cooking dinner and dancing in the dining room and cheering when Daddy arrived home from work and more reminders to Stop. Running. In. The. House.

I remember the way he would yell — scream, really — in reaction to any loud noise: trucks driving by, fireworks or even a knock on his bedroom door.

I fill the quiet with memories of him splashing in the backyard pool with my 5-year-old biological son, Ryan. The sound of him yelling “I love this family!” as we all ran back and forth across the yard, crunching through piles of fallen leaves. His wide-eyed exclamation from the living room window one morning: “It’s snowing! Look, you guys! It’s REALLY snowing!”

We were brand-new foster parents, hoping to adopt, and he was our first placement. His was a confusing case from the beginning. Maybe it was confusing because so many foster care cases are complicated, or maybe it felt that way simply because it was our first experience.

I remember the sound of him entering a room and announcing, “Ladies and gentlemen … myyy muuuusic!” before belting a soulful song into the microphone attached to his toy keyboard.

The noise of him and Ryan playing. Arguing over who had the toy first. Making up, playing again. The sound of brothers who were just 14 months apart in age. They learned so quickly how to love each other, how to push each others’ buttons, and that they couldn’t stay mad at each other for very long even when they wanted to.

Reunification with his biological parents was “unlikely,” they told us at first. Then we got word that reunification with his parents — and his two biological brothers, who lived in separate foster homes — could happen very soon, within those first couple of months. But there were extensions, more chances, court dates upon court dates, and finally some real news right before Christmas: Two extended family members had come forward. They lived several hours away and had had little involvement in the boys’ lives, but they saw the writing on the wall. If they didn’t make a move now, it was likely the boys would eventually be adopted.

From their perspective, they were saving them. From our perspective, a move to another unfamiliar home meant breaking a bond we had worked so hard to build over the past year and the potential regression that can accompany such a change.

Another sound I remember: His gasp one recent morning when he saw me wearing a long blue dress. His eyes widened as he looked me up and down and breathed, “Oh, Mommy, you look beautiful! Is that a tutu?”

I had to turn away so he wouldn’t see the tears forming in my eyes. “Oh, thank you, honey,” I said to the wall. “What a nice thing to say. It’s a dress, but it swishes around like a tutu, doesn’t it?”

I was dressed to attend the court hearing where it would finally yet abruptly be decided: He would leave in just 24 hours.

The sounds from our last night together. The way he cried that he would miss us and begged us to come with him. The sound of my own voice, which I somehow managed to keep soft and steady even as I wiped the tears from his cheeks and whispered, “It’s O.K. to miss us; that only means you know how much we love you.”

The roar from the stuffed dinosaur the next morning at breakfast as Ryan explained that he had recorded his own voice in his gift: “Every time you get sad or miss us, you can squeeze him and hear my voice, and you’ll know you’re always in our hearts.”

A few hours later, the thudding sound as I pulled the oversize bin full of his clothing down the stairs. And then before I knew it, a quick, polite beep from the horn of the truck as it drove off with him, his two brothers and all of their stuff.

Eleven months worth of memories punctuated with one little honk.

Our memories right now may be raw but the experiences we had with him were much more happy than they were sad. We are blessed to have had the chance to know and care for such a charming and lively little boy, and we hope he took some of our love with him when he left.

We hope he somehow knows that no matter what happens in his life, we will always be a soft place he can land.

Meghan Moravcik Walbert is a freelance journalist and essayist based in Pennsylvania’s Lehigh Valley. Her experience as a foster parent is chronicled in Foster Parent Diary.

Interested in more Well Family? Sign up to get the latest news on parenting, child health and relationships, with advice from our experts to help every family live well.