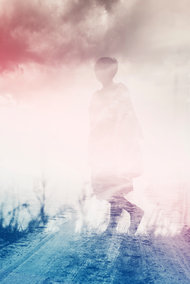 While I recover from a fractured pelvis, I have time to remember the day after a less ruinous fall two years ago. No bones broken then, but I quickly developed a shiner and then slowly an insight into the color of cancer.

A bluish-purple humdinger bloomed beneath my right eye, spreading its tendrils down my cheek. Leaning over or a deep breath hurt. With too many cancer-related hospitalizations, I was determined to avoid the emergency room. Learn from the pain, I instructed myself, and prepare your dish for the potluck: The word tugged me back to the 1970s.

I had slipped on the way to the bathroom at 4 a.m. A thud — my body hitting the hardwood floor — woke my husband who immediately supplied towels to sop up the bleeding from my forehead. Was that fall a consequence of the targeted medication of a clinical trial, a sliver of Ambien, the neuropathy in my feet from past chemotherapies, or all the above?

Still, food needed to be prepared for the gathering I was supposed to attend that evening of retired faculty women from Indiana University. The company would consist of compatriots on all sorts of committees over the course of some 40 years. We were the ones who arrived at the university to integrate the mostly male faculty. Many of these people had consoled me when cancer treatments necessitated my retirement.

I had already blanched the asparagus and started a dressing. As I assembled the dish, I rehearsed parries to the concerned comments my black eye was sure to elicit. “You should see the other guy,” I would tell my former colleagues. Or “It’s a counter-irritant; it takes my mind off cancer.”

After finding my way to the dinner, I joined some 25 variously frail and hale retired faculty women who had brought quiches and salads for a communal meal. They were filling their plates and sitting in small groups.

With only a spasm of pain, I settled on a couch next to a friend and started to launch into one of my usual shticks: that she should participate in the oral history project to document her work establishing gender studies and African-American studies at our university. But she interrupted me.

“Do you realize that I am the first black woman to retire here since I don’t know many years ago?”

Then we were off and running down memory lane: recalling E.S., a pioneering scholar, and C.M., a brilliant teacher. Careers blindsided, people lost to us. What had happened to them? Gone without a trace. Did their isolation in a Midwestern college town depress them and had their depression further isolated them? Were they pigeonholed as representative African-Americans and erased as unique human beings? Although the administration tried various retention strategies, somehow the environment remained inhospitable.

“It’s still a hard place to be a black woman,” my friend sighed.

While driving home I had worried and wondered why E.S. and C.M. did not, could not navigate their way to that evening’s event and whether newly hired African-American women would find the path as hazardous now as it had been then. At my front door, though, a more self-regarding thought stopped me in my tracks.

How odd that not one person had mentioned my black eye! “You look great,” one and all had volubly exclaimed at my coming and then at my going.

Did my friends assume that oncologists routinely punch their patients in the face? Or were they exhibiting some version of Midwestern niceness? Or are cancer patients invisible as individuals, visible only as cancer patients who must be perpetually bolstered and boosted? My colleagues had seen Susan with cancer, not Susan who arrived in their midst with a black eye.

“People who have had cancer are treated as a kind of minority group,” the prostate cancer survivor Michael Korda believes, “as if the most important thing about them is their cancer, much as many people still treat African-Americans, as if the only thing that matters about them (or to them) is that they are black.”

During the following months, I mulled over the hyper-visibility of categorized cancer patients and African-Americans, on one hand, and their invisibility as individuals, on the other.

Only this year, since it takes me quite a bit of muddling to learn anything, did Michael Korda’s insight make me realize how very few cancer memoirs we have from people of color, despite exceptions like those produced by Audre Lorde and Robin Roberts.

The experiences of minorities remain strikingly marginal in cancer literature: not only in memoirs but also in blogs, diaries, essays, stories, plays, novels, movies and television series. Since these genres generally express the perspectives of individuals, we are impoverished in our understanding when what we read and see excludes the reactions of patients from various economic and ethnic and racial backgrounds. Mortality statistics and drug advertisements notwithstanding, the cancer patients many of us imagine — as individuals enmeshed in their own stories – are white.

In the prize-winning book “Citizen: An American Lyric,” Claudia Rankine describes taking a few steps back when someone with multiple degrees said to her, “I didn’t know black women could get cancer.”