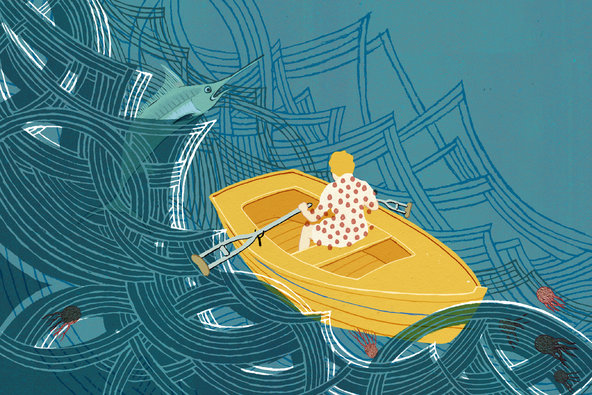 On a bright, cold Sunday in mid-January, I returned home from visiting a frail member of my cancer support group and opened the garage to haul the recyclables up the steep driveway to the street. After a few steps, my feet started to slip and I fell with a thud on my bottom. The big bin toppled over me, scattering plastic containers and cardboard boxes, as my hands reached down to feel a sheet of ice that had been invisible on the asphalt.

I was about to discover what happens when cancer patients must deal with unrelated physical injuries.

After some screams of pointless rage, I realized that my husband — who was recovering from surgery for a torn tendon — could not hear me inside the house. So I crawled, using my arms to prop myself up, back into the car where I phoned and directed him to bring his walker to the front door. I managed to steer the car up the driveway, hobble with the walker inside, and collapse onto the blue couch. If I did not move, the throbbing seemed bearable. Since it was late afternoon and my husband’s injury rendered him unable to drive me to the hospital, I settled down in the hope that rest would help.

But I awoke without the use of my legs. Any pressure was excruciating, so we called a friend for a lift. At the E.R., scans showed three pelvic fractures. I would be unable to get around for quite a few days and then not without a wheelchair or a walker for weeks. Unlike Ernest Hemingway, I did not believe that I would soon feel “strong at the broken places.”

“What’s next?” Mrs. Job started kvetching inside my head. “Locusts?” How could doctors perform a pelvic operation on a person who had undergone umpteen abdominal surgeries for ovarian cancer? With an ostomy, my innards were not like those of normal people. Might such an operation trigger a recurrence? What if the anti-cancer drug I take daily impedes bone regeneration?

When the E.R. doctor explained that in this case the fractures should heal themselves, a wave of relief enveloped me. Her words prompted a series of reflections about disability and cancer.

To begin with, I knew that the experience would have been worse, if I had started out disabled and subsequently received a cancer diagnosis. Paradoxically, you need to be agile and sturdy to manage the unrelenting routine of cancer treatments. Only now do I realize how exceptionally difficult it must be for disabled cancer patients to travel repeatedly to the hospital, to undergo operations or infusions or radiation, and to cope with debilitating side effects. I had learned how to negotiate those straits and could imagine the difficulties of adapting them to my altered condition.

Back at home, I found myself marooned on the blue couch, unable to reach the bathroom or the bedroom or even sit up without terrible spasms. My attendance at support group meetings would have to cease and I feared that I would never see one of my friends, Carrol, again.

Carrol had started on hospice care in October. She remained at home for three months, but then, unexpectedly, she tolerated some food. Confined to her bed and unable to determine where or how quickly metastases were advancing, she did not know how much time she had: another week, a month, or more. Recovery was not in her lexicon.

At the close of every visit, we had made our final embraces and goodbyes. A week or two after my fall, I realized that a profound appreciation of her past life and a profound acceptance of her future death stood Carrol in good stead, not a macho determination to battle and beat the disease.

Carrol knew that a clinical trial had granted me a precious remission. On the day I received news of her death, I pondered her decision — upon learning that her cancer was terminal — to throw herself a Last Chance to Dance party.

She had wanted me to relish a reprieve she never received. My unforeseen stay of execution should ground my determination to embrace whatever befalls me — for better or for worse, in sickness and in health — until that moment when I would arrive at the state she inhabited when I last saw her. Although unwelcome, disability has everything to do with my future life, not my future death.

As hydrocodone kicks in and physical therapists teach me how to negotiate without two weight-bearing legs, my temporary immobility shrinks in significance. These professionals try to wean me from an ungainly version of slipping and sliding steps — something like the Mashed Potato — that get me from the wheelchair or the walker onto the toilet or the bed.

Considering the example of Carrol, I bid farewell to my legs and take up arms against a sea of troubles more negotiable than the miseries with which she had to contend. Doing the Mashed Potato, wincing in pain, graceless under pressure, I hoot to nobody within hearing: the hell with you, Hemingway! I am quarreling with the writer who (to my mind) most brilliantly and foolishly dramatizes the challenges of personal bravery.

Later that night, as if conjured, he slides into a chair next to the blue couch, lifts a glass, and breathes the word “courage.” It’s a complicated matter, we agree, and then we clink.