After David Bowie released a video about his cancer death, I realized that two members of my support group had been conducting tutorials on dying with me. Their teaching styles differed, as did the content of their courses, but I was privileged to be able to learn from them that there are many ways of dying and no set right way. 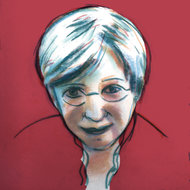 One member of my group, a public presence in our small town because of her articles in the local paper, informed our group that she would not be attending meetings any longer. Having decided that further medical interventions could not extend the quantity of her life without harming its quality, Carrol enrolled in hospice at home.

Once she was set up in a hospital bed with a port and a catheter, I began visiting Carrol, who wanted to hasten her dying not only for herself but for her husband and son as well. Looking remarkably hale, she had stopped eating, though she continued drinking water. With characteristic wit, she posted a blog on the foods she most enjoyed remembering as she began what turned into a lengthy fast.

During one of my visits, Carrol quoted her grandmother’s advice: that we should leave the world a better place than we found it. The sad condition of the world brought to her mind a guy who had once given her the finger as he barreled through an intersection where she had the right of way. Starting to get groggy from pain medication, she focused on me to explain that he had been spreading a ripple of spite which made her want to counter with a ripple of courtesy.

I had traveled to Carrol’s house after a restaurant luncheon at which Ilka, the most private person in my support group, had thrown up. Ilka was embarrassed, but we knew she was dealing with complications from her treatment, including pouches draining the contents of her small intestine and kidneys. Additionally, a series of medical interventions had caused a succession of infections. No need for embarrassment, we assured her as we marveled that she could join us in her condition.

Ilka had already lost a great deal of weight, though she retained her beauty. When I hugged her, she felt skeletal. However, she never spoke about dying or palliative care. Wanting to forestall her dying not only for herself but for her husband and son as well, she had decided to try a clinical trial that required her to travel in her weakened condition to Indianapolis every week — a three-hour round trip.

When the experimental drug further depleted her, Ilka landed in our local hospital. From the hospital, she emailed the group, apologizing for missing our meeting, but hoping to attend in two weeks’ time. Upon her release, I visited her at home, where she insisted that she could deal with the demands of her condition on her own. Pain medication would cloud her mind.

Carrol and Ilka seemed to be teaching me antithetical lessons about how to approach dying. Though I cherished them both, I found myself wondering — as students inevitably do — whether I agreed with their precepts.

Anticipating her own demise, Carrol tried to get death over as efficiently as possible. Clinging to life, Ilka attempted to put death off as long as possible. Sometimes I worried that Carrol took to her bed too quickly. Sometimes I feared that Ilka subjected herself to excessive medically produced suffering.

But after I pondered David Bowie’s final video, I realized that both Carrol and Ilka were underscoring the importance of determining in one’s own way — according to one’s own values — the proper time to relinquish treatment. How difficult that decision must be: to figure out when interventions should be stopped, how active or passive a stance to take toward cancer, which physical deficits can be endured and which cannot.

David Bowie shared his experience in the video released on his 69th birthday, two days before his death. In “Lazarus,” he created a portrait of his dying: convulsing in a hospital bed, his face bandaged, his eyes replaced with buttons. After the last words, “I’ll be free / Ain’t that just like me,” a stronger Bowie appears writing in his journal until he backs into a wardrobe, closing it with one hand.

Death as a hideaway, a sanctuary, a withdrawal into the place where costumes are stored: the gender-bending artist suggests that the dead are not gone but closeted and thus capable of returning in transmuted forms.

David Bowie accomplishes this miracle every time “Lazarus” is played and it therefore remains “a gift” to his fans, as his producer put it. The final sequence — of his hand closing death’s door — is resonant with the scenes of instructions I received from dearly missed friends.