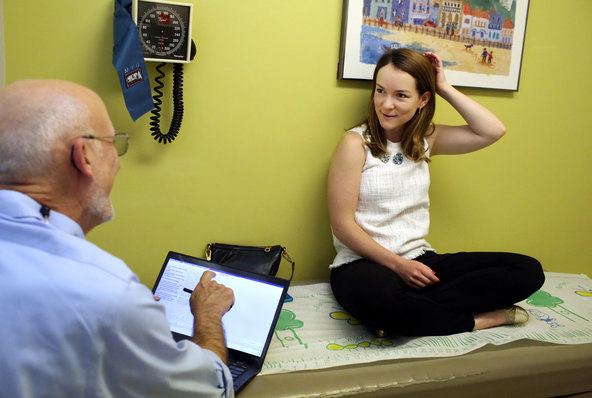 Lule Rault, 26, talks with her doctor, pediatrician Ramon Murphy, who she’s visited since childhood at Uptown Pediatrics in Manhattan.Credit Yana Paskova for The New York Times

Lule Rault took a seat in the waiting room of Uptown Pediatrics on Park Avenue, across from several young mothers with babies in tow. A toddler played with the toys on the waiting-room floor.

“I felt like they might think I’m just another young mom or something,” she said, “since I am so close to their age.” But Ms. Rault, a 26-year-old medical student, was there this month for her own annual checkup. She has been a patient at Uptown Pediatrics since her own infancy. And she plans to remain so until she finishes her M.D. at Tulane University. At that point she will be 29.

She is not looking forward to the transition.

“I don’t have to leave Dr. Murphy, do I?” she said in an interview by email. “I’m only 26!” And she is not Dr. Ramon Murphy’s only patient long out of high school. “The last time I was there, he told me there was one patient older than me — a boy.”

A poll from the Pew Research Center last month found that for the first time in more than a century, young adults are more likely to live with their parents than with a partner or a spouse. So it should come as no surprise that many are perfectly happy to remain with their childhood physicians. The age at which patients leave the pediatric nest varies, depending on whether their doctors are trained to treat adolescents and young adult patients. Historically, that age has been 18 to 22. It seems to be moving up. 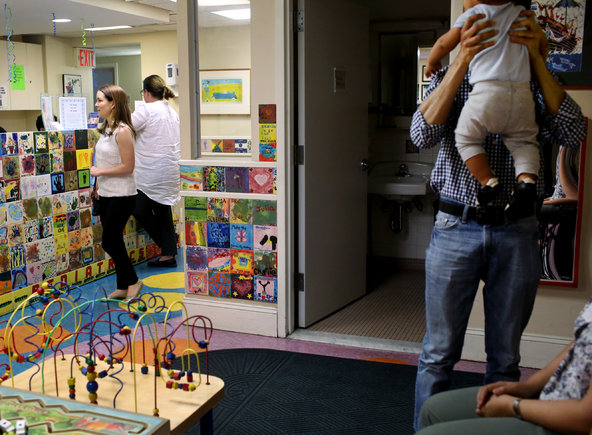 Lule Rault, 26, left, emerges from an appointment at Uptown Pediatrics in Manhattan. The waiting room there caters both to young children and to patients in their twenties.Credit Yana Paskova for The New York Times

Under the Affordable Care Act, children can remain under their parents’ insurance plan until they are 26, which since 2010 has added three million young people to the insurance rolls, according to the Department of Health and Human Services. But that doesn’t mean healthy young adults are regularly visiting any doctors.

“Young adults on the whole are not very connected to the health care system,” said Dr. Patience White, a director at the Center for Health Care Transition Improvement, a group that studies the transition from pediatric to adult health care. “They often turn to the emergency room when they get sick.”

In New York City, many pediatricians are willing to keep their older patients so that they won’t stray from the system. Dr. Murphy and other pediatricians also said many young adults have found it impossible to find an internist who will accept insurance from new patients. Some require an initial concierge fee that runs as much as $3,000; those who do take insurance often don’t have appointments available for four to six months.

“The patient, or parent, reasons that it makes more sense to just stay with the pediatrician,” Dr. Murphy said.

Furthermore, a growing number of pediatricians are trained to treat adolescents and young adults. Dr. Murphy’s practice reflects his 19 years at the Adolescent Health Center at Mount Sinai Hospital in Manhattan. It’s a different kind of rapport from the one he has with his grade-school patients.

“I ask them about friends, school, career choices,” he said. “I wasn’t cut out to wear clown noses and funny ties.”

His waiting room at Uptown Pediatrics even has two sides — one furnished with the familiar trappings of the Sesame-Street-and-K.C.- Undercover set, the other with seating and reading material for adult-size patients.

“I think it’s a New York City phenomenon,” said Dr. Ralph Lopez, whose Upper East Side practice focuses primarily on teenage boys and young men. “Your mom and dad may pick out an internist for you, but you don’t like the doctor, so you stay with someone like me.” He added, “I’m seeing two 25-year-olds later today.”

Andrew Ruvkun, 20, who runs varsity track at Carleton College in Minnesota, plans to stay with his Manhattan pediatrician, Dr. Sol Zimmerman, at least until he finishes college.

Suzy Storr, 25, an artist who a year ago moved back to her Park Slope home after finishing her studies in England, would have liked to keep her old pediatrician, Dr. Sylvain Weinberger, but was told she had aged out of his practice.

“It was kind of sad to me,” she said. “I’d always had a fear of needles, and while I’m better about it now, he always knew how to comfort me.”

Dr. Weinberger suggests his patients find another physician when they leave for college. Up to age 19, “they can always call me,” he said.

As a practical matter, he noted, any patient 18 or older who needs to be hospitalized will go on an adult floor, where a pediatrician may not have admitting privileges.

Ms. Storr tried an internist, but she felt that she was“kind of rushed” and that the visit was about “doing a checkup and kicking you out.”

In New York City, several private practices devoted to adolescent medicine have sprung up to fill the gap for young adults whose needs have outgrown the so-called baby doctor.

“Many pediatricians are uncomfortable with talking about birth control, condom use,” said Dr. Karen Soren, director of adolescent health care at the NewYork-Presbyterian Morgan Stanley Children’s Hospital. “This is part of why adolescent medicine came into being.”

“Traditionally,” she added, “adolescent medicine was intended to deal with kids 12 to 18 years old. It became pretty clear kids didn’t suddenly change into adults at 18, so a lot of us kept them until 21 and beyond.”

Dr. Cynthia Pegler, whose private patients on the Upper East Side primarily are young women, will continue to treat patients until they are ready to be parents themselves.

“My official rule is it is really time to go when you yourself are ready to have a baby,” Dr. Pegler said.

Dr. Soren recalled one patient who returned to her adolescent clinic after a year at an adult internist.

“I tried to prepare her as best I could,” Dr. Soren said. “I printed out her vaccines, her medical records. I made an appointment for her with the new doctor. She went once, but said she went into the waiting room and there were all these ‘old people.’ A year later she came back to refill her birth control pills, so I began seeing her again.”

Dr. David Bell, medical director of the Young Men’s Clinic and the Family Planning program at NewYork-Presbyterian, said that when he started at the clinic 16 years ago, the age cutoff was 24. Now it’s 35.