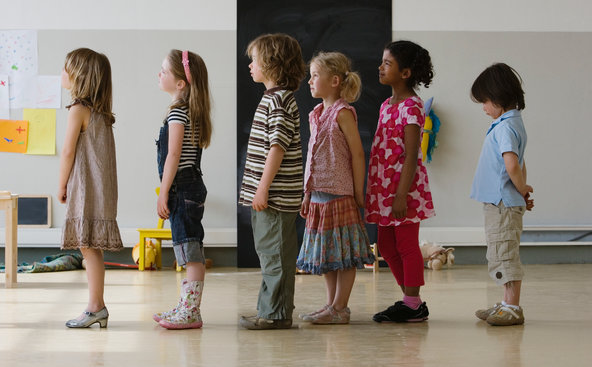 New research shows that the youngest students in a classroom are more likely to be given a diagnosis of attention deficit hyperactivity disorder than the oldest. The findings raise questions about how we regard those wiggly children who just can’t seem to sit still – and who also happen to be the youngest in their class.

Researchers in Taiwan looked at data from 378,881 children ages 4 to 17 and found that students born in August, the cut-off month for school entry in that country, were more likely to be given diagnoses of A.D.H.D. than students born in September. The children born in September would have missed the previous year’s cut-off date for school entry, and thus had nearly a full extra year to mature before entering school. The findings were published Thursday in The Journal of Pediatrics.

While few dispute that A.D.H.D. is a legitimate disability that can impede a child’s personal and school success and that treatment can be effective, “our findings emphasize the importance of considering the age of a child within a grade when diagnosing A.D.H.D. and prescribing medication for treating A.D.H.D.,” the authors concluded. Dr. Mu-Hong Chen, a member of the department of psychiatry at Taipei Veterans General Hospital in Taiwan and the lead author of the study, hopes that a better understanding of the data linking relative age at school entry to an A.D.H.D. diagnosis will encourage parents, teachers and clinicians to give the youngest children in a grade enough time and help to allow them to prove their ability.

So how should we interpret data showing different rates of A.D.H.D. diagnosis among populations of children who are similar in everything other than relative age at school entry? Cautiously, says Michael Manos, the head of Cleveland Clinic Children’s A.D.H.D. Center for Evaluation and Treatment.

“The kind of attention that you have to use in school is the kind of attention that’s difficult for a person with A.D.H.D.,” so attention deficits are more readily recognized in a classroom situation, he said. “If the diagnoses are performed accurately, then some kids are getting noticed sooner than other kids,” he said. If younger children with A.D.H.D. are starting treatment earlier because they’re starting school earlier, then that’s a good thing.

But that presumes the diagnosis is an accurate one. “When you take people who are in a 15-minute pediatric primary care physician’s office visit, and the mother describes hyperactivity and the physician automatically prescribes medication, that’s a problem,” Dr. Manos said. Many parents who describe concerns about children’s behavior “aren’t describing developmentally inappropriate behavior,” he said. “They’re describing behavior that does not meet certain expectations,” and that can be the issue in classroom settings as well, where some students are older than others.

“I think the link between age at school entry and A.D.H.D. diagnoses are not really about being young or ‘not ready,’” said Daphna Bassok, an assistant professor at the University of Virginia’s Curry School of Education who has studied kindergarten readiness, by email. “Instead, I think they are about a child’s relative age. “

“In early childhood classrooms, where a month or two age difference can make a big difference,” she continued, “ teachers perceive the youngest children in the class as having more attention struggles, and behavioral struggles, than the older children, irrespective of the child’s actual age.” When those teachers flag those struggles, the path to a diagnosis is paved, but the diagnosis itself still depends on the expertise of the clinician.

Stephen Hinshaw, co-author of “A.D.H.D: What Everyone Needs to Know,” said that early recognition of attention deficits “could be an opportunity for early intervention for all kindergartners, as our society struggles to balance achievement gaps, ever earlier and stronger achievement expectations, and high student-teacher ratios in Transitional K programs, as well as for evidence-based intervention for 4-year-olds with bona fide A.D.H.D.”

“On the other hand, if this is the ticket for overzealous labeling of kids, mainly boys, who are simply needing more time to mature, that’s not what we need,” Dr. Hinshaw said.