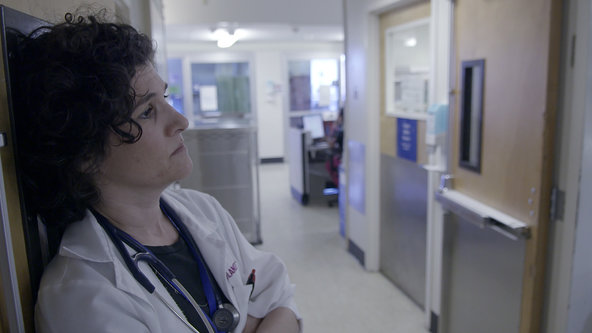 Jessica Nutik Zitter is featured in the upcoming Netflix documentary “Extremis,” premiering at the Tribeca Film Festival on Sunday.Credit

There was absolutely no way around it. She was dying. I gave her a few hours at best, with maximum pedal to the metal intensive medical care. Paramedics had picked up this homeless woman after she collapsed under a bridge in Oakland, Calif. Her heart had completely stopped. She had died under that bridge. But the paramedics had somehow pulled her back, with a jump-start to her heart. And then brought her right to my service in the intensive care unit.

She had no known family, and the police were trying to track down anybody who could speak for her. No luck so far, the social worker told me.

She was emaciated, with an incongruously large, round belly, hard as a basketball. Her hair was knotted and tufted, her lips cracked and dry around the breathing tube. By the time I saw her, she had already been treated by many health care professionals. They had done CT scans, inserted large catheters into larger veins, and started various drips.

Now it was my turn to take over.

The situation was dismal. This 51-year-old woman had all of the dreaded and irreversible complications that come with chronic alcoholism. Crucial organs were failing. Her liver, the organ that produces the sugars needed for life as well as for clotting and detoxifying the blood, was almost completely shut down. Now a tight nub of scar tissue, it functioned like a clogged sieve, preventing fluid from returning to the heart. And so liters of it pooled in her abdomen, giving her the look of a woman in her final days of pregnancy. Her pancreas was in tatters from repeated bouts of alcohol-induced pancreatitis over the years. Her kidneys had been limping along for months on the verge of failure, and had now completely shut down.

And on top of all this, she was in profound shock, her blood pressure having sunk to the lowest readings attainable, despite being “maxed out” on blood pressure support medications. Shock can have a few different causes. And we medical detectives, like those on the TV show “House,” are driven to narrow down the possibilities until we arrive at an answer. We order numerous tests, many of which are risky and painful. For dying patients, these tests often don’t provide helpful information anyway — they rarely change the outcome, and may even kill the patient.

And there was no doubt this woman was dying.

As if this scenario weren’t awful enough, her brain was profoundly and irreversibly damaged. The CT scan of her head painted a grim picture. The cells of her cerebral cortex, those which give us our personhood, consciousness, cognition and independence, were swollen and dying, and there was no chance of reserving it. She would never again wake up.

But it’s not that simple for an I.C.U. doctor. Our training urges us on, even when it is clear our patient is dying, and especially if there is no family to consent to putting the brakes on.

And so my intensive care instincts urged me on. There were many things I could imagine doing. Lowering the acid level in the blood with bicarbonate, draining the fluid from her belly, increasing the blood pressure medications, starting dialysis. I watched as my residents ran in and out of the room, procuring the various catheter kits that would be threaded into her body to perform these functions.

But I felt another pull too, from another part of my medical training — palliative care. This specialty had taught me an approach to the care of suffering and dying patients that differed from the one I’d learned in my I.C.U. training. Over the years I had come to see that the interventions I performed in the name of lifesaving often didn’t help my patients, but rather compounded their distress, without significant benefit.

I told my residents we needed to talk.

We convened outside the room. They hovered around me like hummingbirds, barely able to stand still. They were on autopilot, I saw; the impetus to do something was tremendous. I recognized their agitation, and understood how self soothing action — any action — would be.

“Let’s talk about how that’s going to help,” I said, pointing to one of the catheter kits.

The senior resident stared at me, dumbfounded. She had a job to do, and I was restraining her. There were still unanswered questions. There was a diagnosis to pursue, an acidosis to correct, a big belly to consider deflating.

“But will those answers change anything?” I asked

They kept coming up with new suggestions. With each, I asked them how it would change our course. Perhaps I was hoping they could convince me that there was something more we could do to save this woman. Yet the patient was already on maximal treatment, and she was still dying. My resident argued that the right thing to do was to try to keep the patient’s body alive until family came. But our social workers had not found any trace of family after an exhaustive search.

One thing we could do, I pointed out, was to treat her for pain and anxiety. Even though she was completely unresponsive, she may still have been aware of them on some level. These well-meaning doctors had been taught that the priority was curing the disease, and hadn’t thought of treating symptoms.

I too felt most comfortable when I was doing something to address each medical problem. Even if, in the back of my mind, I didn’t expect it to help. Refraining from action went against all of my medical instincts.

And so often, when a patient is actively dying, I must hold myself and my residents back, quiet our itchy fingers, and acknowledge that we find ourselves in the uncomfortable position of waiting for nature to take its course.

For the next several hours, as the patient lay tethered to the machines, we sat on our hands. Because we hadn’t located any family, I didn’t withdraw any existing treatments. But I didn’t let my residents initiate any new ones, either. Not the blood gas, nor the Quinton catheter, nor the arterial line. Instead, I started a careful dose of pain and sedation medications. We would stay the course.

She died within a few hours. It was a case I don’t think any of us will forget. But I believe we did right by our patient. We acknowledged that we couldn’t save her, and resisted the urge to treat her untreatable disease — and instead treated her suffering.

Jessica Nutik Zitter is a critical care and palliative care physician at Highland Hospital in Oakland, Calif. She is writing a book about her work, and is featured in “Extremis,” a documentary by Dan Krauss, which debuts April 17 at the 2016 Tribeca Film Festival.