As a health care journalist in Los Angeles reporting on the pandemic, I knew exactly what I needed to do once I landed in the hospital with covid pneumonia: write my goodbye emails.

I’d seen coverage of some final covid messages during this terrible year. They were usually directed to spouses, but my No. 1 concern was how to explain my own death to my 3-year-old, Marigold, whom we call “Goldie.” How much of me would she remember, and how would she make peace with what happened to me, when I could barely believe it myself?

After the emergency room doctor confirmed pneumonia in both of my lungs on Dec. 17, I was whisked upstairs to the hospital’s covid unit, where I got a blood thinner injection, infusions of steroids and remdesivir, and continued on the supplemental oxygen they had started in the ER.

Immediately after the treatments, my mind was clearer and more focused than it had been in the nine days since my husband, daughter and I had all received positive covid results (and when my raging fevers began). As I lay in my hospital bed, my roommate’s TV blaring, I started thinking about my daughter’s understanding of death. A lapsed evangelical married to a Jewish man, I had adopted his family’s perspective on the afterlife — that discussing it wasn’t very important — but had also inadvertently abdicated the death discussion to Hollywood.

Goldie’s afterlife education began with the movie “Coco,” about the Mexican Day of the Dead, in which families put pictures of their ancestors on a home altar, or ofrenda. Then came “Over the Moon,” in 2020, about a little girl in China who loses her mom to illness and struggles to accept a new stepmother, all while her mom’s spirit visits her in the form of a crane.

That prompted her first question about my death.

“Are you going to die like Fei Fei’s mom did?” Goldie asked me in November, before I got sick. I told her at the time that no one knows when they’re going to die, but that I would love her with all of my heart for as long as I lived.

After that, Goldie would sometimes randomly declare, “I don’t think you’re going to die,” or she would ask if we could all die together, at the same time — to which I’d say, “Sure!”

My covid symptoms started Dec. 7, and we got our positive results back the next morning. Thankfully, my husband and daughter had almost no symptoms except stuffy noses and a day of low fever. But I started off with a fever that would burn me up to 104 degrees, over and over again. Tylenol and Advil could bring it down only to 100 or 101. I would cry as the painful fevers reached their peak and wondered if God had been preparing Goldie all along this year for my eventual death.

My breathing problems began eight days later. The scariest moment during that time was when I was in the middle of a shower (much needed after days of sweaty fevers) and realized I was gasping for air. I punched the shower curtains out of my way and ran to my bed, where I could lie on my stomach and get my oxygen levels up again. As I lay there, hyperventilating, soaking wet, with shampoo still in my hair, the pulse oximeter monitor registered 67, before inching back up to 92. I began thinking of what I wanted to say to Goldie in my final letter to her, but I was too weak to type it out.

This sped-up video shows Anna proning on a bean bag and pillows in order to keep her oxygen saturation levels in the 90s. Anna lived like this for two days before being hospitalized. (Simon Ganz)

How to explain hubris, or was it foolhardiness, to a toddler? That in our loving quest to give her a “forever friend,” a sibling to grow up with and play with and fight with and commiserate with, my husband and I had been like two moths circling a flame, ramping up our fertility treatments even as the pandemic picked up speed in Los Angeles?

But here was my thinking: I’m 35, I want a second child, we’re very infertile, and we don’t have time to waste. This was my secret driving force in 2020, even as my colleagues reported on how elective medical procedures were siphoning resources and PPE from the covid effort, and how patients were avoiding medical appointments of all kinds to avoid accidental exposure to the coronavirus.

I also thought that I should be using this pandemic year “productively.” And what could be more productive than reproduction? I wanted to use my time wisely by growing another human being while we were all stuck indoors and blessed with jobs we could perform from home.

In March, I had a procedure to remove some uterine polyps to prepare for an embryo transfer. Back then, covid cases weren’t being regularly reported. 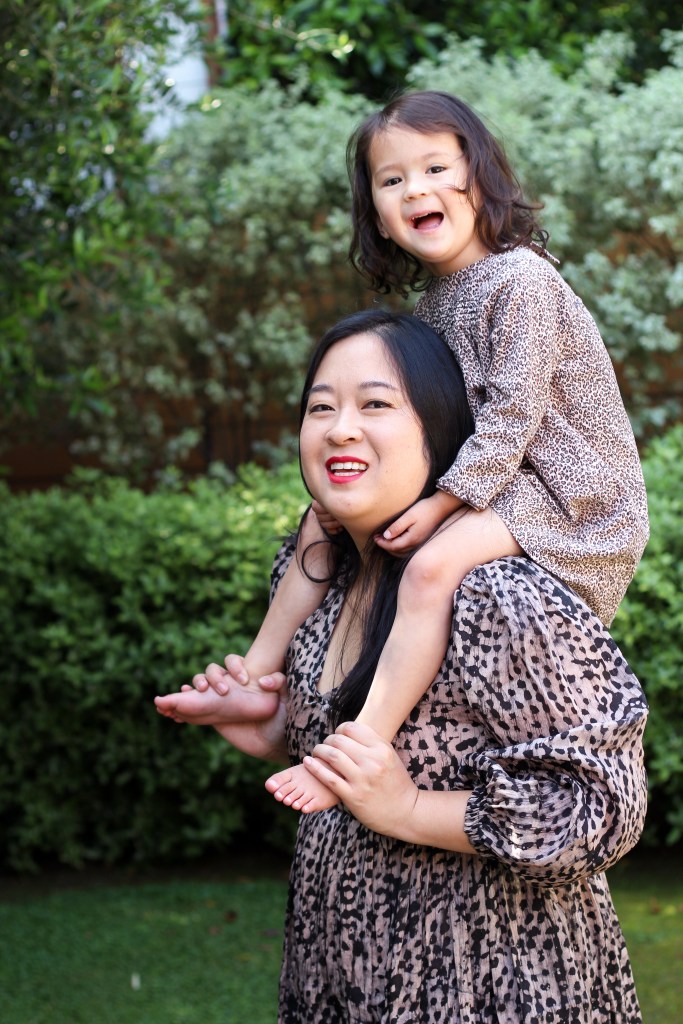 Anna and Goldie on Mother’s Day. At that point in the year, Anna was undergoing fertility treatments to prepare for a future embryo transfer. (Simon Ganz)

Two more uterine procedures led to a successful embryo transfer, but a miscarriage put me in the ER on Oct. 8. By then, Los Angeles County had seen 278,665 cases and 6,726 deaths — horrifying numbers that I monitored and reported on as a health journalist, but data points I couldn’t, or wouldn’t, use to alter the decision-making in my own life.

With four miscarriages now under my belt and no more viable embryos left to use, my husband, Simon, and I decided we’d give in vitro fertilization one final try. I started my injections for an egg retrieval in late November, and by the time the procedure rolled around on Dec. 3, L.A. was well into its scary, almost vertical holiday season ascent, posting 7,854 new cases that day — up fivefold from a month earlier.

A close friend was supposed to start her IVF injections at the same time, but she decided to postpone at the last minute because covid cases were so high in our area. By that point, we were so driven in our pursuing of pregnancy that I was startled to hear her say that, as the thought had never even crossed my mind.

I have no way of knowing for sure if I was exposed to the virus sometime during this last fertility treatment. The surgical center is located on a large medical campus that also hosts a covid-19 testing drive-thru in the garage where we parked. We waited, masks on, for almost an hour outside the building, which we thought was a safer choice than the fertility clinic waiting room, but that actually put us in proximity to a lot of sick people waiting for rides home.

I also had to remove my mask just before the actual egg retrieval, because I was under anesthesia and the doctors needed quick access to my mouth in case I needed a breathing tube.

Five days after the egg retrieval, we found out we were covid-positive. I called the clinic right away to warn them; the fertility doctor told me a few days later that none of her staffers had gotten sick. And also that none of the eggs they retrieved from me had developed properly. We had no embryos to use.

Of course, as anyone who has done fertility treatments knows, all the dangers and risks we undertook would have been “worth it” if it had worked. Because it didn’t work for us, I felt defeated and foolish.

In sum, we wanted to give Goldie a sibling, but attempting to do so may have been what threatened her mother’s life. This thought haunts me and will stay with me forever, even though I’ll never know how exactly the virus entered our home.

Our nanny, who also experienced covid symptoms and tested positive three days before us, could have picked it up at the supermarket. We could have gotten it from her or while walking around our neighborhood or playing in the park. But the act of choosing, over and over again, to engage in fertility treatments as the pandemic raged on, fills me with doubt and remorse.

This was all too much to put in my goodbye letter to Goldie. Instead, this is some of what I wrote:

Around Halloween, you and I were eating breakfast together and I asked you how your life was going, and if there were any improvements I could make for you. You said, with absolute seriousness, “I’m afraid of ghosts.”

Now that I’m a ghost, I hope there’s less reason to be afraid.

Please put my picture on the ofrenda once a year. I’ll always be in your heart and in your memories. I will try to visit you too. But not in a spooky way, just a gentle way.

I will always love you. Thank you so much for being born to us. You made everything better.

After finishing my goodbye letter, I went to sleep. In the morning, I woke up, got a second infusion of steroids and remdesivir, and then was released home with oxygen tanks and an oxygen concentrator. I stayed in bed, on oxygen, for another week before my lungs were strong enough for me to stand and walk on my own. We had a wonderful Christmas morning together opening presents during a Zoom call with my family. Other than fatigue, I am now almost back to normal.

After the holidays, I sat down with Goldie for breakfast as we usually do. Feeling morose about how the year had turned out, I asked, dreading her response, if she would like to have a baby brother or sister one day. 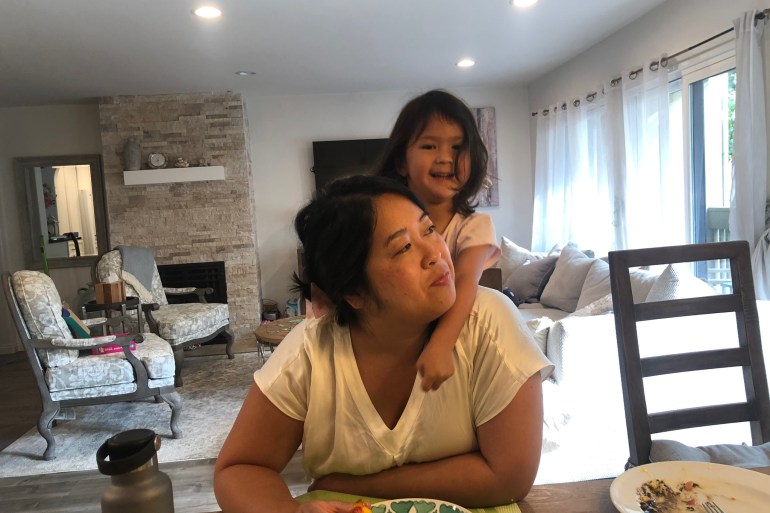 Anna and Goldie on Aug. 27, 2020, about one month before the embryo transfer that ended in miscarriage. (Simon Ganz) 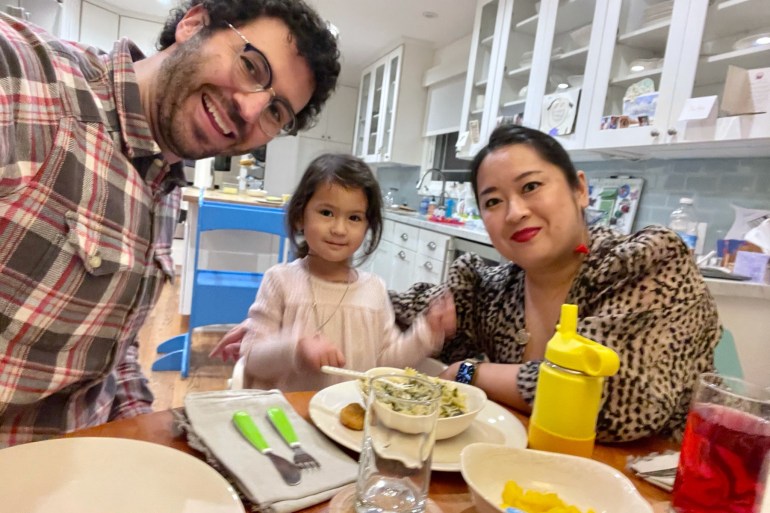 Simon Ganz, Goldie and Anna pose for a picture on New Year’s Eve. By then, Anna had been off oxygen for three days and was quickly regaining strength. (Simon Ganz)

She put her hand on my neck and pressed her forehead into mine, a face-to-face embrace that we call a “pumpkin hug.”

I took a deep breath, and then sighed with relief.