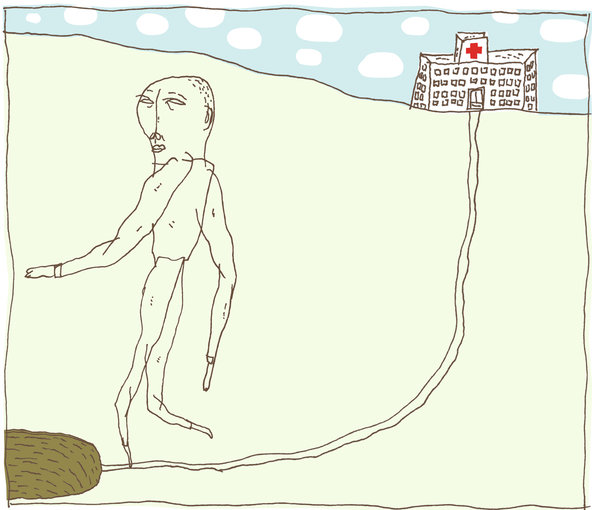 A 37-year-old man was admitted to a hospital several months ago with seizures. His M.R.I. was frightening, showing a brain full of holes. Medication controlled the seizures, but the drugs were just Band-Aids on a big, undiagnosed problem.

The patient was not particularly alarmed (which in itself was fairly alarming). His brain was riddled with infection or tumor, but all he wanted to do was get out of the hospital and go back to his life.

By all accounts, it was a troubled, isolated, drug-ridden existence in a fleabag hotel, a life free from anything resembling regular medical care. Still, he was ready to be on his way.

The only way to diagnose his problem was a brain biopsy. “Anything to get out of here,” the patient said, and signed a consent form.

The biopsy was performed uneventfully, and small specimens of the abnormal tissue were sent to the lab for a diagnosis. That was on a Friday.

By Monday, everyone was ready for an answer. By Tuesday, it was hard to tell who was more impatient, the patient pacing the hallways or his doctors pestering the lab.

On Wednesday, with the specimens still being processed and another weekend looming, the case had attracted the notice of the administrators known in hospital vernacular as the discharge police.

Within minutes, it seemed, the patient was out of that expensive acute-care bed and on his way to the subway, clutching a thick sheaf of instructions, appointment slips and prescriptions, still without a diagnosis, brain full of holes, but free at last.

Your reaction to this story will almost certainly depend on your understanding of the word “hospital.” The word has connotations of care and comfort dating to the Middle Ages, but its meaning is changing so quickly that even the people who work in one cannot agree on what it is.

Hospitals were where you stayed when you were too sick to survive at home; now you go home anyway, cobbling together your own nursing services from friends, relatives and drop-in professionals.

Once hospitals were where you were kept if you were a danger to yourself or others. They still serve this function — although, perhaps, the standards for predicting these dire outcomes have tightened up quite a bit.

These days, it may be easier to define hospitals by what they are not. They are not places for the sick to get well, not unless healing takes place in the brief interval of time that makes the stay a compensated expense.

Hospitals are definitely not places for unusual medical conditions to be figured out, not if the patient is well enough to leave.

Like the hospital, the patient with holes in his brain was also a puzzle of ill-defined words. He was very sick, yet not all that sick. Whether he could survive at home depended strongly on the meaning of “survive” and “home.”

He was well enough to be an outpatient, but he was far from well, and had never managed to be a successful outpatient. He was not suicidal, at least not in any immediate sense. The big holes in his brain made it even less likely that he would adhere to the complicated instructions for his new outpatient life.

But then again, a hospital is a place where hope reliably springs eternal.

The patient’s young doctors certainly hoped for the best for him. They gave him a slew of prescriptions, and expressed their hopes that he would take the pills and keep his far-flung appointments, at one of which his brain biopsy report would be retrieved and his medications adjusted accordingly.

Not so long ago, the multiple ambiguities of this patient’s case would have kept him in the hospital until at least some of the uncertainty had been resolved. In fact, it would have been considered close to malpractice to let a patient like him out the door. Now it is considered downright medieval to keep him in.

I’m sure you would like to know what happened to the patient. His doctors would, too, but he is missing. His phone goes unanswered. The name of an emergency contact is blank in his records — he refused to provide one.

It’s anyone’s guess if he filled his prescriptions. He kept none of the appointments made for him.

The results of his biopsy showed a perfectly treatable condition, an infection that the pills he was sent home with should have helped. Perhaps he got better, perhaps not.

The young doctors will never know if they managed his case correctly — that’s “manage” in its medical sense. In the word’s other senses (“succeed despite difficulty” among them), they now have a reasonably good sense of how they failed.