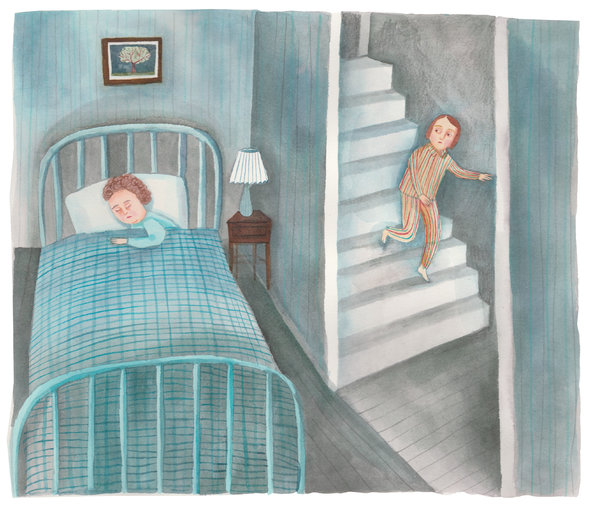 A depressed mother hates noise. She hates a lot of things — sometimes it seems as if she hates everything. But noise is her particular enemy. This is because she needs her sleep. She doesn’t always seem tired. But sleep is sacred to her, and you must never interfere with it. Particularly in the mornings. This makes life complicated if your bedroom — the nursery — is directly above hers and the floors are covered in linoleum, as they are in London in the 1960s. When you wake up and need to go to the bathroom you must avoid certain creaky spots. So you navigate like a cat burglar, tiptoeing on the more solid sections until you get to the stairs down to the bathroom. You hold your breath as you pee as if not breathing will somehow mitigate the sound. Do you flush? Not at this ungodly hour.

Silence is what your mother craves, but it is also her weapon. When she is in one of her moods, she settles into a powerful silence. She actively ignores you. She doesn’t respond to your attempts at conversation, your questions, your pathetic efforts to amuse her, to cheer her up. It’s as if you don’t exist, even when you’re in the same room. Over the years you learn what can trigger these silences and you do everything you can to avoid them. But when they inevitably settle in, it’s as if the world as you know it comes to an end.

Your mother’s depression, previously intermittent yet intense, has settled in with a permanence since your father left the house and your parents announced they would be getting divorced. You’ve always known she suffered from the blackest of moods. Your father has told you the story of your younger brother’s birth, and how he wanted the new baby christened Sebastian. But because your mother “wasn’t speaking” to your father throughout the period between birth and baptism, your brother is now called Paul.

Paul is the person you go to after you’ve been to the bathroom. He’s a little boy, just 4, and at three and a half years his senior it’s your responsibility to put him in his uniform, tie his tie and get him down to the kitchen where you make his breakfast. Your mother can’t tie a tie. And she doesn’t get up for breakfast. She doesn’t get up to see you off to school. The two of you eat quietly, grab your anoraks and having quietly shut the front door behind you, walk together. Recently, Paul has begun to stutter. Eventually he will be taken to a specialist who will try to find out the cause. Your father says he used to stutter a bit as a boy, too, and often imitates Paul. This drives you mad.

It’s hard to remember when you decided that you don’t love your mother. But there is a definite line in the sand when you become her fiercest critic. You hate her arbitrary moods. You hate her selfishness. You hate her neglect. Being depressed and being maternal don’t exactly go hand in hand. A depressed mother rarely puts her children first. For example, if on a Saturday morning you’ve been told to stay upstairs until your mother says you can come down, don’t (dying of boredom) find a rubber ball and start to play catch with it by yourself. Because every so often you’ll drop it. Eventually there will be a roar of rage from below. “GIVE ME THAT BALL,” she’ll yell. As you silently hand it to her, she will shout in your face, “GET DRESSED! AND GET DOWNSTAIRS!”

You’ll put on your clothes and creep down to the hallway with Paul. The two of you will half run, struggling to keep up with her as she marches rapidly and in silence out of the house and into Hyde Park about 10 minutes away. As you cross the street into the park she’ll hurl the ball into the trees.

Having a depressed mother is an excellent way to turn a child into a liar. It’s completely against your nature, but some instinct in you makes you aware that there are some things your mother just can’t handle. So you lie by omission — you don’t tell her a lot of the fun things you do with your father. You’re hardly aware that you do this, until a few years later when Paul tells you he finds it easier to lie than to tell the truth. He’s more used to it.

Is it the lying that causes you anxiety? Or is it the general atmosphere in the house? Anxiety is the air you breathe, and it constantly affects how your body works. You’re supposed to put your light out at 7:30 at night, but sleep doesn’t come easily now, so you put your lamp under the covers and read for another two hours or so. Sometimes when you have to go to the bathroom you are too scared to, so you have accidents. You throw up from nerves. You watch yourself as if from a distance, interested in the experience, making a mental note of it.

You make mental notes of everything. (Having a depressed mother is great training for a journalist.) You note when the fridge is empty to get your mother to call the grocers. Your first experience of actual note-taking is when you decide to make shopping lists for her. You see when the laundry hamper is three-quarters full so you can start encouraging her to get the washing done. When she ignores you and you run out of clean underwear, you turn your dirty underwear inside out.

Routine is extremely important to children of depressed mothers. The clock becomes the nanny. Any deviation from a schedule is not to be allowed. The moment tea is over you take Paul upstairs for bathtime. You lay out your grubby clothes for tomorrow, and you brush your teeth. You go downstairs to say goodnight to your mother, now in her best mood of the day. There is a drink in her hand. She laughs as she allows the two of you to jump on her bed.

Then she says goodnight, and up you go to bed where you read about jolly red-cheeked children with fathers who smoke pipes and mothers who bake pies, wearing aprons over their tweed skirts, until you fall asleep.

Emma Gilbey Keller is a journalist and author who is working on a memoir about her experience of motherhood, from which this essay is adapted.