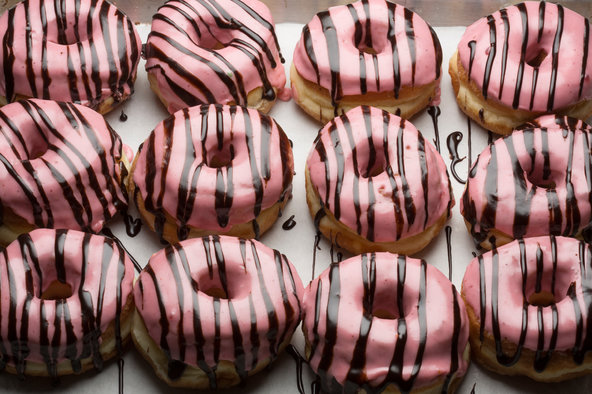 At a time when almost three-quarters of the country is overweight or obese, it comes as no surprise that junk foods are the largest source of calories in the American diet. Topping the list are grain-based desserts like cookies, doughnuts and granola bars. (Yes, granola bars are dessert.)

That’s according to data from the federal government, which says that breads, sugary drinks, pizza, pasta dishes and “dairy desserts” like ice cream are also among Americans’ top 10 sources of calories.

What do these foods have in common? They are largely the products of seven crops and farm foods — corn, soybeans, wheat, rice, sorghum, milk and meat — that are heavily subsidized by the federal government, ensuring that junk foods are cheap and plentiful, experts say.

Between 1995 and 2010, the government doled out $170 billion in agricultural subsidies to finance the production of these foods, the latter two in part through subsidies on feed grains. While many of these foods are not inherently unhealthy, only a small percentage of them are eaten as is. Most are used as feed for livestock, turned into biofuels or converted to cheap products and additives like corn sweeteners, industrial oils, processed meats and refined carbohydrates. 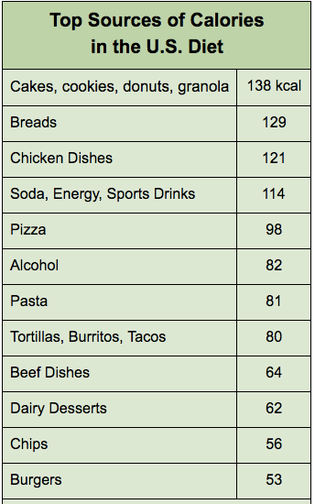 Health advocates have long pointed out this seeming contradiction. While the federal government recommends that people fill half their plates with fruits and vegetables to help prevent obesity, only a small fraction of its subsidies actually support the production of fresh produce. The vast majority of agricultural subsidies go instead to commodity crops that are processed into many of the foods that are linked to the obesity crisis.

“The subsidies damage our country’s health and increase the medical costs that will ultimately need to be paid to treat the effects of the obesity epidemic,” a 2012 report from the U.S. Public Interest Research Group, a nonprofit consumer advocacy organization, concluded. “Taxpayers are paying for the privilege of making our country sick.”

Now federal health researchers have examined the relationship between metabolic disease and the consumption of federally subsidized foods.

The study, led by a team at the Centers for Disease Control and Prevention and published this month in JAMA Internal Medicine, looked at over 10,000 adults and the foods they reported eating in a typical day. Then the researchers split the subjects into groups according to the proportion of foods they ate that were derived from the seven major subsidized commodities.

After adjusting for age, sex, socioeconomic factors and other variables, the researchers found that those who had the highest consumption of federally subsidized foods had a 37 percent greater risk of being obese. They were also significantly more likely to have belly fat, abnormal cholesterol, and high levels of blood sugar and CRP, a marker of inflammation.

While the study does not prove cause and effect, its authors say that this strong association is consistent with other research showing that diets that are higher in subsidized foods tend to be poorer quality and more harmful to health.

“This tells us that the factors that influence the prices of our foods are an additional factor,” said Ed Gregg, chief of the epidemiology and statistics branch in the C.D.C.’s Division of Diabetes Translation. “We’re hoping that this information reaches policy makers and the people who influence how subsidies work.”

The subsidies program was started decades ago in part to support struggling farmers and to secure America’s food supply. Since 1995, the government has provided farmers with close to $300 billion in agricultural subsidies overall, which are included in the federal farm bill, along with money for nutrition initiatives like the federal food stamps program, known as SNAP. The farm bill is renewed by Congress every five years and is projected to cost $956 billion between 2014 and 2023.

But critics say the subsidies program no longer serves its original purpose. Instead of supporting small farmers who grow fruits, nuts and vegetables – which the government calls “specialty crops” — the program now primarily subsidizes large producers that churn out a handful of “commodity” crops that include grains, corn, sorghum and oilseeds like soybeans.

According to the Government Accountability Office, small “specialty” farms represent three-quarters of the country’s cropland but receive just 14 percent of government subsidies. Large agribusinesses that specialize in growing the major commodity crops represent 7 percent of the cropland and receive about half of all subsidies.

Previous versions of the farm bill even stipulated that farmers who took subsidies for commodity crops could not grow fruits and vegetables. If they did, they were penalized, said Caroline Franck, the co-author of a 2012 report in the Archives of Internal Medicine that explored the role of agricultural subsidies in obesity.

Ms. Franck, a research assistant at the Lady Davis Institute for Medical Research of the Jewish General Hospital, McGill University, said many factors influence what people choose to eat. While it’s difficult to argue that subsidies are a direct cause of obesity, they clearly play a role.

In part because of public pressure, the last farm bill, which was passed in 2014, allowed farmers who grow commodity crops to use 15 percent of their acreage to grow fruits, vegetables and other specialty crops. It provided support to organic farmers, including $100 million for research to improve organic production. And it funded a “healthy incentives” program that encourages food stamp recipients to consume more fruits and vegetables by increasing the value of food stamps that are used to buy fresh produce at retail stores or farmers’ markets.

Ms. Franck said that early results suggest that the program is increasing the amount of fresh produce people consume. But others are not so sanguine. Raj Patel, a research professor at the Lyndon B. Johnson School of Public Affairs at the University of Texas at Austin, said that the funding for fruits and vegetables in the most recent farm bill was “crumbs” compared to the billions in subsidies for commodity crops.

Dr. Patel said it was time for the federal government to adopt a “national food policy” like one that has been proposed by the Union of Concerned Scientists, a nonprofit advocacy group. Among other things, a national food policy would ensure that farm workers receive fair wages, that all Americans have access to healthy foods, and that the government’s nutrition recommendations and agricultural policies are aligned, he said.

“It would transition us away from the unhealthy consequences of the current industrial food policy,” he said. “I think there’s something very broken about the subsidy system.”