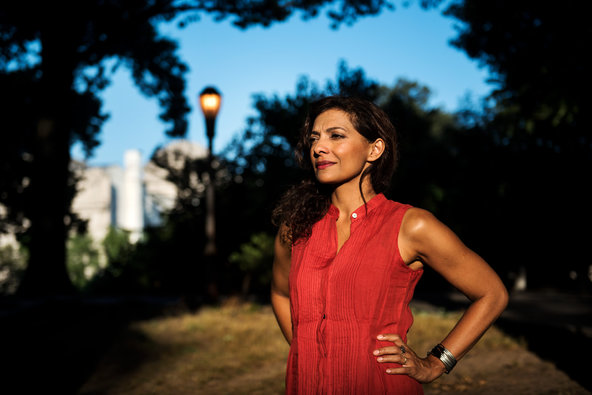 After Mellini Kantayya, an actress who lives in Brooklyn, chatted with her Facebook friends in July about the high cost of EpiPens, she knew she had to do something.

A friend in Connecticut, the mother of a child with food allergies, was facing a $600 bill for the product, an injector that delivers a lifesaving dose of epinephrine to reverse severe allergic reactions. She’d also just seen an article from the health website STAT about ambulance crews that couldn’t afford EpiPens because the price had surged by more than 500 percent in recent years.

“It just felt nefarious,” said Ms. Kantayya, whose health insurance covers the cost of EpiPens for her husband, who has an allergic condition. “Just because we’re not paying for it, we’re still paying for it in terms of social cost,” she said. Then she thought, ‘Why don’t I do a petition, and maybe something will be done about this.’”

She went online to Petition2Congress.com, a service that collects signatures and then sends them to designated lawmakers, and created the petition “Stop the EpiPen Price Gouging,” which went live on July 11.

Then Ms. Kantaya shared the link with her 836 Facebook friends, with a post that began, “Stupid pharmaceutical company!”

What happened next is a lesson in the power of social media to create a groundswell, particularly among a group as committed and motivated as the parents of children with food allergies, who must often buy multiple pens for home, school and day care. In just 45 days, Ms. Kantayya’s petition grew from a few dozen signatures to more than 70,000 people who sent more than 100,000 letters to Congress.

So how did the EpiPen come to epitomize unfair drug pricing? While the price of the EpiPen didn’t increase overnight, data show that Mylan has been steadily increasing prices, first in increments of about 10 percent, once or twice a year, but more recently imposing 15 percent increases. This summer, as parents bought EpiPens for summer camp and back to school, many were paying higher out-of-pocket costs because of high deductibles and copayments imposed by insurance companies.

“I think Mylan just pushed it too far,” said Robyn O’Brien of Lafayette, Colo., a well known parent activist and writer with a strong social media following. “It hit a price point for this year for back to school where parents absolutely revolted.”

One of them was Jennifer Vallez, an illustrator in Ellington, Conn., whose 9-year-old daughter Lola has a peanut and tree nut allergy. Her insurance policy has a $2,000 deductible, and as she went to refill an EpiPen prescription, her pharmacist told her the cost would be $600.

“It’s just morally so wrong,” said Ms. Vallez, a high school friend of Ms. Kantayya and the second person to sign the petition. She also shared it with her 533 Facebook friends. “I have a lot of friends with children with allergies, so we all are pretty adamant about this kind of stuff and support each other,” she said.

Meanwhile, Ms. O’Brien, who founded AllergyKids.com and authored a popular book on the food industry called “The Unhealthy Truth,” began hearing more concerns about EpiPens from her 165,000 followers on Facebook and Twitter.

“Something has to be done, so we are doing it,” she wrote on July 21 on her public Facebook page. “Stay tuned and read about the price gouging of American parents.” The post was shared 727 times.

A week later, Georgina Cornago Cipriano, whose son Giovanni died at age 14 as a result of a food allergy, posted an article on Ms. O’Brien’s website about Mylan’s “EpiPen profiteering.”

Ms. O’Brien continued to press the issue online, as parents began posting receipts showing how much they were paying for EpiPens. One photo showed a Costco pharmacy receipt from Chandler, Ariz., for $1,698.28 that a parent had paid for three boxes of EpiPens, six pens total. A single mother from New Hampshire had a receipt for $925 for a two-pack of EpiPens.

On August 17, both Ms. O’Brien and another parent activist, Becky Bergman of the website Peanut Allergy Mom, urged their readers to sign Ms. Kantayya’s petition. Signatures surged by 10,000 people, reaching 16,719 by the next day.

And then Ms. O’Brien coined the hashtag #EpiGate, and it stuck. More media outlets also began covering the price increase.

Bernie Sanders weighed in on Twitter as he shared a story from NBC: “There’s no reason an EpiPen, which costs Mylan just a few dollars to make, should cost families more than $600.” It was retweeted 8,789 times and reached nearly 2.8 million people, according to CrowdTangle.

By Monday, the story of overpriced EpiPens was in full force, covered by numerous media outlets, including The Times, USA Today and the Today Show. Senator Charles Grassley, the Iowa Republican who leads the Judiciary Committee, demanded an explanation from Mylan for the price increase. Senator Amy Klobuchar, Democrat of Minnesota, who has a daughter with allergies who carries an EpiPen, called for a Judiciary Committee inquiry into the pricing and an investigation by the Federal Trade Commission.

What’s so unusual about the pricing furor is that it has almost single-handedly been orchestrated by parents and family members of people who use EpiPens. Patient advocacy groups, who typically are vocal on all issues related to food allergies, have been largely silent.

Some of the most prominent groups — Food Allergy Research & Education (FARE); the Asthma and Allergy Foundation of America (AAFA); and Allergy & Asthma Network — all have partnerships with Mylan for patient awareness campaigns and other programming. The groups aren’t required to disclose how much money they receive from the drug company, but Mylan, in its 2015 Social Responsibility report, lists all three groups as “allies.”

Since 2011, Mylan says it has provided more than $10 million in funding for “educational efforts,” such as sponsorships and grants, and has received corporate citizen awards from FARE and the Allergy & Asthma Network.

While the groups have not taken a prominent public stand on the issue, they say they have been working behind the scenes with Mylan to expand its assistance program to help families obtain EpiPens at a lower out-of-pocket cost.

Tonya Winders, president and chief executive of the Allergy & Asthma Network, said she began meeting with Mylan officials in March to talk about pricing issues. “I’ve gone all the way to the C.E.O. of Mylan with the conversation,” said Ms. Winders.

Dr. Cary Sennett, the chief executive of AAFA, said the group met with Mylan earlier this week. “They know our concerns about pricing and affordability,” he said.