I was a year into my marriage, three years into my thirties, and thinking a lot about children — whether we would have them, how they would alter our life — when my parents called to say they were selling the house I grew up in. My sister and I were summoned home to clear out our belongings.

Having spent my entire adulthood living in New York apartments, I’ve learned not to be sentimental about objects. So I didn’t dig deep. Didn’t search through the cluttered attic or the basement. I only looked as far as my bedroom closet. The things I kept filled one small box. I knew there was no in-between. If I didn’t return to Brooklyn with just that one small box, my husband Kevin and I would currently be sitting in a two-bedroom apartment full of Madame Alexander dolls and My Little Ponies, with a New Kids on the Block poster on the living room wall.

My parents were downsizing. My father said the only things he was sad to part with were his books. Kevin and I tried to put him at ease. We explained that book lovers who live in small spaces must be ruthless. Every few months, when we notice our shelves overflowing, we make a trip to Goodwill.

Of course, there are some books we will never discard. When I went to college, I brought along the ones I had loved as a teenager. They stayed with me when I moved to New York, even though I changed addresses three times before I had enough space to unpack them.

The books I loved as a child weren’t important to me when I moved away at 18. They got left behind at my parents’ house. When they moved, those books were donated with the rest. I didn’t miss anything else. But the ache for the books of my childhood came on fast once they were gone, a sudden flood of regret. At the time, I made no connection between the sensation and my preoccupation with potential parenthood. I just felt as if I’d made a horrible mistake.

Then a gift from my father arrived in the mail. He had rescued a few of my favorites. Robert McCloskey’s “Blueberries for Sal.” “The Polar Express.” “Katie and the Smallest Bear,” inscribed with a note in my mother’s handwriting, marking its purchase in Camden, Me. on May 4, 1986, three months before my fifth birthday. I was overjoyed to be reunited with those books. But they made me long for the ones I hadn’t saved.

Slowly, without giving much thought as to why, I started rebuilding my collection. I bought “The Blue-Nosed Witch” by Margaret Embry online for a penny. On vacation, I found a dusty old Trixie Belden mystery at a junk store. I ordered a copy of “Ivy Cottage,” apparently quite rare now, and expensive. (When the internet bookseller saw I was interested, he sent a note quadrupling the price.) One night, I purchased “Tiggy and the Giant Wave” for $19 and imagined the people who sell such things convening somewhere, talking shop: “Have you noticed the sudden interest in picture books from the 1980s that no one has thought about in ages?”

Each book had to be the same version I had owned. Most were around 30 years old. When you’re dealing with used books that once belonged to children, even those listed as “like new” are worn. A stray crayon mark or a torn page is not a sign of neglect, but of love.

Often, a title came to me unbidden while I was making dinner or walking the dog. Immediately, I’d go online to seek it out. Sometimes I couldn’t recall the name, only some aspect of the plot. Which is how I stumbled on the website Old Children’s Books, and discovered that I wasn’t alone in this pursuit.

On one occasion, I found a Post-it note stuck to my bed, on which, in the middle of the night, I had scribbled: Stuart Little! Another time, I came across “Mary Poppins” on TV, and felt the strongest desire for the book version of the story — a perfect square, with watercolor illustrations, which I had cherished. On eBay, there were over a thousand options listed under Mary Poppins Book. I accidentally bought two others before finding the right one. On the inside cover, in a mother’s careful cursive, was written: Tony, 1973. I wondered if mothers like Tony’s and mine did this out of a sense that childhood is fleeting, that it’s essential to document even the smallest moments.

I realized then that the collection I was reassembling wasn’t for me. Would I ever have children? Did I want to? The colorful books piling up everywhere on an otherwise tidy bookcase were the answer.

Not long after, a friend’s daughter, Ella, invited me to speak to her second grade class about my work as a writer. Questions included: Did you write “The Magic School Bus”? How much money do you make? Are you famous? When Ella showed the cover of my book “Maine,” a picture of a barelegged woman reclining on a beach, two boys shouted, “That’s inappropriate!”

“Did you draw that cover?” they asked. 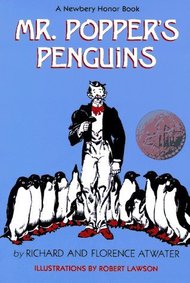 When I explained that no, I only wrote the words inside, they seemed a bit embarrassed for me. “That’s it?”

I understood completely. Childhood is where a love of reading is forged through the tactile. The stories themselves matter, of course. Sometimes I think about Beverly Cleary’s “Ramona,”with her tubes of toothpaste, her bites of apple. Nothing I’ve read since, no single image, stands out as these do. But in adulthood, it’s always the text I admire. In childhood, the book as object matters most.

I found out I was having a baby last October. For months, my home office was in transition to becoming a nursery, a chaotic mishmash of paperwork and drafts of my latest novel, mixed in with a crib, a mattress still in its box, bags of hand-me-downs. The only pristine thing was the long row of children’s books on the mantle, held together by a pair of elephant bookends.

When you are pregnant, it’s hard to believe sometimes that there’s a life inside of you. The books were the proof. I could so clearly see myself sitting on the edge of a single bed in the lamplight someday, reading “Mr. Popper’s Penguins” to my son, even if I couldn’t yet imagine his face.

J. Courtney Sullivan is the author of four novels, including, most recently, “Saints For All Occasions.”