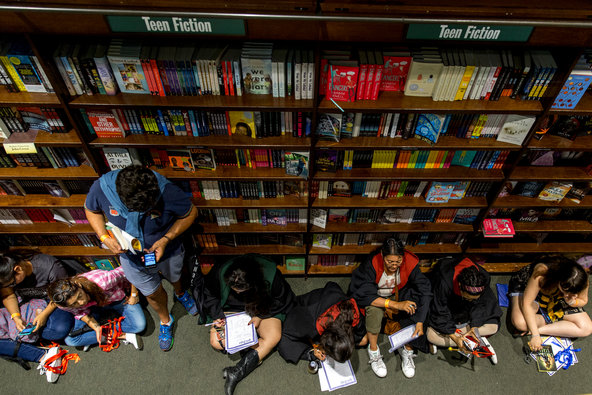 Harry Potter fans wait for the release for “Harry Potter and the Cursed Child.”Credit Yeong-Ung Yang for The New York Times

Our family is just home from the bookstore, with multiple copies of “Harry Potter and the Cursed Child” in hand, gamely reading in a new format — the book is the script of the play by the same name, and thus a different reading experience from the seven novels that came before it.

There will be no spoilers here, but the very title makes clear that “The Cursed Child” is a story about parents and children in a way that the original series never was. Harry Potter is a father now, and one question this book will answer is how the Boy Who Lived — when his parents didn’t — handles that role.

As an orphan, Harry himself could operate free of the burden a parent’s fears, love and expectation can place on a person. Now, as a parent, he has to confront it.

For readers who started reading these books when the first one came out nearly 20 years ago and grew up with Harry and friends, the scenes that reveal the characters as adults are the ones we’ve been waiting for. Though the story has serious themes, the sheer fun of returning to the familiar magical world is a delight.

And there are certainly moments when real-life parents can fantasize about the possibility of a magical assist. Imagine being able to use a spell like “Accio Binky!” to return a dropped pacifier to the sleeping baby, or “Expelliarmus Mobilio!” to expel a mobile phone right out of a teenager’s hand.

Molly Brennan, a mother of two attending a book release party on Saturday night at Watchung Booksellers in Montclair, N.J., suggested a spell called Behavioramus. “I would dodge it,” said her son, Logan Brown, 9. “I like my behavior how it is.”

Becky Middleton of Glen Ridge, N.J., who has four children ages 6, 9, 9 and 11, said her spell of choice would be volume control. Rob Fechner of Montclair, the father of two boys ages 7 and 10, asked for a spell “to pause time so I could get stuff done and take a nap.”

It’s giving nothing away to say that none of those abilities seem likely to make raising children any simpler for Harry, Ginny, Hermione and Ron. As Julia Miner, a mother of three who lives outside Washington, D.C., said Sunday, when she was up to page 70 of “The Cursed Child,” parenting teenagers has challenges no matter who you are. Magic has never helped much with relationships in the Harry Potter universe, and the fact that wizards face some of the same bitter limits that Muggles do has always been a part of the series’ appeal.

But for many parents and children in this universe, the books are conversation–starters that help connect us, engaging us in the same world. Now our conversations can go further.

In the comments or on Facebook, tell us what spell would help you most as a parent.