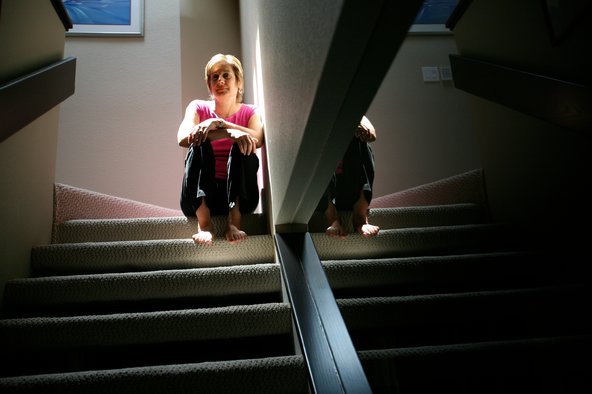 Donna Flowers, a former pro figure skater and physical therapist who works with elite athletes, was debilitated by chronic fatigue syndrome several times and was unable to work.Credit Heidi Schumann for The New York Times

A new study has identified a bacterial blueprint for chronic fatigue syndrome, offering further evidence that it is a physical disease with biological causes and not a psychological condition.

Chronic fatigue syndrome is a condition that causes extreme and lasting fatigue, preventing people from taking part in even the most routine daily activities. There are no tests to confirm the diagnosis, which has prompted speculation that it is a psychological condition rather than a physical illness.

In a study published in Microbiome, researchers recruited 48 people with C.F.S. and 39 healthy controls. Then they analyzed the quantity and variety of bacteria species in their stool. They also searched for markers of inflammation in their blood.

The stool samples of those with C.F.S. had significantly lower diversity of species compared with the healthy people — a finding typical of inflammatory bowel disease as well.

The scientists also discovered that people with C.F.S. had higher blood levels of lipopolysaccharides, inflammatory molecules that may indicate that bacteria have moved from the gut into the bloodstream, where they can produce various symptoms of disease.

Using these criteria, the researchers were able to accurately identify more than 83 percent of C.F.S. cases based on the diversity of their gut bacteria and lipopolysaccharides in their blood.

Finding a biomarker for C.F.S. has been an ongoing goal for researchers who hope to one day develop a diagnostic test for the condition. Still, the senior author of the study, Maureen R. Hanson, a professor of molecular biology at Cornell, said the bacteria blueprint in the new study is not yet a method of definitively diagnosing C.F.S. The importance of the finding, she said, is that it may offer new clues as to why people have these symptoms.

“There’s a biological difference between people with C.F.S. and healthy people,” she said. “The long-lasting idea that it’s a psychological illness should be abandoned.”