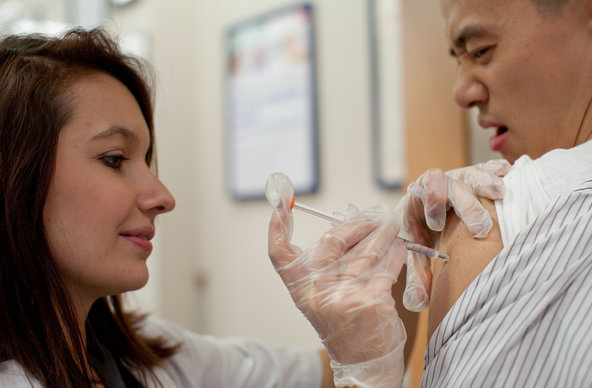 There may be a simple and cost-free way to improve the effectiveness of the flu vaccine: Get vaccinated in the morning instead of the afternoon.

British researchers randomized 276 men and women over 65 to get their flu shot either from 9 to 11 in the morning or 3 to 5 in the afternoon. The participants filled out questionnaires to assess health behaviors and socioeconomic status, gave a blood sample, and were given the standard trivalent flu vaccine. The study is in the journal Vaccine.

A month later they returned to give another blood sample. The researchers then compared anti-influenza antibodies in the two samples to measure the effect.

After controlling for differences in income, smoking, alcohol consumption, sleep duration and other health and behavioral characteristics, they found that for two of the three influenza strains contained in the vaccine, the response was significantly stronger in those vaccinated in the morning. For the third strain, morning or afternoon vaccination made no difference.

The study’s senior author, Anna C. Phillips, a professor of behavioral medicine at the University of Birmingham, said the reason for the effect is unclear, but she urged people to get the flu shot in the morning.

“This is risk-free,” she said, “and really doesn’t inconvenience anyone. It’s something people can start doing now while we wait for further explanation.”