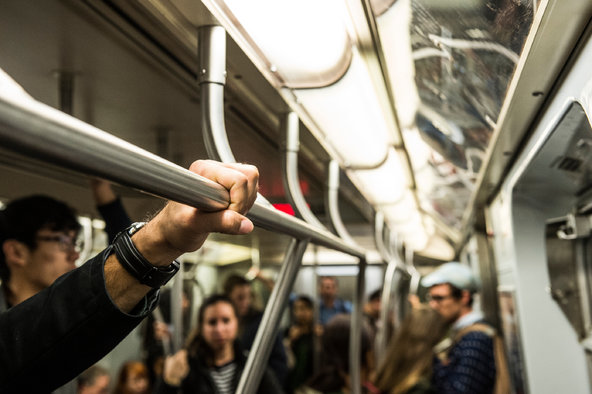 Those subway poles you avoid touching because you’re convinced they are covered with harmful germs may not be as dangerous as you thought.

With the cooperation of the Massachusetts Bay Transit Authority, researchers at Harvard swabbed seats, walls, poles, hand grips and ticket machines in the Boston transit system, and then did DNA analyses to figure out what kinds of organisms they had collected. The study is online in mSystems.

All the surfaces were contaminated with generally innocuous human skin bacteria, including various strains of propionibacterium, corynebacterium, staphylococcus and streptococcus, among others. Some strains of these bacteria can cause disease under certain circumstances, but all are carried by healthy people and usually cause no problems.

Unsurprisingly, oral germs were found on poles at mouth level, and microbes that infest the skin on hand grips. Outdoor ticket machines had microbes that are prevalent in soil and the air.

“We were specifically checking for bad bugs or the kind of DNA that can make good bugs go bad,” said the lead author of the study, Curtis Huttenhower, an associate professor at the Harvard T.H. Chan School of Public Health. “But even though we think of it as dirty, the transit system has only the kind of microbes you run into shaking people’s hands.”