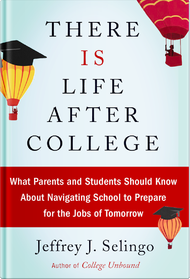 Not every child who gets into college is ready to go. For some, taking a “gap year” — deferring admission for a year after high school graduation — may prove invaluable, helping a child thrive in college and after graduation as well. That’s among the messages in Jeffrey J. Selingo’s newest book, “There Is Life After College: What Parents and Students Should Know About Navigating School to Prepare for the Jobs of Tomorrow.”

Many colleges now endorse the gap year, including Harvard, which “encourages admitted students to defer enrollment for one year to travel, pursue a special project or activity, work or spend time in another meaningful way.” Students who take time off tend to do better academically and are more likely to be satisfied with their choices after graduation, and we’ve written about how students who take time off may be able to make better choices about things like alcohol and sex and have a better understanding of what they want from college. As Lisa Damour, who writes a column on adolescents for Well Family, puts it, “teenage years are like dog years: a year of maturation at age 18 is worth at least seven in later life.”

But parents often remain dubious about the gap year, worried that their student, once off education’s main highway, will never attend college at all. High school guidance counselors, who may be judged by the number of seniors who attend college rather than the number who graduate, don’t always support the idea, either. And funding a gap year can feel like a barrier for many families — some programs can cost the equivalent of a year’s tuition. Those that don’t can be as challenging to get into as college itself. City Year, for example, which receives funding from AmeriCorps and which pays students to tutor in schools around the country, selects 2,700 students from among 13,000 applicants.

Mr. Selingo, a professor at the University of Arizona and a former top editor at the Chronicle of Higher Education, says parents should let go of their fears. In his book, he explores what happens to our children after they graduate from college – and why it doesn’t look much like the journey we ourselves took a generation or so ago. A lot has changed, he says, and those changes make a gap year more valuable than ever.

“It used to be that if you could get into college and graduate, you were essentially golden,” Mr. Selingo said. Once a child was admitted to college, “parents could breathe a giant sigh of relief and essentially say, as long as you graduate, you’re O.K.”

That’s no longer true, he says. “College has changed. Recruiting has changed. The economy has changed.” Some students may sprint straight toward traditional success, while others wander along the way or appear to straggle behind. For parents of adult children in those last groups, helping them to find the time and space to mature into the life they want is critical. A gap year is one of the many options he describes for helping students form their own understanding of why they’re going to college, and what they want once they get there.

“We shouldn’t rush this transition,” Mr. Selingo said. “We are rushing too many kids off to college who aren’t ready or don’t know why they’re there.”

It’s important, Mr. Selingo noted, that the gap year itself be meaningful. “Students who delay college to work odd jobs for a while to try to ‘find themselves’ don’t do as well as everyone else when they get to college,” he writes. “They get lower grades, and there’s a greater chance they will drop out.” A gap year needs to provide either “meaningful work experience, academic preparation for college, or travel that opens up the horizon to the rest of the world.” It’s also important that a student has a plan for closing the gap — Mr. Selingo, like many others, recommends that students apply for and accept a place in college before starting a gap year.

To increase their investment in the gap year experience, some students can find meaningful work experience, perhaps working as a nanny or as a language instructor overseas. Others might work those odd jobs with the goal of funding, or partially funding, a paid gap experience. Even if parents end up footing all or most of the bill, though, Mr. Selingo argues that it’s worth it. At most public universities, fewer than 20 percent of students graduate in four years. Many students take six years to finish a degree, or never finish at all. An investment in a gap year, he writes, “might be money saved later if students are more directed when they eventually go to college.”

Above all, parents and students should think of a gap year not as a break in an education, but as a part of it. “We need to remember that lifelong education is no longer rhetoric, but reality,” said Mr. Selingo. “We still think of an education as this thing you get, at this one place, once in your life,” he said. “That’s not the way it works anymore.”