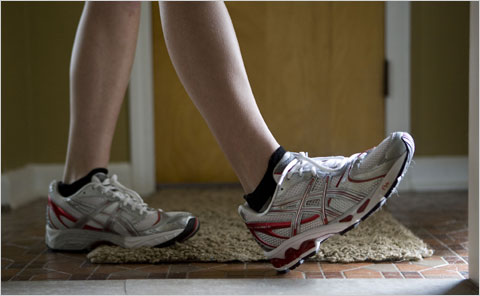 Jeffrey Sauger for The New York Times The first step is getting off the couch.

Yesterday I wrote about my plans to get off the couch and onto the New York City Marathon course during the next five months, but my goal was met with a chorus of skepticism.

“I went from couch potato to ‘marathon runner’ and it was a bad, bad idea,” wrote reader jelodi97. “I was in no way ready for the physical and mental stresses of a full marathon.”

“Is it really wise to encourage people with no recent running experience to ‘get back in shape’ by training for a full marathon?” asked reader Cy. “This strikes me as the kind of all-or-nothing attitude towards fitness that tends to derail so many casual athletes’ exercise habits.”

I have to admit, I panicked a bit after reading all the comments about injuries. For fortification, I called Jeff Galloway, an Olympian and marathoner who, over the years, has helped about 250,000 runners train for a marathon. Was I crazy to think I could go from sedentary to marathon-ready by fall? Am I destined for injury?

“This is a common perception,” he told me. “A lot of people have tried a lot of the conventional programs, including ones I used originally in the ’60s and ’70s, and got injured as a result.”

But Jeff reassured me that it really is possible for a beginner to complete a marathon without getting hurt. The key to injury prevention is to start slow and continue to take frequent walk breaks during the weeks of training and the marathon itself.

Give yourself a day’s rest after every run. And later in the program, when you’re completing longer training “runs” on the weekends, you will still follow a comfortable run-walk pattern. And if you have to walk most of it, that’s fine too. While the strategy is essential for beginners, even experienced runners can prevent injury by incorporating walk breaks into the workout.

In early June, Run Well will offer readers several marathon training plans, including three 20-week Galloway plans tailored to your fitness level. While running advice varies, other running guides, such as the Couch-to-5K running plan and the Hal Higdon plan, also suggest a gradual approach and walk-breaks for beginners. Often, the hardest part is holding yourself back. Don’t be tempted to push yourself or overdo it at the beginning, because that’s how injuries happen, says Jeff.

Jeff says he recently ran a marathon with a group using one-minute walk-run intervals, and everyone finished in less than five hours. But who knows? Depending on my training, it may take me longer. The fact is, I don’t care. My goal is to avoid training injuries, complete the course, soak up the atmosphere and enjoy the day.