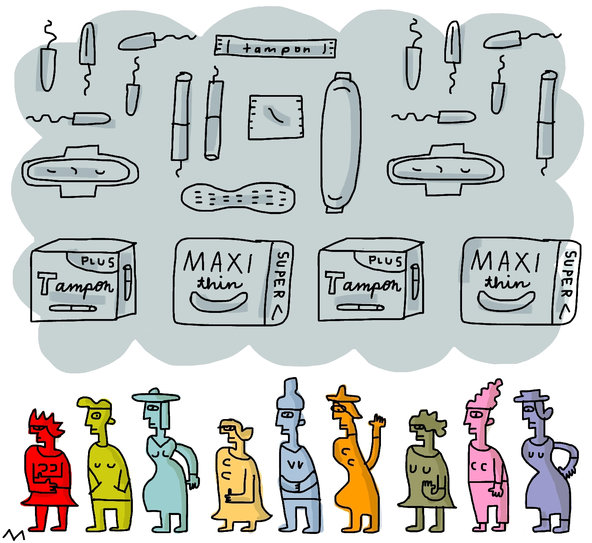 Call it the period paradox. Everyone knows most girls and women menstruate, but even in the age of oversharing, periods are treated like a dirty little secret.

Now a growing number of advocates, entrepreneurs and female lawmakers are challenging the taboo, talking about menstruation publicly (and, yes, in mixed company). They want periods put squarely on the public agenda, and are demanding that businesses and government take menstruation into consideration when they design facilities, develop budgets, supply schools or create anti-poverty programs. And they want tampons in every public restroom. And they want them to be free.

For those who are squeamish about all this, the message is: Get used to it.

“I think many people, men and women, are probably a little uncomfortable thinking or talking about menstruation,” said Representative Grace Meng, Democrat of New York. “We’re thinking of how we can change the conversation.”

Earlier this year, Ms. Meng noticed that the Federal Emergency Management Agency did not allow homeless assistance funds to be used for feminine hygiene products, even though they covered soap, diapers, toothpaste and underwear. She appealed to the secretary of Homeland Security, Jeh Johnson, who oversees the agency. FEMA’s administrator, W. Craig Fugate, wrote back saying the items would be added to the list of allowable purchases. The new policy will be written in new manuals coming out in April, Ms. Meng said.

“Menstruation is something women cannot control,” said Ms. Meng, adding that she has heard reports of homeless women who use rags or soil their clothes because they don’t have access to appropriate hygiene products. “Menstrual products should not be treated as luxury items.”

In New York City, Councilwoman Julissa Ferreras-Copeland has initiated a pilot project to install a free tampon-dispensing machine in the girls’ restroom at the High School for Arts and Business in Corona, Queens, with the goal of eventually having free machines in all of the city’s middle schools and high schools. The machines and sanitary supplies are being donated by Hospeco, a Cleveland-based personal care products supplier.

Other initiatives are emerging around the country. In Wisconsin, legislators have introduced a bill that would make free sanitary products available in restrooms in all public state buildings, including schools.

In Columbus, Ohio, Councilwoman Elizabeth Brown wants restrooms at the city’s recreation centers and community swimming pools similarly supplied, as well as the public schools. “Girls who get their period shouldn’t have to go to the nurse’s office,” Ms. Brown said. “The underlying message with that is, ‘something’s wrong with me.’ Certainly we can all agree that having your period is not a monthly illness.”

At George School, a private school in Newtown, Pa., Vienna Vernose, a senior, was upset after a boy reacted by saying “ew” when a tampon fell from her backpack. She talked about it with male and female classmates in her Women’s History Seminar, who decided to form the Menstrual Product Equality campaign, setting out bowls filled with tampons in public areas during the school’s open house. Signs next to the bowls read, “These are here for anyone who needs them. Never be ashamed of your body and what it needs.”

“Tampons and pads should be treated just like toilet paper — they’re the equivalent,” said Nancy Kramer, an entrepreneur from Columbus, Ohio, who started Free the Tampons, a campaign to make feminine products accessible in all restrooms. She said the cost of stocking restrooms at a school or business with sanitary supplies works out to $4.67 per girl per year. “Menstruation is a normal bodily function, and it should be treated like that.”

While most states exempt nonluxury items like groceries and prescription drugs from sales taxes because they are considered necessities, critics note that the vast majority of states still tax sanitary products. So far, some 55,000 people have signed the online petition started by Cosmopolitan magazine, urging these taxes be lifted.

“Basically we are being taxed for being women,” said Cristina Garcia, a California legislator. Linda B. Rosenthal, a New York State assemblywoman, called the taxes “a regressive tax on women and their bodies.” Notably, items that are not subject to the tax include condoms and sunscreen.

Ms. Meng has introduced federal legislation that would allow women to buy feminine hygiene products with flexible spending account funds, which can be used to cover certain medical and dental costs, prescription drugs, prescription eyeglasses and items like bandages — but not sanitary pads or tampons.

For women to publicly demand menstrual supplies as a basic right is a sea change in thinking, said Chris Bobel, president of the Society for Menstrual Cycle Research and an associate professor of women’s and gender studies at the University of Massachusetts, Boston. “The message to women has been: ‘Menstruation is your problem, ladies,’” she said. “‘Your job is to render it invisible.’”

Jennifer Weiss-Wolf, a writer and lawyer from Maplewood, N.J., who is involved in the push for lifting taxes and providing supplies in public restrooms and schools, said her ‘Aha’ moment came when young women in her town launched a tampon collection drive for the local food pantry, as part of a group called Girls Helping Girls. Period.

A medium-size package of sanitary products can cost between $7 and $10, plus tax, and a woman could use one package per cycle— making them a significant expense for poor women and girls. Yet food pantries do not receive a regular donated supply of sanitary pads, said Margarette Purvis, president and chief executive of Food Bank for New York City. She said her organization receives the products sporadically, usually when a retailer has torn packages that cannot be sold.

“It’s something the state should maybe take into consideration for those of us who are really struggling, even though it’s probably the last thing on their minds,” said Lakeisha Adams, a 39-year-old Queens mother of four who relies on public assistance, and says she has had to borrow money from relatives to buy menstrual products.

“I grew up with five brothers, so I know it’s something a lot of men just don’t want to hear about,” said Ms. Adams. “But it’s one of the most important things for a woman to have available.”

Indeed, many men will go to great lengths to avoid the subject, said Ms. Kramer, the organizer of the Free the Tampons campaign.

“They stick their fingers in their ears, ‘la-la-la, don’t talk to me about it,’ until I say, ‘Do you have a daughter? Then you need to listen to this.’”