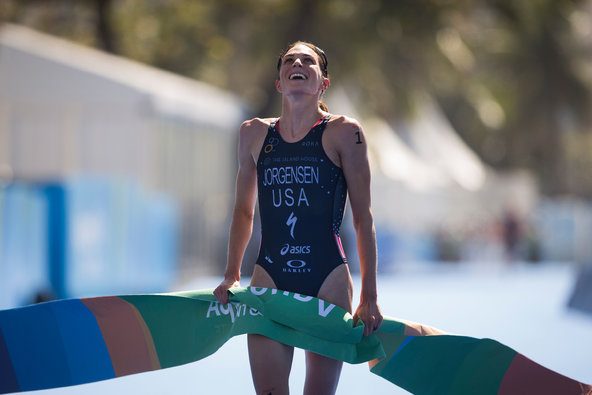 When the Olympic triathlete Gwen Jorgensen was competing in London four years ago, an unexpected flat tire at mile 13 rattled her to the core. Her hands were shaking as she rushed over to the mechanical pit, and it took her a moment to calm down and explain the situation before getting the repair and jumping back in the race. A medal contender at the start, she settled for a devastating 38th-place finish.

Immediately after the disappointing result, Ms. Jorgensen, a one-time Ernst & Young tax accountant, realized that she had allowed an unfortunate but manageable mechanical problem to become psychologically devastating. She knew she needed to change her approach to training and focus on both her mind and body to succeed in the taxing sport, which includes swimming nearly a mile, cycling about 24.9 miles and and running 6.2 miles.

Ms. Jorgensen headed to Wollongong, Australia, to work with a new elite team and coach, Jamie Turner, who helped develop a series of techniques to better mentally prepare her for the event. Along with four daily workouts, Ms. Jorgensen started a series of perceptual exercises to help reduce the stress of elite competition and to build her confidence. 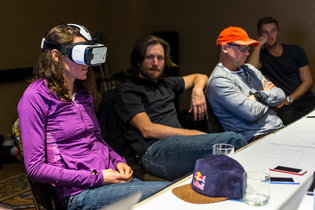 Gwen Jorgensen uses a virtual reality viewer to familiarize herself with the turns on triathlon courses.Credit

The Wisconsin native now takes time to envision her various races: the tricky corners, the steep inclines, a competitor’s moves, the bike handling and making an attack. Even though it is all happening only in her mind, her goal is to feel as if she has completed the course several times before before stepping to the starting line at Copacabana Beach.

Every day, she also writes down three things that she did well in training, and three areas where she wants to improve. It may seem like a meaningless exercise, but the daily reinforcement began to make a difference.

“If I feel like I need more confidence,” added Ms. Jorgensen, “I look back at those things I did well to help.”

Ms. Jorgensen also now practices mindfulness techniques to use during an actual event. She learned to concentrate on physical sensations — feet on the pedal, pushing the water, pounding the pavement – to eliminate mental distractions. “I cannot control what other athletes are doing, but I can control what I am doing,” she said. “I focus on my process-based goals: a high elbow in the swim, looking through the corners on the bike, relaxing my shoulders on the run.”

Post-race there is a different set of cerebral drills. Immediately after the competition, she sits down and writes a race report and jots down what she was thinking as she competed. She and her coach analyze the results, “to see if we’re heading in the right direction and what changes we can make to improve.”

To help her keep her mind clear and focused on training and competition, Ms. Jorgensen’s husband, the former pro cyclist Patrick Lemieux, has taken on household tasks such as shopping, cooking and cleaning and even helps with the cleaning of her bike. He does “all of the little things so all that I have to focus on is training and resting,” she said. “It relieves the pressure on me.”

The approach worked. Within a month of implementing her new regimen of mental training, Ms. Jorgensen placed second at the International Triathlon Union World Triathlon Grand Final in Auckland, New Zealand in October 2012. She later went on to become the first American woman to win an ITU World Triathlon Series race in 2013 and had an unprecedented 13-win streak in her 2014-15 season.

She’s now among the favorites to win Olympic gold.

To further boost her mental game in Rio, she added a new practice to boost her confidence: virtual reality. With support from one of her sponsors, Red Bull, her team worked with the virtual reality producer Joseph Chen to create a virtual bike course winding through Rio. 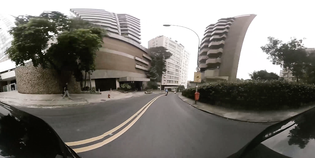 A screen grab from Gwen Jorgensen’s virtual reality training for the Olympic triathlon.Credit

“We focused on the bike course at the 2016 Games because it’s one of the aspects that Gwen mentioned that she wanted to work on,” Mr. Chen said. “It’s probably the most technical, so we wanted to familiarize her with course, to the point where she doesn’t have to second-guess which corner is coming up next. Basically it’s home field advantage.”

To create the immersive virtual reality imagery, Mr. Chen and his team took a trip to Rio where they mounted a 360-degree camera rig to the hood of an S.U.V. They placed the camera at the same height as her eye line on the bike, made adjustments to mimic her body position, and drove the circuit several times. The result was a 10-minute-long video (along with 30-second sectors focused on specific areas) that allowed Ms. Jorgensen to see the course as if she were riding it herself.

It was apparent to Mr. Chen that Ms. Jorgensen immediately began developing a race strategy when she first tested out the virtual reality eyewear. “She told us, ‘I’m able to look through the corners. I’m able to feel like I’m there. I’m starting to think about what the different ways are to take these corners in different situations.’ It was elevating her mental race.”

Virtual reality is a powerful visualization tool for athletes, the clinical sports psychologist William Wiener said, because it helps them anticipate their emotions on race day. “Mental training is as important, if not more, than the physical training,” he noted. “Anticipating how you’ll feel prior to the event gives you a certain ability to respond in the moment that you wouldn’t otherwise have; you’re desensitizing yourself to the stress of the real life event.”

While other sports like IndyCar and Formula One racing use full-motion racing simulators, Ms. Jorgensen’s V.R. experience does not include an actual bike.

“The technology still isn’t there to simulate the degree of fidelity for her sport, so we wouldn’t want to compromise any of her physical training with a mismatch,” Mr. Chen said. “The system is basically used to get some of those pre-race jitters out of her system and making her less reactive and more proactive.”

She places the virtual reality viewer over her eyes and begins the Rio bike course without ever leaving her chair. As she zooms through the course, she imagines herself hugging the corners of every turn, gripping the handlebars tighter over each bump and feeling her heart pumping faster on an uphill of the bike course.

“It’s easy for an athlete to say they want to win a race; it’s a lot more difficult to identify the actual process needed to achieve that result,” Ms. Jorgensen said. “I believe the last four years have given me some valuable insight and knowledge that will reduce some of my pre-race nerves as I head into Rio. That mind shift has been vital.”