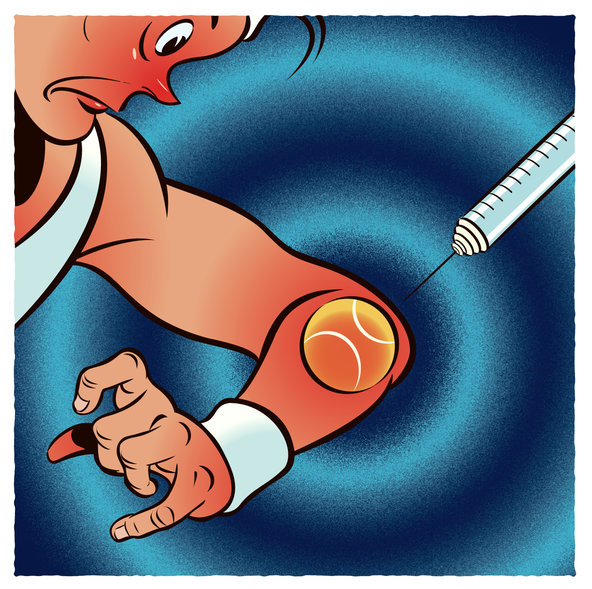 Tennis elbow is not exclusive to tennis players; anyone who frequently twists an arm or carries a heavy briefcase can develop it. But whoever they may be, sufferers of the condition in the past 10 years have generally been offered a cortisone shot as treatment. Recent surveys in the United States and Britain show that injections of the steroid, which rapidly dulls pain and fights inflammation, are the preferred first line of treatment among many orthopedic specialists. But growing evidence suggests that the injections, while effective in the short term, can frequently worsen the condition in the months that follow, raising interesting questions about the risks of quick fixes for pain.

For decades, tennis elbow was thought to be caused by inflammation in the tissues around the joint. Newer science, however, including biopsies of the sore tissues, shows little inflammation, except in the very early stages of the injury. Instead, it is thought to involve degeneration of the tissues: If the joint is used repeatedly and strenuously, the body cannot repair any resulting minor damage before more damage occurs, and the tendons that hold the elbow together begin to fray and buckle. The pain can be debilitating and last for months.

As a treatment, cortisone shots are appealing because they are easy to obtain; any general practitioner can administer them. But the most sophisticated study to date of tennis-elbow treatments finds that cortisone seems to be counterproductive.

In the study, published last summer in BMC Musculoskeletal Disorders, 177 people who had just developed tennis elbow randomly received two cortisone shots three weeks apart or a placebo injection on the same time schedule. Both groups also got elbow massages and began a six-week series of at-home arm stretches and exercises. A third group was not treated at all, to serve as a control.

The volunteers’ elbow function and pain were tested periodically until they were a year out from treatment. At the first check-in at six weeks, the men and women who had received cortisone reported much less pain than those in the placebo and control groups, both of which, on average, reported elbow soreness that was only slightly lower than at the start. But in another six weeks, the cortisone-treated elbows were as sore as those of everyone else. And six months after treatment, those who had received cortisone had significantly more elbow pain than the other groups.

Why cortisone might have worsened people’s tennis elbow remains uncertain, says Dr. Morten Olaussen, a family-medicine physician and researcher at the University of Oslo in Norway who is a co-author of the new study. But it is plausible that the drug could impede structural healing within the joint.

The good news is that after a year, almost everyone’s elbow recovered, whatever their treatment or lack of it. In fact, the control group had the same success rate — close to 80 percent — after a year as all other participants. These results suggest that despite many of our instincts to do something — anything — when we hurt, the cheapest and most efficacious treatment for tennis elbow could turn out to be time.