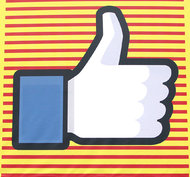 Move over sex, drugs and rock ‘n’ roll. For today’s teenager, it’s all about the “likes.”

A “like,” for the uninitiated, refers to the positive feedback given to a post on social media. And new research shows that likes appear to be somewhat intoxicating to teenagers. The same reward center in the brain that is involved in the sensation of pleasure and activated by thoughts of sex, money or ice cream also is turned on when teenagers see their photos getting a lot of likes on social media.

To learn more about what drives social media use among teenagers, researchers at the University of California, Los Angeles, conducted a novel experiment in which they recreated a photo-sharing social network similar to Instagram. The paper was published in the journal Psychological Science.

To do the study, the researchers recruited 32 people ages 13 to 18 and told them they were participating in a small social network modeled after Instagram, where friends or followers can endorse an image or video by clicking on a heart-shape icon.

In the experiment, researchers asked the teenagers to contribute some of their own photos, and then had them come in to the lab to look at nearly 150 images – including fairly bland photos, images of risky behavior and some of the teens’ own photos – while scientists analyzed their brain activity with functional magnetic resonance imaging.

When the youngsters viewed images that had a lot of likes, there was greater activity in neural regions of the brain involved with reward processing, social cognition, imitation and attention, researchers said, compared with neural reactions when the teens looked at photos with fewer likes.

The effect was magnified when they saw an image they themselves had contributed which had received a large number of likes, researchers said.

Teenagers were more likely to give a like to an image that had already gotten dozens of likes, even if it was a fairly banal picture of a plate of food or a pair of sunglasses. They were less apt to like the same kind of image if it had gotten few likes.

While the experiment focused on only a small group, it seemed to capture peer pressure in real time. But peer pressure is not always a bad thing, said the paper’s lead author, Lauren Sherman, and may play a critical role in teens’ accrual of social and cultural knowledge that’s essential to their development.

“Conformity is part of adolescence, and some of it is normal,” said Ms. Sherman, who prefers the term “peer influence” to “peer pressure.” “It’s how teenagers learn the rules of how to communicate and how to develop relationships.”

When the adolescents viewed images suggesting risky behavior (such as a bag of marijuana or pack of cigarettes), they were still influenced by their peers’ likes, but to a lesser extent, Ms. Sherman said. The researchers also did not see the same activation of the brain reward center, although they don’t know why. Teenagers viewing risky photos also exhibited decreased activity in brain regions involved in cognitive control and response inhibition, the regions that Ms. Sherman described as those that “put the brakes on, that tell us to be careful.”

Kate Mills, a postdoctoral fellow in developmental cognitive neuroscience at the University of Oregon, agreed. “Peer pressure gets bad press when peers are influential in a negative direction, but peers can also be influential in a good way,” Dr. Mills said. “The wonderful thing about our reward circuitry is that it’s not just involved with things we think of as hedonistically pleasurable. This is a circuitry that’s involved in learning about the environment.”

The likes are “potentially serving as a social cue, orienting them to what is cool or socially appropriate,” Ms. Sherman said. “Learning about the social world is a really important task of adolescence.”