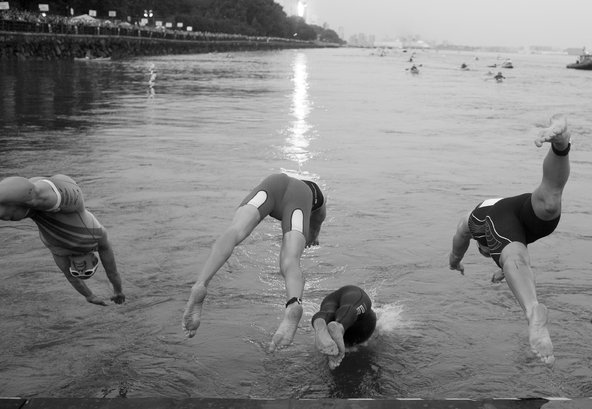 Triathletes plunged into the Hudson River for the 12th annual N.Y.C. Triathlon held in 2012.Credit Christopher Gregory for The New York Times

Strategically skipping bread, pasta and other carbohydrates at dinner might improve subsequent athletic performance, provided those low-carb meals are combined with the right types of workouts, according to a new sports nutrition study. Its findings undercut some entrenched ideas about how athletes should eat in preparation for spring marathons and other endurance races.

As those of us who are athletes or spend time around them know, diets are a topic of consuming interest for the group, since an athlete’s diet affects how well he or she can train, recover, progress, chisel a physique and compete.

But the ideal sports diet remains elusive. Many dietitians and coaches advocate for heaps of carbohydrates at the training table. Carbohydrates, which break down during digestion into sugar, are the body’s first choice as fuel during exercise. But the body’s reservoir of stored carbohydrates is small, and even if athletes supplement their supply during exercise with sugary drinks or food, prolonged or intense exertion generally incinerates much of the body’s available carbohydrates.

Consequently, some experts suggest that athletic success may depend in part on making the body better able to use fat as a fuel. Even the leanest athlete’s body is girded with the stuff, theoretically providing enough energy for even the longest, hardest workouts. Low-carbohydrate diets will force the body to turn to fat. But working muscles must become used to burning fat, a process that can make exercising on a low-carb diet difficult in the short term. Indeed, athletes on extremely low-carbohydrate diets tend to struggle to finish hard workouts.

So researchers at the French National Institute of Sport, Expertise and Performance in Paris and other institutions began to wonder about the possibilities of modified forms of low-carb diets, and specifically about what they and other scientists call “sleeping low.”

With a “sleep-low” sports diet, an athlete skips carbohydrates at dinner. In the morning, his or her body should have low reserves of the macronutrient, and any ensuing workouts would force the body to turn to fat, its most abundant fuel. In past studies of the technique, however, it has produced mixed results in terms of whether it improves competitive performance.

The authors of the new study, which was published in January in Medicine & Science in Sports & Exercise, suspected that the sleep-low diet needed to be integrated into a broader training plan in order to show desirable results.

To test that possibility, they recruited 21 experienced, competitive triathletes who bravely agreed to have their diets manipulated. The scientists ran their volunteers through a simulated triathlon and other tests of their current fitness and pace.

Half of the athletes were then randomly assigned to eat a standard sports diet, with large helpings of carbohydrates at every meal and after workouts.

The others were put on a sleep-low regimen. With this program, the athletes consumed the same amount of carbohydrates over the course of the day as the other group, but in a different sequence. Virtually all of their carbohydrates were consumed at breakfast and lunch, with none at dinner.

At the same time, all of the athletes also began a new training program. In the afternoon, both groups completed a draining, intense interval-training session, designed to increase fitness and deplete the body’s carbohydrate stores. The members of the control group then replenished their carbohydrates at dinner; the sleep-low group did not.

Next morning, before breakfast, the volunteers pedaled for an hour at a moderate pace on stationary bicycles. By this time, the sleep-low group was running on carbohydrate fumes and body fat.

Afterward, all of the athletes sat down to large, carb-rich breakfasts and lunches, meaning that both groups were flush with carbohydrates for the afternoon interval training.

This program continued for four days per week for three weeks. (On the remaining days, the athletes ran, cycled or swam at an easy pace and ate as they chose.)

After three weeks, the athletes in the sleep-low group were grumbling about evening hunger.

But when the researchers now repeated the simulated triathlon, those athletes in the sleep-low group showed notable improvement. Their times on the 10-kilometer running leg at the end of the race were faster by about 75 seconds, or 3 percent, than at the start of the study. The control group had not improved.

The sleep-low volunteers also had lost body fat, while the other athletes had not.

These findings suggest, said Laurie-Anne Marquet, a graduate student at the French National Institute of Sport who led the study, that exercising strenuously in the afternoon, depriving yourself of carbohydrates afterward, training gently the next morning and then swallowing a mound of pancakes might be a useful way to improve endurance and performance. The regimen seemed to have increased the athletes’ ability to access fat as muscle fuel, she said, allowing them to exercise harder during the workouts than the control group and gain additional fitness and speed.

Such a rigorous routine is not for everyone, of course. Those of us not training for a marathon, triathlon or similar event probably would not enjoy or benefit from sleeping low. Even serious athletes should thread the approach into their training cautiously, Ms. Marquet said, beginning a few weeks before a race and easing off in the days just before the event, when they should down carbohydrates at will.

Encouragingly for those tempted by the diet, though, “most of the athletes” in the study, Ms. Marquet said, “have now integrated this strategy into their training.”