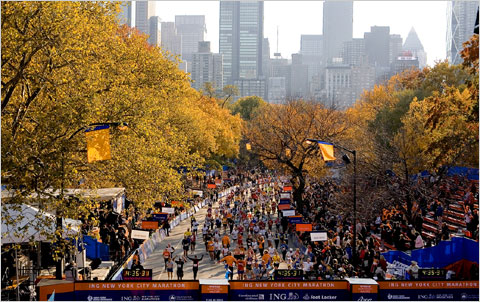 Whether you want to run up a mountain, through scenic fall foliage or in the steps of Olympic champions, there’s a marathon for you.

The first step toward running a marathon is to choose your race. And the time is now. To run a marathon, most people need to train for about 20 weeks, and many fall marathons have spring deadlines for signing up. If you want to run the New York City Marathon, the largest marathon that attracts the best athletes from around the world, the deadline to enter the race lottery is June 1.

Some people like to run “destination” marathons, making a race in Beijing, Dublin, Berlin or Honolulu part of their vacation plan. Some people look for flat races — like the Chicago or Mohawk-Hudson River — that are less grueling for a new runner or will help an experienced runner achieve a personal best. For others, it’s all about atmosphere — whether it’s the panoramic views of the Pacific Coast at the Big Sur Trail Marathon or the festive atmosphere of the San Antonio marathon, which treats runners to live music at every mile.

A great resource for all things marathon is the Web site MarathonGuide.com. You’ll find an exhaustive list of marathons around the world, the latest marathon news and pace charts and calculators to help you train for race day. Meanwhile, check out our list of some major marathon events in the last half of the year.

July 26: San Francisco Marathon: Your chance to run across the Golden Gate Bridge.

August 16: Pikes Peak Marathon: The second half of the race is downhill.

Sept. 19: United States Air Force Marathon: Head to Dayton, Ohio to check out the RQ-4 Global Hawk unmanned aircraft and wear an aviation-themed medal once you cross the finish line.

Sept. 20: Berlin Marathon: More than 40,000 athletes set off on the fastest marathon course in the world, cheered on by a million spectators and more than 70 live bands.

Sept. 20: Yonkers Marathon: One of the nation’s oldest marathons, this tough course was one part of the Olympic trials.

Oct. 4: Twin Cities Marathon: Organizers have trademarked the slogan “The most beautiful urban marathon in America.’’

Oct. 4: Portland Marathon: Runners are treated to panoramic views of the Oregon city and a run across the St. Johns Bridge, said to be one of the most beautiful suspension bridges in the world.

Oct. 11: Mohawk-Hudson River Marathon: Flat, fast and scenic with just 800 runners to ensure fast times for all in this Albany, NY event.

Oct. 11: Chicago Marathon: If you’re aiming for a personal best, this flat, fast course is for you.

Oct. 18: Amsterdam Marathon: Your chance to finish the marathon in an Olympic stadium.

Oct. 18: Beijing Marathon: Starts in Tiananmen Square and combines views of both the ancient city and modern sites of the last Olympic games.

Oct. 25: Niagara Falls International Marathon: Starts in the U.S., finishes in Canada at the Falls.

Oct 25: Marine Corps Marathon: The 4th largest U.S. Marathon and largest marathon in the world that doesn’t offer prize money, which is why it’s often called “The People’s Marathon.”

Nov. 22: Philadelphia Marathon: A fast course through the neighborhoods and sites of one of the country’s most historic cities.

Dec. 4: Santa Barbara International Marathon: The course begins amidst lush lemon and avocado orchards and finishes with a “stunning” two-mile descent to the sparkling Pacific Ocean.

And be sure to check out the comments below, where readers have added their own recommendations for great fall marathons not on this list.