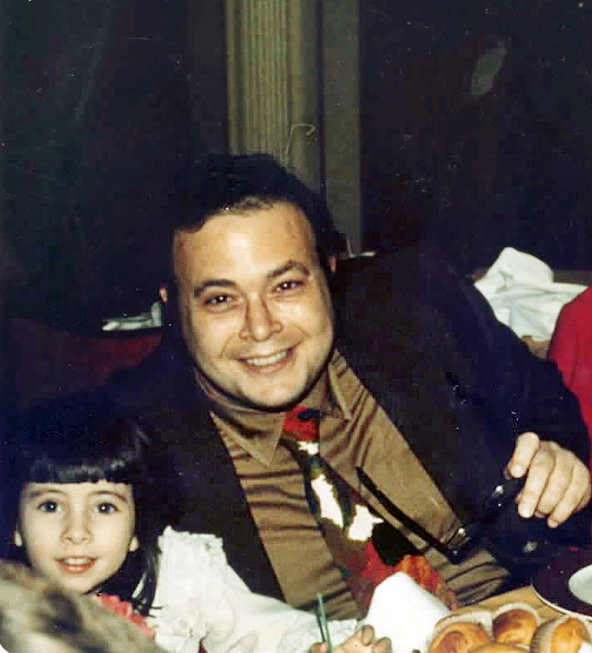 Dawn Lerman and her dad at her bubbe’s house in 1970.Credit 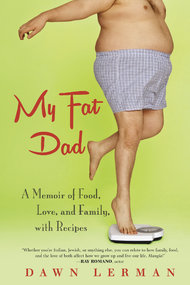 “Eat your soup. It’s good food,” my dad would playfully tell me, as he reminisced over the wonderful Jewish dinners his mom used to cook for him when he was a boy.

“Your Bubbe loved to fatten me up even when the doctors would shame her for how obese I was,” he said. “But Bubbe was proud that her job as a fluffer in the garment district could provide me with such extravagance. Every dairy meal had butter, milk and cheese, and Bubbe made sure there was plenty for seconds and thirds.”

I giggled remembering some of the holiday meals at Bubbe’s, and how I hardly had a chance to swallow one thing before my plate was filled again.

“Just a little more,” she always encouraged. “Food is meant to be eaten, not wasted,” she’d say, squeezing my cheeks until they were bright red and stung with pain. “Think of all the hungry children in the world.”

With each bite I took, Bubbe would profess her love. “Shayna maideleh! Beautiful girl! Who loves you the most in the world?” she would say, as she checked that I polished off every last crumb on my plate.

But other than holidays, we did not visit Bubbe much. My dad was a rising star in the ad industry — he was an international creative director at the ad agency McCann Erickson, but Bubbe was confused about what he did for a living and was disappointed that he did not have a regular job like his brother Melvin, who was an accountant. Even before I knew what an accountant was, I knew my dad’s job was super-fun as he got to work with Tony the Tiger and the Pillsbury Doughboy. But Bubbe was never impressed: “A Jewish boy should be a doctor or a lawyer!”

My dad felt that if they were not talking about food, the room was silent, so he made jokes — most of which Bubbe did not understand — to break the silence. Even when my dad was a child, he did things that she did not understand, like creating satirical comic books, or questioning why they had two different sets of dishes, or turning the lights on and off on Shabbat when she strictly forbid it.

As my dad showed me how to slice the mushrooms for the soup, he talked about his new account: Campbell’s. The current campaign, “M’m! M’m! Good!” was no longer generating enough sales, and it was my dad’s job to help create a slogan that would sell more soup.

While we stirred in the barley and shredded the meat for the broth, my dad shared the story of how when he was in the sixth grade, he got beaten up by a bunch of bullies who jumped him from behind, hitting him with lead pipes until he was unconscious.

“Fat mama’s boy! Fat mama’s boy!” they taunted. The beating was so bad that he spent a week in a coma, and the doctors didn’t know if he would live or die.

Helpless, my bubbe cooked all day and all night, praying for his recovery. She hoped the smells of her famous mushroom barley soup, which she schlepped to the hospital, would revive him. When my dad awoke, Bubbe was standing there with a big pot, a bowl and a ladle — fully believing in the healing powers of her thick broth, made with beef bones, beef chuck and tomato paste.

My bubbe cooked all through the night when my dad was in the hospital, showering him with cinnamon raisin rugelach, sponge cake with an orange glaze, and mandel bread with big chocolate chips — feeding him obsessively, but never telling him she loved him.

My dad wanted to feel comforted by all the amazing food she had worked so hard to prepare, but he felt angry. He wanted to be thin. He wanted to be popular. He wanted to have self-confidence. The very food, which brought him such extreme pleasure, caused him to be bigger than the other kids, leading to ridicule and worse, landing him in the hospital.

When my dad dieted, he felt as if he was betraying my grandmother and dissolving the one bond they shared. Of course, as a child I didn’t know any of this; I didn’t understand the relationship between my father, my grandmother and food. I just knew that Bubbe Mary was a wonderful baker, and my dad missed her even though he would never say it.

As my dad served us each a warm bowl of mushroom barley soup with sweet parsnips and bay leaves, we looked at each other. “Eat your soup. It’s good food,” we said in unison — imitating Bubbe’s Yiddish accent.

The next day when my dad came home, he smiled, announcing the new tag line and jingle for Campbell’s soup, “Soup Is Good Food,” inspired by my bubbe’s soup.

The soup that revived my dad when he was in a coma. The soup he taught me to cook. The soup that said “I love you” the way Bubbe showed her affections best — spoonful by spoonful.

Mushroom Barley Soup : This soup is made with nourishing bone broth and root vegetables.

Dawn Lerman is a New York-based health and nutrition consultant and author of the newly published book, My Fat Dad: A Memoir of Food, Love, and Family with Recipes,. Her series on growing up with a fat father appears occasionally on Well.