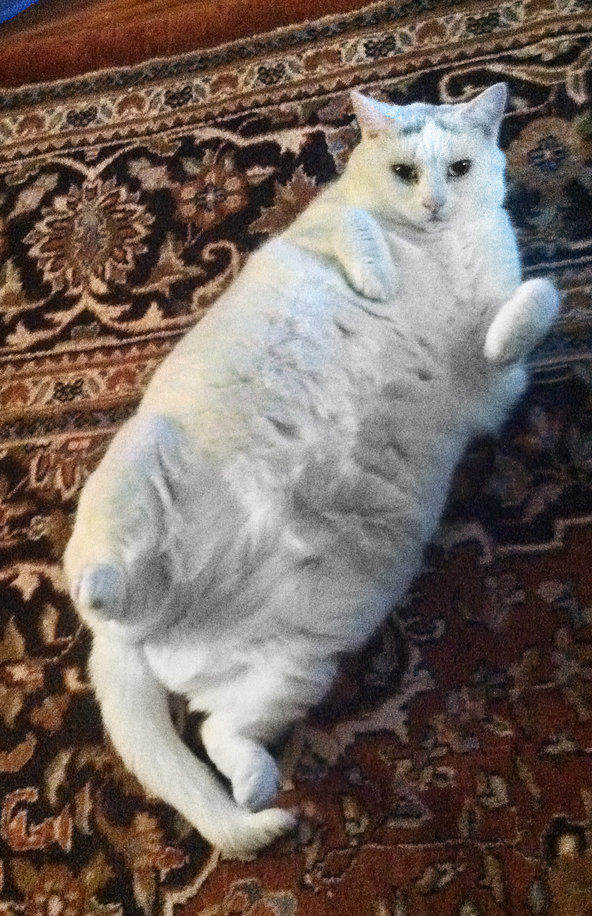 Maya, a cat owned by Larissa and Doug Peluso, of Eatontown, N.J., was overweight. The Pelusos feared she wouldn’t like her new diet.Credit

Maya has had a tough time slimming down. After 16 months of dieting, she’s dropped 10 pounds and 6 ounces.

True, that’s more than 40 percent of her body weight.

At her heaviest, the domestic shorthair cat tipped the scale at 24.9 pounds. She looked like a furry Pilates ball.

The decision to lose weight was not Maya’s; it was her owners’, Larissa and Doug Peluso, of Eatontown, N.J. Maya’s mobility was decreasing: She could no longer jump on their bed, and they knew she might be suffering from joint pain and facing diabetes. Their vet said they had to help her regain her feline figure.

If they reduced portions, Mrs. Peluso worried, “Would Maya get aggressive and depressed?” With no treats to curry Maya’s good graces, “Maybe she would hate us.”

But a new study in The Journal of Veterinary Behavior suggests that owners need not fear rejection if they restrict their cats’ calories. After an eight-week diet, the cats actually demonstrated more affection after they were fed, their owners reported.

Veterinarians not involved in the study, by researchers at Cornell University College of Veterinary Medicine, hailed the findings.

“Maybe owners will now be more likely to do what’s healthy for their cats,” said Dr. Bonnie Beaver, executive director of the American College of Veterinary Behaviorists. ”

In recent years, the epidemic of overweight and obese cats has alarmed veterinarians. “My friends in general practice now say they are surprised when a cat comes in with an ideal body weight,” said Dr. Martha G. Cline, a veterinary nutritionist at Red Bank Veterinary Hospital in Tinton Falls, N.J., who monitors Maya’s weight.

Many factors contribute to weight gain in house cats. Among them is the complexity of the human-animal bond, namely how humans demonstrate love with food, and how cats learn “affectionate behavior” in order to get fed.

“We say, ‘dogs have owners, cats have staff,’” said Dr. Richard E. Goldstein, chief medical officer at the Animal Medical Center in New York. “A cat learns to manipulate us very well: when she’s hungry, she’s the most affectionate cat in the world. And people will do anything to keep their cats happy.”

Concerned with the human role in feline obesity, Cornell researchers asked: If a cat’s food were reduced, would its behavior change? If so, how would owners translate those changes? For the study, 48 cats, each at least 25 percent over ideal weight, were put on one of three restricted diets, equal in calories. Owners answered extensive questionnaires about their cats:

Before the diet, when your cat was hungry, did it beg? Meow? Pace? After feeding, did it jump in your lap? Since the diet, does your cat bat at you? Hide? Hiss? Steal food?

Good news, cat owners! More than three-quarters of the cats lost weight. And though the frequency of pre-feeding behavior increased — begging, meowing, pacing — it did not begin earlier. (Translation: The cats may have intensified owners’ guilt about giving them less food, but did not protract their misery.)

Better yet, owners felt that despite the restricted feeding, the cats did not turn vindictive. Instead, owners believed the cats showed more affection. After feeding, the cats would more often purr and sit in the owner’s lap.

“We don’t know why,” said Dr. Beaver. “But cats don’t hold a grudge if you limit their food.”

Dr. Emily D. Levine, the study’s lead author, now a veterinary behaviorist in Fairfield, N.J., said that one reason cats gain too much weight is that owners “misread” their pet’s behavior, unwittingly reinforcing it with treats. .

When cats rub up against their owners throughout the day, owners like that behavior, she said, so they feel guilty and think, “ ‘Oh, they must want more food.’ So people feel good feeding their cats and don’t know other ways to give them affection.”

And sometimes, if cats are expecting to be fed and the owner isn’t obeying, the cat may swat. “So you feed them to stop the behavior. There’s a learned component. It works.

“A lot of cats are bored and that’s the bigger picture,” she said. “If the only thing they have to do all day is eat, they will ask for more and more.” Rather than overfeed cats to please them, she said, owners could engage their natural curiosity with interactive play, even training them — really — to go to their place and wait for food.

Over the years, Mrs. Peluso didn’t notice as Maya, now 11, gained weight, a phenomenon similar to that of parents who do not see their children becoming obese.

Putting Maya on a diet was hard. “The begging! The meowing! I felt like I was torturing her!” she said.

With just a few more pounds to reach her goal, Maya is a different cat. “The light is turned on inside her,” said Mrs. Peluso. Maya chases toys and plays hide-and-seek with their other cat. “She can jump on our bed and sleep with us,” she said. “We unknowingly got her into that situation, but we’ve been able to bring her back.”

“My mother says, ‘Where are the treats? The cats need to know I love them!’” And so, Mrs. Peluso said, “I have to hide cat treats from my mother.”