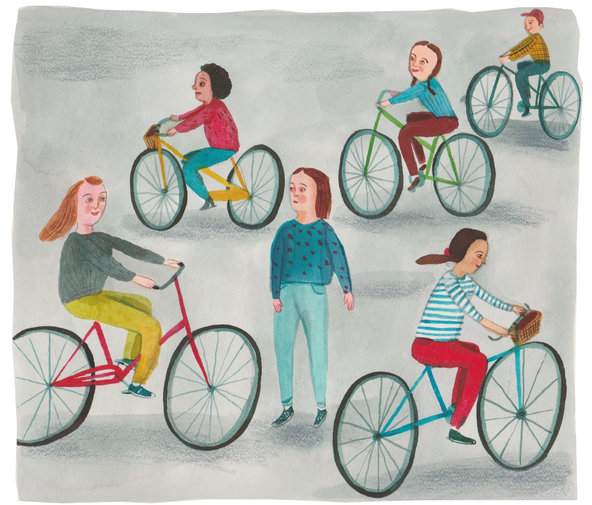 When I outgrew my tricycle, my mother never replaced my wheels. Enviously I watched as the other kids in my neighborhood mounted their shiny Schwinns, confident cowkids on imaginary mares. They wobbled side to side on training wheels, inserted cards into the spokes as noisemakers, and sailed by with colorful banners flowing from handlebars. I was the one kid on the block with only feet as transportation.

My mother, a first-generation American, never learned childhood pleasures like how to swim or skate. Her widowed Russian immigrant mother, unable to support her, placed her in the Hebrew Home for Orphans in Jersey City when she was 2 until her teens. Sensible shoes took precedence over fun.

Growing up without a mother as a role model, Mom later relied on Dr. Spock for parenting advice, supplemented by rumors and old wives’ tales. When I asked why I couldn’t have a bike, she found it hard to explain. It was more than the sticker price, or a fear that I’d fall and break bones. Finally she said, “It’s just… you could hurt yourself. Permanently.”

I didn’t understand until much later that she somehow believed I’d lose my virginity. She thought she was protecting me, in more ways than one. I bitterly watched my friends ride off, leaving me behind. I was the tortoise in our neighborhood Tour de France.

When Mom wasn’t watching, my friend Lonny let me hop aboard his bike, holding me steady until I learned to steer around my driveway in Sheepshead Bay, Brooklyn.

By the time I graduated from college, my mother’s thinking had evolved. She bought a heavy old used bike, relying on me to teach her to ride. Helmetless to the library and back again, gray hair tousled in the wind, she proved it was never too late to discover the joys of going out for a spin.

When I was married she finally approved of my first two-wheeler. We rode around, side by side. “Isn’t this fun?” she asked, stopping for a red light. Nodding, I didn’t confess that I wished we could have shared these kinds of activities together when I was young. I silently vowed I’d be a different kind of mother.

I bought my daughter, Amy, her first bike when she was a toddler, one of those contraptions with a long handle for a parent to push and steer. Proudly I measured her development by her bicycles. The first one, pink with streamers, sold at the end of the summer to an even smaller girl for $10. Her first “big bike” in neon blue. I sprinted beside her when she cast off her training wheels.

Every summer my family drove to a lakeside utopia to vacation with our three bikes — Papa, Mama and Baby — perched on top of the car. Eventually I let Amy take off on her bike with friends to the playground, or the mythical place under Thunder Bridge where kids mistook raccoons for monsters.

Driving home one August when Amy was 10, we were singing show tunes in the car when we heard an alarming noise. In the rearview mirror, we saw our rooftop bike rack fly onto the highway at 70 miles per hour, landing with a thud, toppling over in the right lane of the highway — luckily deserted.

My husband backed up 100 feet to the carnage. Amy, sitting up on her knees to see through the rear window, sobbed as she saw our family of bicycles, disabled on the road. The bike rack was defective, and its anchor had loosened on top of our car.

I stroked Amy’s arm, unable to hug her from the front seat. Then I echoed my mother’s voice, recalling the time she reassured me that she had minimal injuries after her car tires blew out on the highway: “Things can be replaced. People can’t.”

Amy stared at her bent wheel, the torn seats of all three, my basket crushed flat. “My bike can’t be replaced!” Her bike was a symbol of independence and growing up, the freedom of wheels that I hadn’t had at her age.

Just that morning we’d taken a farewell ride to say good-bye to the lake, feeding ducks leftover bread, a three-generational family ritual started years ago by my mother, and continued after she died.

“We’re lucky we had one last ride together,” Amy said now, watching grimly while my husband, Steve, dragged the bikes and twisted rack off the highway. We dialed 911 and waited for a state trooper to arrive. No one had been hurt, but we had the wreckage to contend with: The rack was ruined and there was no way to fit the bikes in the car.

Amy, freshly freckled from weeks in the sun, stroked her bike’s front tire. This was her first brush with the startling reality that everything can change in an instant.

She scraped the registration sticker from her bike frame, her own personal memory. I knew then, just as my mother eventually realized, that I wouldn’t always be able to protect my daughter from harm. And like my mother, I would never stop trying. But I also learned the value in encouraging my daughter to have adventures I’d been denied, even if they sometimes end with tears.

Candy Schulman is a writer working on a memoir about her mother.