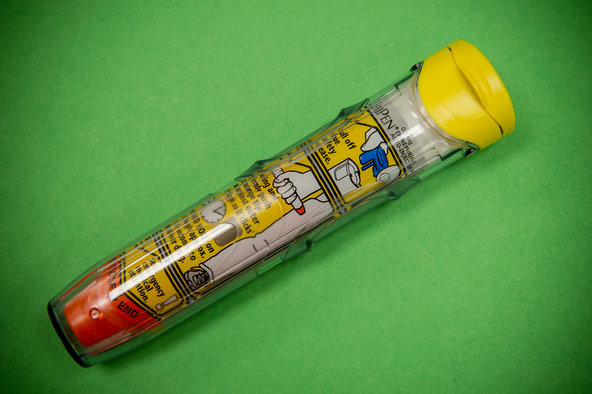 A steep increase in the price of the EpiPen, a lifesaving injection device for people with severe allergies, has sparked outrage among consumers and lawmakers who worry that parents won’t be able to afford the pens for children heading back to school.

With a quick stab to the thigh, the EpiPen dispenses epinephrine, a drug that reverses swelling, closing of the airways and other symptoms of a severe allergic reaction to bee stings, peanuts or other allegens.

Mylan, the pharmaceutical company, acquired the decades-old product in 2007, when pharmacies paid less than $100 for a two-pen set, and has since been steadily raising the wholesale price. In 2009, a pharmacy paid $103.50 for a set. By July 2013 the price was up to $264.50, and it rose 75 percent to $461 by last May. This May the price spiked again to $608.61, according to data provided by Elsevier Clinical Solutions’ Gold Standard Drug Database.

Doctors advise allergic patients to carry two EpiPens with them at all times in case an extra dose is needed to quell a severe reaction. Most parents buy multiple EpiPens for home, in the car and school and must replace them annually, even if they haven’t been used, since they expire after a year.

Mylan has declined to comment on the price hike, issuing a statement pointing the finger at high-deductible health plans that require consumers to pay much more out of pocket for many drugs. The company said a $100 coupon they offer for the product means most people don’t pay anything for the pens.

But how the price hike affects consumers varies widely, depending on the prices charged by their local pharmacy and the details of their insurance plan. People without insurance or with high-deductible insurance plans can’t always use the coupon and are paying about $640 a set, said Michael Rea, the chief executive of Rx Savings Solutions in Oberlin Park, Kan. Other patients say that even with good insurance, their copayments are as much as four times higher than in the past.

Naomi Shulman of Northampton, Mass., has a 12-year-old daughter who is allergic to cashews and keeps EpiPens at home and school. Last year, Ms. Schulman’s out-of-pocket co-pay for an EpiPen two-pack was $100. But because EpiPens expire after one year, Ms. Shulman had to buy another two-pack to send along to her daughter’s camp this summer. Her cost for the same two pens was $400.

For the first time in 10 years, Ms. Shulman said she briefly considered forgoing the purchase, but didn’t want to risk it. “It’s very wrong,” she said. “It’s gouging parents about their children’s lives. It’s not like letting them sniffle. It’s life or death.”

Laurent Barr of Clark, N.J., said her co-pay on EpiPens has risen from $141 to $245 in a year, and she will spend $735 this year for a supply of three EpiPen sets. Her 6-year-old daughter Leah is allergic to rice, tree nuts and mushrooms.

“The price of EpiPens has been getting progressively worse over the years, but now it is just obscene,” Ms. Barr said.

The price hike has caught the attention of Washington lawmakers. Senator Amy Klobuchar, Democrats of Minnesota, who has a daughter who carries an EpiPen, has called on the Senate Judiciary Committee and the Federal Trade Commission to review whether the price hikes violate any anti-competition rules. Last year, the drug maker Sanofi recalled a competing product, Auvi-Q, because it may not have been delivering the correct amount of epinephrine, leaving the EpiPen as the primary emergency treatment for severe allergic reactions.

“This is a mainstream product that people carry, and it’s getting harder and harder for people to afford it,” said Senator Klobuchar. “It’s just another example of what we keep seeing, outrageous price increases when a monopoly situation ends up in a company’s lap.”

Senator Chuck Grassley of Iowa called on Mylan to explain the price hikes, noting that they impose a burden on both parents and school districts, who often keep supplies of the pen at the ready.

A petition to Congress protesting the price increase, called “Stop the EpiPen Price Gouging,” has emerged on social media. It has collected more than 48,000 signatures.

Tonya Winders, president of the Allergy & Asthma Network, said her group is planning to work with other advocacy organizations to make the EpiPen a more universally-covered expense through a federal preventative services task force. She said most families are not feeling the impact of the EpiPen price hike because they have commercial insurance plans with lower co-pays and deductibles. The families most affected by the price hike are those who don’t have insurance or those with high-deductible health plans, she said.

“A lot of the families that are being hit with sticker shock are the ones that opted into high-deductible health plans in 2016,” Ms. Winders said. “We believe that Mylan should design a program specifically for those in that high-deductible rate.”

In April, a pharmacist told Sarah Brown of Boulder, Colo., that her co-payment on an EpiPen two-pack would be $585, even with a $100 coupon from Mylan. She said she had no choice but to take her chances and hold on to her expired EpiPens instead. “It was a gamble,” she said.

In August, Ms. Brown’s family switched insurance plans so they could afford three packs for home, school and a grandmother’s house. Now, with the new policy and the Mylan coupon, she gets her pens at no charge. “The difference in insurance coverage means being able to afford them or not,” Ms. Brown said.