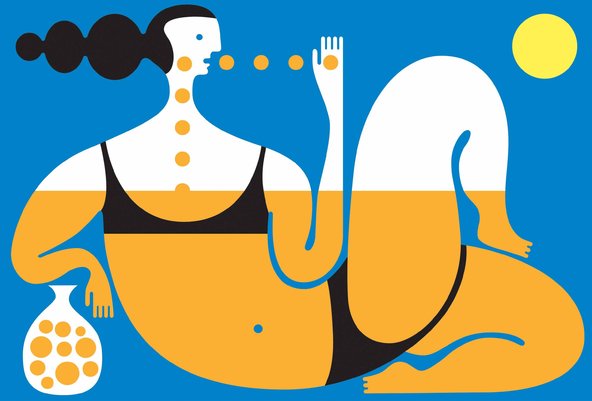 Every morning before Scott Kyle, a 53-year-old competitive sailor from San Clemente, Calif., hits the water, he chugs an orange-flavored beverage named UVO, a drinkable sunscreen intended to fight off sunburn from the inside out.

The vitamin-rich cocktail, available on the internet and at dozens of medical spas, tanning salons and pharmacies across the country, contains 30 immune-boosting antioxidants and other nutrients that, the makers say, help protect and repair the skin from sun damage.

“Normally I would be sunburned for a couple of days, and now I’m not,” Mr. Kyle said. “I’ve given it to other sailors, and they notice a difference. Now they come up to me and say, ‘Have you had your UVO today?’”

Mr. Kyle is not alone. A growing number of outdoors enthusiasts are turning to new sunscreen products that are said to protect the skin from harmful rays without the need to apply — and reapply — messy lotions and gels. But there is scant scientific evidence that the products actually work, or whether they have potentially harmful side effects.

In New York’s Hamptons, beachgoers pass around bottles of orange pills called Heliocare and pop the supplements as if they are a party drug. The herbal remedy is made from a fern called Polypodium leucotomos that is native to Central and South America, and its makers say that it helps the skin be more resilient to the sun and maintain a youthful look.

Stephanie Kokolis, a 29-year-old physician assistant in Houston, includes Heliocare as part of her morning vitamin routine. “It’s a pill, it’s easy to take, there are no side effects, it’s safe,” she said. “So why not?”

She said that seeing patients every day who come in with skin cancer and other sun-related problems made her realize “starting early with protection is the better route to go.” She has persuaded many patients to take the pill, she said.

Dr. David J. Leffell, the chief of dermatologic surgery and cutaneous oncology at the Yale School of Medicine, said that he understood the appeal of these alternative sunscreen products. “If you tell someone, ‘You can take this pill before you go out or you can drink this nice, refreshing, berry-flavored drink,’ they are hearing ‘magic bullet,’” he said. “They think, ‘I’ll drink this, and then I can do whatever I want because I’ll be protected.’”

But “there is no scientific evidence whatsoever that UVO functions as a sun protector,” or that any of these oral sunscreen products do what they say they do, Dr. Leffell said. “There is a sucker born every minute.”

Most of these products, including UVO and Heliocare, are considered dietary supplements, not medicines, so they don’t have to undergo the rigorous testing needed to receive approval from the Food and Drug Administration.

“There really isn’t enough information available to evaluate the effectiveness of these alternative sunscreen products,” Deborah Sarnoff, the senior vice president of the Skin Cancer Foundation, said in an email.

Dr. Darrell Rigel, a clinical professor of dermatology at New York University School of Medicine, said he was not surprised that so many companies were working on alternatives to sunscreen. “In general, people don’t like to use sunscreens,” he said. “They are greasy and sticky, and you have to cover everything.” A study released by the American Academy of Dermatology last year found that only 14.3 percent of men and about 30 percent of women reported that they regularly used sunscreen.

Dr. Rigel called many of the new alternative sunscreen products “hogwash” and warns his patients to stay away from pills whose makers say they have no side effects; it usually means they have no benefits, either, he said. Many experts also express caution about taking products rich in antioxidants, which in high doses can have potentially dangerous side effects.

Oral sunscreen products also present a “chemical engineering challenge,” Dr. Rigel said, because it’s unknown how much of an active ingredient might pass through the stomach and still be effective, then spread to the skin to provide an even layer of protection.

Celeste Hilling, the chief executive and a founder of the company Skin Authority, has spent the past few years transforming products people use every day into sun repellents. “Manufacturers have to make sun protection a simple, one-step process,” she said.

The company makes a skin moisturizer and shave serum that leaves behind particles of titanium dioxide, a chemical that has been shown in studies to block ultraviolet rays. But, like sunscreens, they are easily washed off by water and sweat.

Other companies are working on laundry detergents with sunblockers to help clothes better protect the skin against the sun, bracelets that change color when the body is absorbing too many UV rays, and various other edible forms of sunscreen.

“I consult with a variety of start-up biotech firms that are focused on the science for this,” Dr. Rigel said. But right now, he advises, the safest best is to stick to the old-fashioned methods: apply and reapply sunscreen, cover up during the hottest hours of the day and stay in the shade as much as possible.

Of course, not all consumers care about doctors’ opinions. Mr. Kyle said he did his own controlled experiment, in which he sailed with and without UVO for a few days.

“I could totally see a noticeable difference,” he said. “I don’t really care what doctors think, because it works on me.”