Dr. Andrew Weil, still sporting his trademark white whiskers at age 75, says that we are taking too many medications. Dr. Weil is perhaps best known for popularizing the concept of integrative medicine, which melds traditional medicine with “alternative” healing techniques. 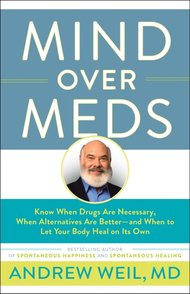 In his new book, “Mind Over Meds: Know When Drugs Are Necessary, When Alternatives Are Better — and When to Let Your Body Heal on Its Own,” Dr. Weil talks about how doctors are contributing to the overuse of drugs, why many of us should not be taking statins to lower cholesterol, and why many of the medicines and herbs we buy at pharmacies and supermarkets may be harming our health. Here is an edited version of our conversation.

Q. You say in your book, “We have a problem.” What exactly is that problem?

A. Too many people are taking too many medicines — something that has been building steadily through the past century. There’s a deep-rooted mind-set on the part of both doctors and patients that medication is the only legitimate way to treat disease. People expect to be medicated when they go to doctors, and this is all doctors are trained to do. They’re not taught other methods for managing common conditions. The efforts of big pharma contribute to this situation, both by upping the expectations of patients and by shaping the behavior of doctors.

Q. What’s your beef with statins, which you write in the book are so venerated that many doctors say they might as well be put in the water supply?

A. I think that the importance of statins — like Lipitor, Zocor and Crestor — tends to be greatly over-exaggerated. I think their usefulness — and there definitely is usefulness there — is lowering LDL, or the “bad” cholesterol, especially for people who are at high risk of a heart attack and those with a history of heart attack, stroke or poor circulation in their legs.

But lowering LDL cholesterol is only one factor in the complexity of factors that influence arterial health. Bottom line: Statins really should not be the first line of defense against cardiovascular disease and shouldn’t be used as standalone treatments but rather be part of a comprehensive approach to cardiovascular disease that includes lifestyle changes, especially dietary changes, physical activity and stress reduction. Also, there are side effects like muscle pain, cognitive impairment and an increased risk of diabetes.

Q. Many of us would rather skip the effort — exercise, dietary changes — and just take a pill, whether for insomnia, diabetes, the common cold or depression. How do you change that mind-set?

A. Medications can be very useful for short-term health problems, but in my view they should not be stand-alone treatments for long-term management of chronic health conditions. Not only because of the risks of toxic reactions, but also the possibility that they could prolong or intensify conditions as a result of the body’s homeostatic reaction to them as it tries to rebalance itself.

For instance, patients on P.P.I.s (proton pump inhibitors) — like Prilosec, Nexium and Prevacid for GERD — need to understand that once on these medications for any length of time, it is very difficult to get off them because symptoms return worse than before. Better not to start on them at all.

Here’s another example: I would only use antidepressants for very severe depression and then only for a year at most. With long-term use, they can intensify or prolong depression. For mild to moderate depressions I would try other measures: regular exercise, reducing caffeine, acupuncture, cognitive therapy, vitamins B and D, St. John’s Wort, fish oil — and spending more time in the company of happier people.

I believe that if you present information to people in the right way, they will get it. Some alternatives to medications work quickly. For instance, stinging nettle works just as fast as any antihistamine for hay fever, without any of the downside of the antihistamine.

Q. What about over-the-counter products and supplements?

A. When we see patients at our integrative medicine clinic, we ask people to bring in everything they’re taking — and they come in with shopping bags full. A lot of what’s sold over-the-counter now includes drugs that originally were prescription only, but people think O.T.C. drugs are benign and without the risks of prescription drugs.

A lot of people are also taking dietary supplements and herbal remedies from natural products, without considering the interactions with prescriptions and other O.T.C. products. There are additive blood-thinning effects (fish oil or vitamin E taken with Coumadin), additive sedative effects (valerian used with antihistamines) and the prolongation or intensification of drug effects (St. John’s wort and S.S.R.I. antidepressants).

Q. What O.T.C. products should we really worry about and why?

A. Let’s start with NSAIDs (non-steroidal anti-inflammatory drugs, such as aspirin, ibuprofen and naproxen). These are strong drugs and can be very useful for short-term management of conditions, but they carry some very severe risks of increased bleeding and other cardiovascular and kidney problems.

Then there are the P.P.I.s, originally prescription-only, but now available in over-the-counter forms like Nexium. People should not get on these drugs in the first place. They’re very high risk for dependence, and there are a lot of other problems with them.

Another huge category are sleep aids. Most over-the-counter sleep aids are antihistamines like Benadryl. Not only do these not reproduce natural sleep, they can cause urinary retention, and there’s also an association with dementia.

Q. What about O.T.C. medications for the common cold and flu?

A. In most cases they are useless. The common ones — decongestants, cough suppressants — really don’t work in the first place. You would be better off just letting time take its course, with sensible precautions like rest and fluids. There are some natural products that may be useful for colds and flu specifically, such as andrographis and astragalus — and those that aren’t, echinacea and oscillococcinum.

Q. What concerns you most about medications being prescribed to kids, and what should parents do?

A. The biggest thing I’m concerned about is the incredible prescribing of psychiatric drugs to kids today, such as benzodiazepines like Ativan for anxiety, S.S.R.I.s like Zoloft for depression, antipsychotic drugs like Seroquel, along with drugs like Adderall and Ritalin for A.D.H.D., which is a diagnosis that is given way too freely. My main concern is that we really have no idea what the effects of these medications are on the developing brain, and we’re doing a vast experiment with our nation’s children in giving this amount of psychiatric medication to them.

Another concern is how easily medication — for instance, Orlistat — is used in kids as a first-line intervention for obesity, which would be better addressed by working on the lifestyle issues that are root causes. A main message of my book is to be informed about medications — about their benefits, their risks, their appropriate uses, and what alternatives exist to them.

Q. How successful do you view your lifetime efforts to change how medicine is practiced in this country?

A. We graduated almost 1,500 physicians from our fellowship training program at the University of Arizona Center for Integrative Medicine and have many more residents who are being trained in integrative medicine in 60 programs in the United States, and there are now 12 volumes of the Weil Integrative Medicine Library Series for clinicians. The demand of patients for this kind of medicine is also increasing, becoming mainstream in the United States. I’m confident that one day soon, we’ll be able to drop the word “integrative” — it will just be good medicine.