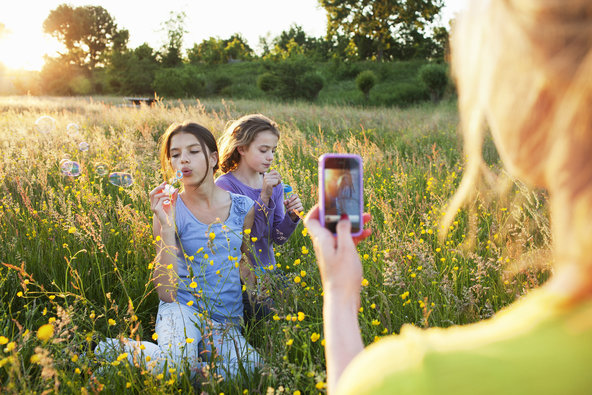 Recently, university researchers asked children and parents to describe the rules they thought families should follow related to technology.

In most cases, parents and children agreed — don’t text and drive; don’t be online when someone wants to talk to you. But there was one surprising rule that the children wanted that their parents mentioned far less often: Don’t post anything about me on social media without asking me.

As in, no pictures of them asleep in the back of the car. No posts about their frustration with their homework. That victory picture after the soccer game? Maybe. The frustrated rant about the fight you just had over laundry? No way.

The answers revealed “a really interesting disconnect,” said Alexis Hiniker, a graduate student in human-centered design and engineering at the University of Washington who led the research. She, along with researchers at the University of Michigan, studied 249 parent-child pairs distributed across 40 states and found that while children ages 10 to 17 “were really concerned” about the ways parents shared their children’s lives online, their parents were far less worried. About three times more children than parents thought there should be rules about what parents shared on social media.

Sites like Facebook and Instagram are now baked into the world of today’s families. Many, if not most, new parents post images of their newborn online within an hour of birth, and some parents create social media accounts for the children themselves — often to share photos and news with family, although occasionally in the pursuit of “Instafame” for their fashionably clad, beautifully photographed sons and daughters.

With the first babies of Facebook (which started in 2004) not yet in their teens and the stylish kids of Instagram (which started in 2010) barely in elementary school, families are just beginning to explore the question of how children feel about the digital record of their earliest years. But as this study, although small, suggests, it’s increasingly clear that our children will grow into teenagers and adults who want to control their digital identities.

“As these children come of age, they’re going to be seeing the digital footprint left in their childhood’s wake,” said Stacey Steinberg, a legal skills professor and associate director of the Center on Children and Families at the University of Florida Levin College of Law. “While most of them will be fine, some might take issue with it.”

Some children and teenagers question both past and present sharing. “I really don’t like it when my parents post pictures of me on their social media accounts, especially after finding out that some of my friends follow them,” said Maisy Hoffman, 14, an eighth grader who lives in Manhattan. “I worry more about my dad. He doesn’t always ask if he can post things, so I immediately turn away and ask if he’s going to post it. Or I’ll find out later because my friend saw something of me on his Instagram and I’ll have to ask him to take it down.”

Other parents can also present a problem for the child who prefers to control how she appears online. Wendy Bradford, a mother of three elementary-school aged children in Manhattan, said that when parent chaperones took pictures during a third-grade field trip to the zoo, her daughter “hid when she saw the phones because she didn’t want the pictures to be posted on Facebook with her in them.”

Isabella Aijo, 15, a high school sophomore in Natick, Mass., said, “I definitely know people who have parents who post things they wish weren’t out there. There was a girl in my eighth grade class whose mom opened a YouTube account for her in the fourth grade to show off her singing,” she wrote to me in an email. “Finally, on one of the last months of middle school, a peer played the song in class and almost the entire class laughed hysterically over it.”

Those early posts from parents linger, not just online, but in our children’s memories — and the topics may be things we don’t see as potentially embarrassing. The son of a friend (who asked that I not use her name) still brings up things she wrote about his picky eating when he was younger — years ago, she says.

But that kind of sharing — about food issues, potty training and tantrums — is exactly the kind of sharing that can be valuable. “Children benefit from the community created when parents have the ability to share their stories,” said Ms. Steinberg. Those posts about picky eating might have helped my friend find solutions, or a fresh wellspring of patience for a behavior her child would eventually outgrow.

“Parents often intrude on a child’s digital identity, not because they are malicious, but because they haven’t considered the potential reach and the longevity of the digital information that they’re sharing,” said Ms. Steinberg.

In general, said Sarita Schoenebeck, an assistant professor at the University of Michigan School of Information, who co-authored the research, both children and parents considered positive images, events and news more appropriate to share than negative ones. Parents can consider, too, the searchability and reach of the format (although those are always evolving). A frustrated tweet about a child who won’t eat her cereal because it’s not in a red bowl is a lot less likely to resurface than a YouTube video of the resulting tantrum. Looking for advice or sympathy about a behavioral problem? Skip both the image, and your child’s name, in a post to limit later searches.

At our house, I sometimes see the hesitation in my oldest son, who is 14, when I bring out the camera at a goofy moment, but we have a whole house rule: no sharing images of anyone else without their consent, ever. That trust means I get my candid shots, and he keeps his digital identity, whatever he eventually wants it to be, intact.