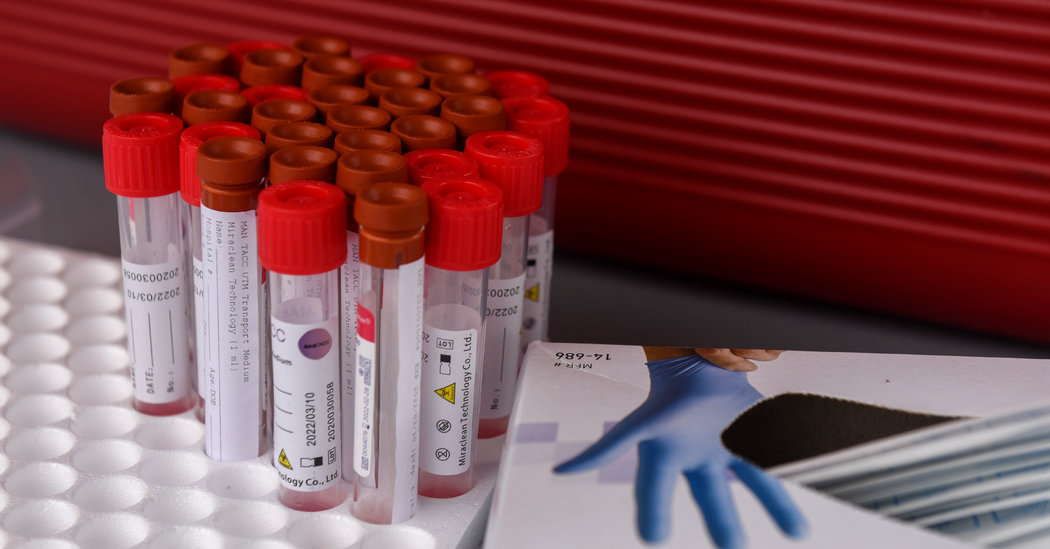 In recent months, Dr. Denise Hooks-Anderson has grown accustomed to saying “no.”

That’s the answer she always gives when her patients in Richmond Heights, Mo., ask whether she can test them for the coronavirus.

“At our practice, we’ve never been able to do testing,” said Dr. Hooks-Anderson, a family medicine doctor whose patients are largely African-American, a group disproportionately burdened by the coronavirus. In her office and many others, there simply is not enough protective equipment, like masks and gloves, to keep staff members safe while they collect potentially infectious samples.

Dr. Hooks-Anderson worries about her patients, whom she encourages to look elsewhere for a test if they suspect an infection. Still, the dangers are too great for her practice to become directly involved, she said: “Are we willing to take that risk? To essentially take out the entire staff if someone were to get infected? In the midst of a pandemic, that becomes a big issue.”

Back in March, after President Trump declared the coronavirus a national emergency, doctors felt ill-equipped to diagnose their patients or counsel them on treatment and prevention. Three months later, testing numbers are up. But primary care physicians — the doctors that many turn to first when their health declines — are not always equipped to check their patients for the pathogen. And community testing sites have not been evenly distributed, snubbing some populations most vulnerable to the ill effects of the virus. Many Americans hoping to get tested are not even sure where to start looking.

Physicians like Dr. Hooks-Anderson are concerned that these issues will not be any closer to being resolved in the coming weeks and months, even while demand increases as states reopen, employees resume in-person work and parents seek care and schooling for their children. The situation may grow especially dire by autumn, when health officials expect to see a rise in infections, above and beyond the ongoing outbreaks that will likely last through the summer.

“Things are going to get ugly in the fall,” said Dr. Gabriela Maradiaga Panayotti, a pediatrician at Duke University Medical Center in Durham, N. C. “I don’t know if anybody knows how that’s going to be handled.”

Since the virus made landfall in the United States, more than 30 million diagnostic tests have been administered to patients across the country, according to the Covid Tracking Project. These tests, which hunt for bits of coronavirus genetic material, can help a person figure out if they are currently infected, even in the absence of symptoms. (Antibody tests, on the other hand, indicate whether someone had the virus in the past.)

But testing rates still fall short of where experts say they should be. And because the coronavirus can infect and spread from individuals who don’t show signs of illness, the strength of its grip on the nation remains unknown.

Concerns surrounding the nation’s stock of coronavirus tests aren’t new. Sputtering supply chains have been an ongoing problem, caused by delays in F.D.A. approvals and flaws in an early C.D.C. test. The result was a lost month during which the virus spread undetected. Even after independent manufacturers were finally allowed into the fray, they struggled to keep pace.

In the months since, the government has granted emergency use authorization to dozens of diagnostic tests, which are now widely available in many locations, including community health centers, urgent care centers and pharmacies like CVS and Walgreens. But “we’re still catching up,” said Dr. Alexander McAdam, director of the Infectious Diseases Diagnostic Laboratory at Boston Children’s Hospital. That means a significant proportion of Americans who want a test still cannot get one.

Eligibility and convenience vary widely between sites, even within neighborhoods. Some sites have only enough capacity to swab people with symptoms and who are at highest risk of falling ill; others won’t swab patients before they have been screened by a doctor. Logistical hiccups at the laboratories that process the samples can also keep test results out of patients’ hands for days.

A few of these hurdles could be cleared by ramping up production of point-of-care tests that do not need to be sent away to a laboratory. Patients could be tested and counseled by the same provider, perhaps without even leaving the room. Such tests could even be distributed to common points of congregation, including schools and workplaces. “A point-of-care test would be a game changer,” Dr. Maradiaga Panayotti said.

But only a small handful of the diagnostic tests that have been given the F.D.A. green light meet point-of-care criteria, and their manufacturers already strain to churn them out at maximum speed.

Even health networks that have developed their own coronavirus tests, like Nebraska Medicine, cannot offer assessments to all of their own patients, said Dr. Nada Fadul, who directs the network’s H.I.V. clinic in Omaha.

“Many researchers are advocating for testing contacts” of people with confirmed infections, Dr. Fadul said. “We’re still at the point where we’re just barely able to test the symptomatic patients.”

Tests are also especially scarce among primary care physicians. Many smaller doctors’ offices are not set up to grapple with the logistics of collecting samples of a highly contagious and dangerous pathogen.

“We don’t have the luxury of space to do separate sick areas or swabbing areas,” said Dr. Hai Cao, a pediatrician at South Slope Pediatrics in Brooklyn. “It would be nice if we did. But in our limited space, I don’t see that as being a prudent move.”

To complicate matters further, not all Americans have a doctor to consult, said Dr. Utibe Essien, a physician and health services researcher at the University of Pittsburgh’s School of Medicine. Coronavirus testing is covered under insurance in the United States, but about 28 million people in the country remain uninsured. The federal government has set aside money to foot the bill for these patients, but some could still be saddled with unanticipated costs. Fear of an enormous medical bill can be enough to drive someone away from a testing site altogether, said Dr. Maradiaga Panayotti.

On the whole, testing still is not reaching some communities that need it most.

Dr. Brittani James, a family medicine doctor at Mile Square Health Center in Chicago, said the testing center in the parking lot outside her practice is not even close to testing at capacity. In her community, where many residents are African-American, rates of employment and housing security are low; people often cannot afford the car or bus fare that would ferry them to a testing site. Some of Dr. James’s patients, disillusioned by decades of institutional racism, are also hesitant to visit testing sites with ties to the government, she said.

The barriers to getting a test are so high that “we can’t even get to the point of, ‘Are there enough tests?’” Dr. James said.

Existing disparities may only be exacerbated by the approach of the fall season, when other respiratory illnesses that share symptoms with Covid-19, such as the flu, reappear, and schools invite students back to campus.

While coronavirus case numbers continue to balloon, many American cities are reopening — among them, St. Louis, where Dr. Hooks-Anderson is dreading what’s to come.

“I think it’s only going to get worse,” she said. “I would love to be wrong.”