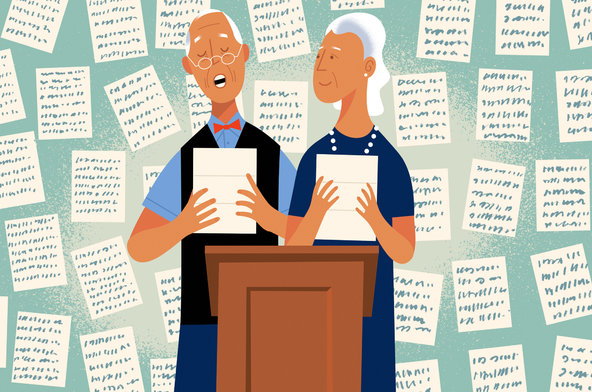 Can you keep the love light shining after your partner’s brain has begun to dim? Just ask Denise Tompkins of Naperville, Ill., married 36 years to John, now 69, who has Alzheimer’s disease.

The Tompkinses participated in an unusual eight-week storytelling workshop at Northwestern University that is helping to keep the spark of love alive in couples coping with the challenges of encroaching dementia.

Every week participants are given a specific assignment to write a brief story about events in their lives that they then share with others in the group. The program culminates with a moving, often funny, 20-minute written story read alternately by the partners in each couple in front of an audience.

Each couple’s story serves as a reminder of both the good and challenging times they have shared, experiences both poignant and humorous that reveal inner strength, resilience and love and appreciation for one another that can be easily forgotten when confronted by a frightening, progressive neurological disease like Alzheimer’s.

“It’s been an amazing experience for us,” Mrs. Tompkins said of the program. “Creating our story revealed such a richness in our life together and is helping us keep that front and center going forward.”

She added that the program provides “an opportunity to process what you’re going through and your relationship to each other. It helped me digest all the wonderful things about John and how well we relate as a couple, things that don’t go away with Alzheimer’s disease. John is so much more than his disease.”

Ditto for Robyn and Ben Ferguson of Chicago, married 42 years in 2012 when they learned that Ben, a psychologist, had Alzheimer’s disease. “The diagnosis was crushing,” said his wife, who is also a psychologist. “Telling people in the program about it helped us recognize the impact on our lives and relationship and really face that. It made things feel not quite so bad.”

The Fergusons have publicly presented their 20-minute story together 19 times so far, helping to enlighten medical students and those training in social work and pastoral care, as well as researchers and members of the general public. “It reinforces our relationship as a couple, rather than caregiver and patient, even though he is 85 percent dependent on me for the activities of daily living.”

Dr. Ben Ferguson, now 69, said, “I feel we’re giving people information that could be very valuable in their future. It’s helpful to them to see us smile, have a good time and give a good report – as well as a bad report – about what goes on with this disease. It’s helpful for people to hear it from someone who has it, and it’s helped us avoid getting so morose.”

As for their presentations, which they now give almost monthly, his wife said, “They help us stay positive and give us a sense of purpose. We both feel a real need to do advocacy work, and this is the best thing we can do right now. We know there’s a sell-by date on this – we won’t be able to do it forever. But we don’t think about that now. Now we’re focused on helping people understand that your life doesn’t stop with the diagnosis. We want people to hear that you go on with your life, even though you may need a lot of help.”

Another workshop participant, Sheila Nicholes, 76, of Chicago, said of her husband, Luther, who has vascular dementia, that the storytelling “brings him back to being funny again. Writing our story together gave us a way to talk about these things, to think about where we were then and where we are now.”

Noting that dementia is “a very hush-hush illness in our black community,” Ms. Nicholes said she hoped that telling their story would help others speak more openly about it and learn to “just roll with the flow.”

The storytelling workshop, which started in January of 2014, was the brainchild of Lauren Dowden, then an intern in social work at Northwestern’s Cognitive, Neurological and Alzheimer’s Disease Center. She quickly learned from family members in a support group that “their concerns were not being addressed about dealing with loss, not just of memory, jobs and independence, but also what they shared as a couple.”

During the group sessions, Ms. Dowden said, “there’s so much laughter in the room, so much joy and love of life as well as poignancy and tears. As they move forward, as the disease progresses, they can be reminded of who they are, their strength and resilience, what has made their relationship strong, what they loved about the person, as opposed to just being patient and caregiver.”

As the program moves week to week, Ms. Dowden said, “there’s more touching, affection, looking at one another and laughing. There are delightful moments of connection when one member of a couple reveals something the other didn’t know.”

The weekly story assignments require that the couple collaborates, “and they learn how to work together in new ways, how to make adjustments, because they’ll have to make thousands and thousands of adjustments throughout the course of the disease.”

In executing the workshop assignments, Dr. Ferguson said she would ask her husband questions, he would answer and she would write down what he said. “The workshop was really transformative,” she said. “It gave us hope for our future together in dealing with this disease.”

Ms. Dowden said the feedback from those in the audience for the 20-minute joint stories has been heartening. She explained, “Students learn about the biology of neurodegenerative conditions. These stories enable them to see the human side of the disease, what it’s like to live with it, and may help them develop programs that help these families live better. In addition to the stigma, there’s a tendency to write off people with dementia.”

Ms. Dowden said she is currently refining the workshop curriculum so that it can be used as a model for other institutions to replicate. She is also expanding it to include mother-daughter and sibling pairs.

She realizes, of course, that a storytelling workshop may not be suitable for every couple. “It’s not good if there’s a lot of behavioral issues, a lot of conflict, and no insight,” she said. “But for those it does fit, it’s an opportunity to tap into the core of relationships, to still grow and learn and be delighted by one another.”