The Rev. Jose Luis Garayoa survived typhoid fever, malaria, a kidnapping and the Ebola crisis as a missionary in Sierra Leone, only to die of covid-19 after tending to the people of his Texas church who were sick from the virus and the grieving family members of those who died.

Garayoa, 68, who served at El Paso’s Little Flower Catholic Church, was one of three priests living in the local home of the Roman Catholic Order of the Augustinian Recollects who contracted the disease. Garayoa died two days before Thanksgiving.

Garayoa was aware of the dangers of covid, but he could not refuse a congregant who sought comfort and prayers when that person or a loved one fought the disease, according to retired hairstylist Maria Luisa Placencia, one of the priest’s parishioners.

“He could not see someone suffering or worried about a child or a parent and not want to pray with them and show compassion,” Placencia said.

Garayoa’s death underscores the personal risks taken by spiritual leaders who comfort the sick and their families, give last rites or conduct funerals for people who have died of covid. Many also face challenges in leading congregations that are divided over the seriousness of the pandemic.

Ministering to the ill or dying is a major role of spiritual leaders in all religions. Susan Dunlap, a divinity professor at Duke University, said covid creates an even greater feeling of obligation for clergy, because many patients are isolated from family members, she said.

People near death often want to interact with God or make things right, Dunlap said, and a clergy member “can help facilitate that.”

Such spiritual work is key to the work of hospital chaplains, but it can expose them to virus being spread in the air or sometimes through touch. Jayne Barnes, a chaplain at the Billings Clinic in Montana, said she tries to avoid physical contact with covid patients, but it can be difficult to resist a brief touch, which is often the best way to convey compassion.

“It’s almost an awkward moment when you see a patient in distress, but you know you shouldn’t hold their hand or give them a hug,” Barnes said. “But that doesn’t mean that we can’t be there for them. These are people who cannot have visitors, and they have a lot they want to say. Sometimes they are angry with God, and they let me know about that. I’m there to listen.”

Still, there are times, Barnes said, that the despair is so profound she cannot help but “put on a glove and hold a patient’s hand.”

Barnes was diagnosed with covid near Thanksgiving. She has recovered and has a “better understanding” of what patients are enduring.

Dealing with so much suffering affects even the most hardened doctors and nurses, she said. Billings Clinic staffers were devastated when a beloved physician died of covid, and rallied behind a popular nurse who was seriously ill but recovered.

“We’re not only taking care of the patients; we are also there for the staff, and I think we have been an important asset,’’ she said of the hospital’s chaplains.

In Abington, Pennsylvania, Pastor Marshall Mitchell of Salem Baptist Church said he believes part of his spiritual duty is to persuade his congregation and the broader African American community to take precautions to avoid covid. That is why Mitchell allowed photographers to capture the moment in December when he received his first dose of a vaccine.

“As pastor of one of the largest churches in the Philadelphia region, it is incumbent on me to demonstrate the powers of both science and faith,” he said.

Mitchell said he might have credibility in convincing other African Americans, who have been disproportionately affected by covid, that a vaccine can save lives. Many are skeptical.

The politicization of covid precautions such as masks and social distancing has put many pastors in a difficult position.

Mitchell said he has no patience for people who refuse to wear masks.

“I keep them the hell away from me,” he said. 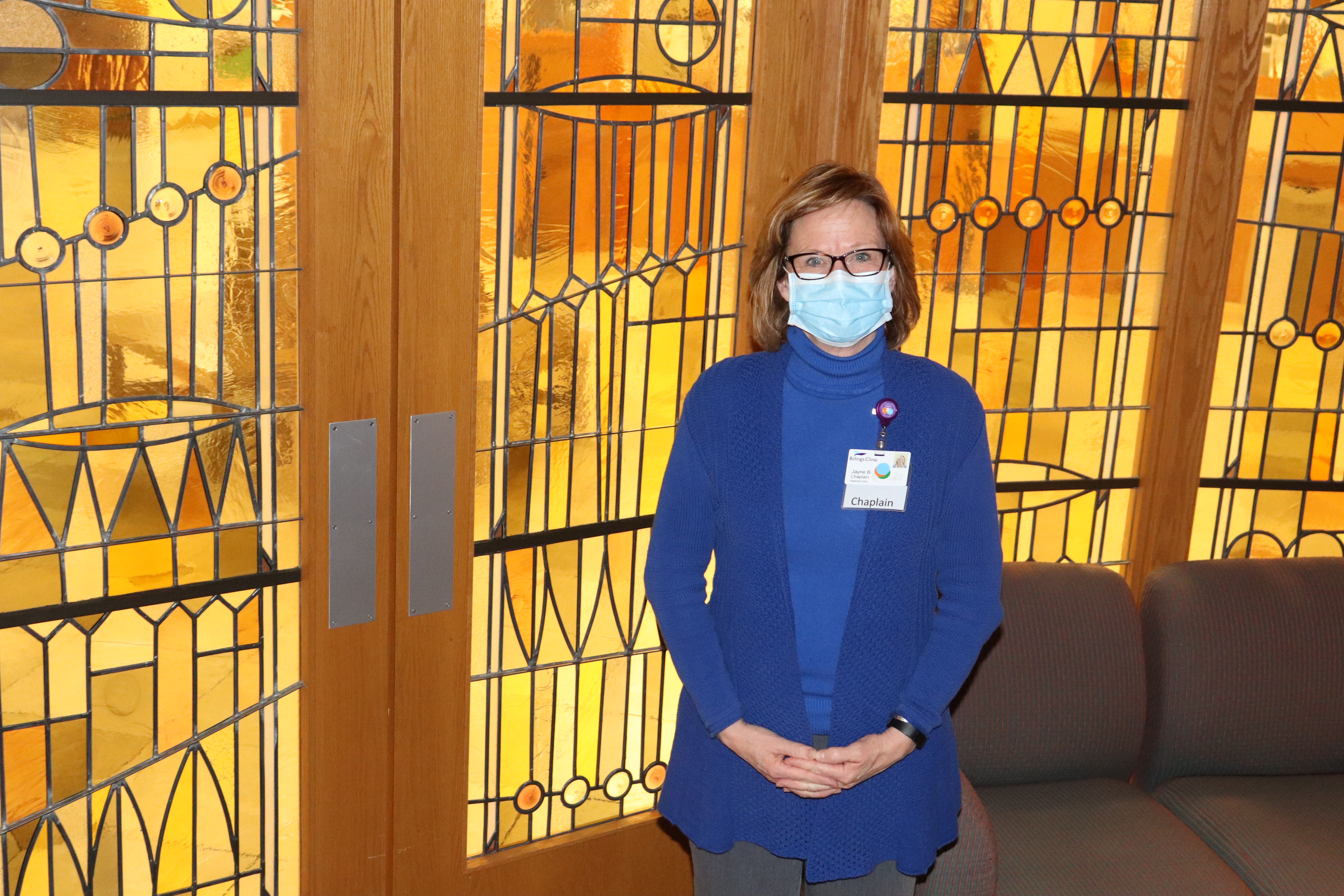 Jayne Barnes, a chaplain at the Billings Clinic in Montana, says it’s awkward not to touch or hug a covid patient in distress. But sometimes she cannot help but “put on a glove and hold a patient’s hand.” (Zach Benoit)

Jeff Wheeler, lead pastor of Central Church in Sioux Falls, South Dakota, said that his church encourages mask-wearing and that most congregants comply. However, the underlying tension is reflected in his message to members on the church’s website:

“As we move forward, we simply ask you to avoid shaming, judging or making critical comments to those wearing or not wearing masks,” it reads.

Sheikh Tarik Ata, who leads the Orange County Islamic Foundation in California, said that the Quran calls for Muslims to take actions to ensure their health and that congregants largely comply with covid guidelines

“So, our members don’t have a problem with mask mandates,” he said.

Covid has hit the Orange County Muslim population hard, Ata said. Religion has become an important source of comfort for members who have lost their jobs and struggled with illness or finding child care.

“Our faith says that no matter how difficult the situation, we always have access to God and the future will be better,” Ata said.

Adam Morris, the rabbi at Temple Micah in Denver, said he has turned to online video to meet with congregants sick with the coronavirus. When meeting with his congregation members in person, such as during graveside services, he worries that with his mask on people might miss seeing the concern and compassion he feels for their plight.

He conducts in-person graveside funerals for a small number of mourners but requires all participants to wear masks.

Observant Muslims and Jews believe it is important to bury the dead quickly after death, Morris said.

“Some traditions and rituals must go forward,” Morris said, “covid or not.”