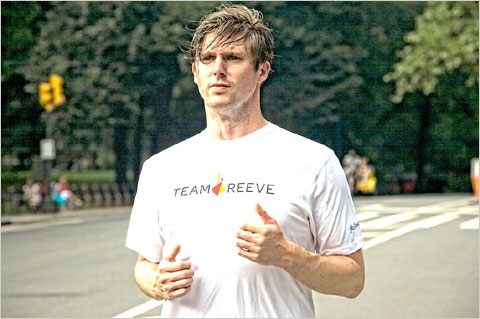 Matthew Reeve was 15 and had just finished coursework at his London school when his phone rang at 6 a.m. It’s a vivid memory because it was the moment he learned his father, the movie star Christopher Reeve, had been seriously injured in an equestrian accident.

Today Matthew, 29, is a graduate of Brown University who has produced and directed documentary films and will begin graduate school at New York University in the fall. He has organized various events and appearances for the Christopher and Dana Reeve Foundation, which supports programs and research for spinal cord injury. But this fall, just after the five year anniversary of his father’s death, he has decided to honor his father’s efforts in a more personal way – by running the New York City marathon, his first, in hopes of raising money for spinal cord injury research.

I recently spoke to Mr. Reeve about the marathon training, fundraising efforts and memories of his own father’s struggle with the American health care system. Here’s our conversation.

Have you always been a runner?

Not at all. I’ve been active and worked out, enjoyed a lot of water sports and things like that. But I was not a runner specifically, I really quite loathed it.

So why start running now?

I’m constantly grateful and appreciative of being able to do the simplest, most basic functions, and the fact that I have good health and can move normally. That’s something I’ve been more aware of and grateful for since the age of 15 than most people. There is a sense of, well, I can and I should.

I saw an opportunity to directly raise money by being involved with Team Reeve and running for the foundation. It coincided with learning about a new report that found the number of people living with paralysis and spinal cord injury was greater than anyone previously thought or imagined. To find out the scope of what you’ve been working on is far greater than you thought gave me extra motivation to raise funds directly. My uncle ran in the New York marathon a few years ago and managed to raise $26,000. My ultimate dream would be $10,000 a mile. That’s the moonshot number. But even to raise $1,000 a mile is very motivating.

You just finished the New York City Half-Marathon. How was it?

It was my first official race. It was ridiculously hot, and I learned a lot. I finished in a not terrible time (2:16). It was great to run through the city streets and get a taste of what it’s like to run with others around you and cheering you on. To run down 7th Avenue and Times Square was just brilliant. It also drove home how much farther I have to go before the real marathon. I really need to step up my training. Mile 10 and 11 – I was really struggling.

Why pick a marathon as a way to raise funds for spinal cord research?

There are a lot of other things I do to organize events. But this is the way I can directly raise a certain amount of money through hard work and effort that will hopefully fund a couple quality-of-life programs or a few scientific experiments. When my father was alive and we’d go to hospitals and rehab centers, and in the years I’ve been more actively involved in the foundation, I met a lot of people in wheelchairs.

During the half-marathon I saw a double amputee, a blind gentleman – anyone who is overcoming incredible obstacles to achieve these impressive feats of endurance and athleticism is awe inspiring. When I’m running I think of a guy, Jesse Billauer, who was injured and paralyzed in a surfing accident at 16. He still surfs and founded the Life Rolls On Foundation. It’s hard not to be inspired by someone like that. Or you see a paralyzed child, and there’s nothing more wrong than a child not to be able to move. It’s incredibly motivating.

Right now the country is debating health insurance reform. What was your father’s experience with insurance and medical care?

We were extremely fortunate that my father had adequate health insurance and a fair degree of resources to be able to afford nursing care. A lot of insurance companies will deny this claim for families of people with spinal cord injury. More often than not the wives and children become caretakers. We were always very grateful at how we were able to unite as a family and how fortunate we were that we didn’t have to go through some of the hardships that most people do. But I know my dad still had an incredibly difficult time with insurance. They would more often than not automatically deny a claim. He was a ventilated quadriplegic – it’s a machine that could break. His doctors told him he should have a back up ventilator in case the other one goes down. That was denied. They thought he shouldn’t have 24-hour nursing care. He basically always had to fight the insurance company. I do remember it wasn’t easy.