Denver Broncos quarterback Jay Cutler has been diagnosed with Type 1 diabetes, news that will likely raise awareness about the unique challenges faced by athletes with the disease. 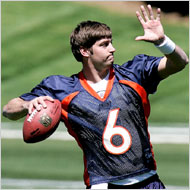 Type 1 diabetes is typically diagnosed in children but can emerge well into adulthood. Mr. Cutler is 25. Type 1 diabetes is an autoimmune disease, in which the body’s immune system destroys cells that make the hormone insulin. People with Type 1 disease must monitor their blood sugar and food intake and take insulin injections. Type 2 diabetes, the more common form of the disease, typically develops later in life and often can be controlled by dietary changes alone.

Although exercise often is prescribed as a way to manage Type 2 diabetes, athletes with Type 1 face special challenges. In people with Type 1, exercise can cause blood-sugar levels to drop precipitously. Therefore, exercise, food intake and insulin injections must be carefully monitored and balanced.

New technology has made it easier for athletes with diabetes to stay on the field without having to think constantly about the disease. Continuous glucose monitors can track blood sugar and sound alarms if it goes outside of safe ranges. Wireless insulin pumps can deliver insulin as needed without a tangle of tubes and wires.

Mr. Cutler, 25, was diagnosed about two weeks ago and learned he needed daily insulin injections, his business manager Marty Garafalo told The Associated Press. Mr. Garafalo said the quarterback is managing his disease and “in no way is his football career jeopardized.”

Last week a professional cycling team called Team Type 1 placed third among teams in the Tour de Georgia, a major United States cycling race. Four of the 15 riders on the Team Type 1 professional squad — co-founders Phil Southerland and Joe Eldridge, as well as Tim Hargrave and Fabio Calabria — have Type 1 diabetes, although only Mr. Calabria rode in the race.

Last year, The Times wrote about athletes with Type 1 in an article called “Diabetic and Determined.” To read it, click here.