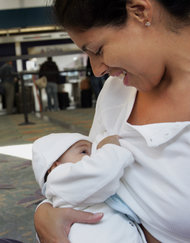 Breast-fed babies have healthier immune systems, score higher on I.Q. tests and may be less prone to obesity than other babies.

Now new research reveals another possible difference in breast-fed babies: They may have longer telomeres.

Telomeres are stretches of DNA that cap the ends of chromosomes and protect the genes from damage. They’re often compared to the plastic tips at the end of shoelaces that prevent laces from unraveling. Telomeres shorten as cells divide and as people age, and shorter telomeres in adulthood are associated with chronic diseases like diabetes. Some studies have linked longer telomeres to longevity.

The new study, published in The American Journal of Clinical Nutrition, is a hopeful one, its authors say, because it suggests telomere length in early life may be malleable. The researchers, who have been following a group of children since birth, measured the telomeres of 4- and 5-year-olds, and discovered that children who consumed only breast milk for the first four to six weeks of life had significantly longer telomeres than those who were given formula, juices, teas or sugar water.

Drinking fruit juice every day during the toddler years and a lot of soda at age 4 was also associated with short telomeres.

Socioeconomic differences among mothers can muddy findings about breast-feeding because the practice is more common among more educated mothers. However, this group of children was fairly homogeneous. All of them were born in San Francisco to low-income Latina mothers, most of whom qualified for a government food program.

“This adds to the burgeoning evidence that when we make it easier for mothers to breast-feed, we make mothers and babies healthier,” said Dr. Alison M. Stuebe, an expert on breast-feeding who is the medical director of lactation services at UNC Health Care in Chapel Hill, N.C., and was not involved in the study. “The more we learn about breast milk, the more it’s clear it is pretty awesome and does a lot of cool stuff.”

The study did not establish whether or not breast-feeding enhanced telomere length. It may be that babies born with longer telomeres are more likely to succeed at breast-feeding. A major drawback of the research was that telomere length was only measured at one point in time, when the children were 4 or 5 years old. There was no data on telomere length at birth or during the first few months of life.

“We don’t have a baseline to see if these kids were different when they came out,” Dr. Stuebe said. “It could be that really healthy babies can latch on and feed well, and they already had longer telomeres. It could be successful breast-feeding is a sign of a more robust kid.”

The researchers were following children who were part of the Hispanic Eating and Nutrition study, a group of 201 babies born in San Francisco to Latina mothers recruited in 2006 and 2007 while they were still pregnant. The goal of the research was to see how early life experiences, eating habits and environment influence growth and the development of cardiac and metabolic diseases as children grow.

Researchers measured the babies’ weight and height when the children were born. At four to six weeks of age, they gathered detailed information about feeding practices, including whether the baby had breast milk and for how long, and whether other milk substitutes were used, such as formula, sugar-sweetened beverages, juices, flavored milks and waters. Information was also gathered about the mothers.

Children were considered to have been exclusively breast-fed at 4 to 6 weeks of age if they received nothing but breast milk, as well as medicine or vitamins.

When the children were 4 and 5 years old, researchers took blood spot samples that could be used to measure the telomeres in leukocytes, which are white blood cells, from 121 children. They found that children who were being exclusively breast-fed at 4 to 6 weeks of age had telomeres that were about 5 percent longer, or approximately 350 base pairs longer, than children who were not.

The new findings may help explain the trove of benefits that accrue from breast-feeding, said Janet M. Wojcicki, an associate professor of pediatrics and epidemiology at the University of California, San Francisco, and the paper’s lead author.

“What’s remarkable about breast-feeding is its ability to improve health across organ systems,” Dr. Wojcicki said. “Telomere biology is so central to the processes of aging, human health and disease, and may be the link to how breast-feeding impacts human health on so many levels.”

There are several possible explanations for the correlation between breast-feeding and longer telomeres. Breast milk contains anti-inflammatory compounds, which may confer a protective effect on telomeres. It’s also possible that parents who exclusively breast-feed their babies are more scrupulous about a healthy diet generally.

Yet another possibility is that breast-feeding is a proxy for the quality of mother-child attachment and bonding, said Dr. Pathik D. Wadhwa, who was not involved in the research but studies early-life determinants of health at the University of California, Irvine School of Medicine. “We know from studies looking at telomere length changes in babies who came from orphanages that the quality of the attachment and interaction, and more generally the quality of care that babies receive, plays a role in the rate of change in telomere length,” he said.

When children are exposed to adversity, neglect or violence at an early age, “psychological stress creates a biochemical environment of elevated free radicals, inflammation and stress hormones that can be harmful to telomeres,” said Elissa Epel, one of the authors of the study who is a professor at the University of California, San Francisco, and director of the Aging, Metabolism and Emotions Lab.

“The idea that breast-feeding may be protective for telomeres is heartening because we don’t know much about what’s going to help protect them in children, besides avoiding toxic stress. And boy, do we want to know,” Dr. Epel said.

Although genes can’t be changed, Dr. Epel said, “This is part of the genome that appears to be at least partly under personal control.”