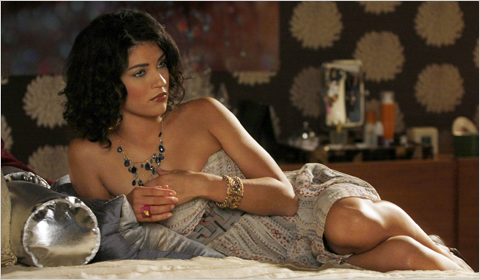 A new study making headlines today suggests teenage girls and boys who watch a lot of steamy television are more likely to become pregnant or cause a pregnancy.

But a closer look at the data shows the relationship between television, sexual content and teen pregnancies is complex. The same study, published today in Pediatrics, also found that teens who watch a lot of television in general are less likely to become pregnant.

How can that be? The answer may be that kids who watch a lot of television obviously aren’t out dating and socializing with friends. So as unhealthy as it may be to spend hours in front of a screen, the behavior appears to be oddly protective against teen pregnancy.

The study only shows an association between steamy TV and teen pregnancy, which means some other factor may be influencing the data. It could be that shows like “Gossip Girl” and “Degrassi High,” with their depictions of casual, consequence-free sex, prompt sexually active teens to have more partners or to be less careful about birth control. Or it may be that kids prone to risky or problem behavior also are more attracted to shows with high sexual content.

While the answer isn’t clear, the study findings do suggest that parents should be aware of what kids are watching on television and be ready to offer an alternate viewpoint.

“If the type of sexual portrayals that teens see on TV are the only messages they’re getting about sex, then they’re likely to approach sexual relationships in a way that might not be the healthiest way,” said Steven Martino, study co-author and a behavioral scientist at the RAND Corporation, the nonprofit health care research firm that conducted the study. “It’s important to talk to them about that and see how they’re reacting, and offer other perspectives to them about sex that they might not be getting on television.”