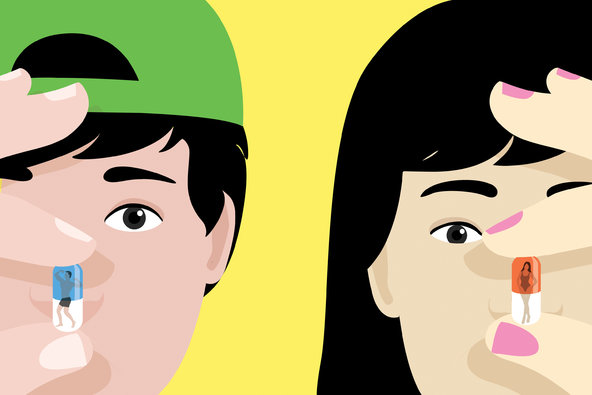 The universal truth of puberty and adolescence is body change, and relatively rapid body change. Teenagers have to cope with all kinds of comparisons, with their peers, with the childhood bodies they leave behind, and with the altered images used in advertising and in the self-advertising on social media.

It may be that the rapid way the body changes during these years can help adolescents believe in other kinds of change, including the false promises that various products can significantly modify their size and shape. A study published last month in the journal Pediatrics looked at two kinds of risky behavior that are increasingly common over adolescence: the use of laxatives for weight loss and the use of muscle-building products.

It used data from an ongoing study of more than 13,000 American children, the Growing Up Today Study (GUTS). The participants’ mothers took part in the Nurses’ Health Study II, and the children were recruited in 1996, when they were 9 to 14 years old, and surveyed about a variety of topics as they grew up.

By age 23 to 25, 10.5 percent of the women in this large sample reported using laxatives in the past year to lose weight; the practice increased over adolescence in the girls, but was virtually absent among the boys. Conversely, by young adulthood, about 12 percent of the men reported use of a muscle-building product in the past year, and again, this increased during adolescence.

So a lot of young women are taking laxatives to try to become very thin, and a lot of young men are using products to help them bulk up and become more muscular. The researchers were interested in how these practices were associated with traditional ideas of masculinity and femininity. They found that, regardless of sexual orientation, kids who described themselves as more gender conforming were more likely to use laxatives (the girls) or muscle-building products (the boys).

“The link is the perception that they are going to alter your weight, shape, appearance,” said Rachel Rodgers, a counseling psychology researcher who studies body image and eating concerns and is an associate professor of applied psychology at Northeastern University.

“The representations of ideal appearance in society are very restrictive and very unrealistic both for men and for women,” she said. “They portray bodies that are unattainable by healthy means.”

Jerel Calzo, a developmental psychologist who is an assistant professor at Harvard Medical School, and the lead author on the study, said that one important aspect of this research was the way it highlighted the vulnerability of those who identify with traditional gender ideals.

“Usually in research we tend to focus on youth who are nonconforming, who we might focus on as more at risk for negative health outcomes, depression, who might be ostracized or victimized,” he said. But there are risks as well for those who are trying to measure up to what they see as the conventional standard.

The GUTS participants were asked to describe themselves as children in terms of the games they liked and the movie and TV characters they imitated, and this was used to score them as more or less “gender conforming.”

Chronic use of laxatives can affect the motility of the bowel so that it can be hard to do without them, and overdoses can alter the body’s balance of electrolytes, to a really dangerous extent.

“There’s a lot of shame and guilt for laxative abuse,” said Sara Forman, an adolescent medicine specialist who is the director of the outpatient eating disorders program at Boston Children’s Hospital. And many products marketed as cleanses or herbal teas are not labeled as laxatives, though they contain strong laxative ingredients.

The muscle-building products in the study included steroids, creatine and several others. The risks of steroids are well known, from hormonal imbalances and shrinking testicles to acne and aggression. With other commercial muscle-building products, the risks may have more to do with the lack of regulation, Dr. Calzo said. The products can contain banned substances or analogues of banned substances, like the amphetamine analogue found in popular diet and workout supplements last year.

And of course, the muscle-building products won’t reshape you into the photoshopped model any more than the laxatives will.

As Dr. Calzo says, we need to worry about the vulnerabilities of children who are growing up with issues of gender identity and sexuality. But don’t assume that more “mainstream” or “conforming” kids have it easy when it comes to body image. Parents can help by keeping the lines of communication open and starting these conversations when children are young. We should be talking about the images that our children see, about how real people look and how images are altered.

And that conversation should extend to social media as well; in a review by Dr. Rodgers, increased social media use was correlated with body image worries. “Teenagers are looking at their friends on social media and seeing photos that have been modified and viewing them as something real.”

The other message for parents is about helping to model healthy eating, family meals, realistic moderation around eating and exercising, and to refrain from any kind of negative comments or teasing about a child’s body. “Research has shown people who have more body satisfaction actually take care of themselves better, which suggests that the approach of making them feel bad is actually not helpful,” Dr. Rodgers said.

Every adolescent, across gender, gender identity, gender conformity, and sexuality, lives with a changing body and the need to navigate body image and identity. There are a lot of unrealistic images out there to measure yourself against, and a lot of false promises about how you might get there.