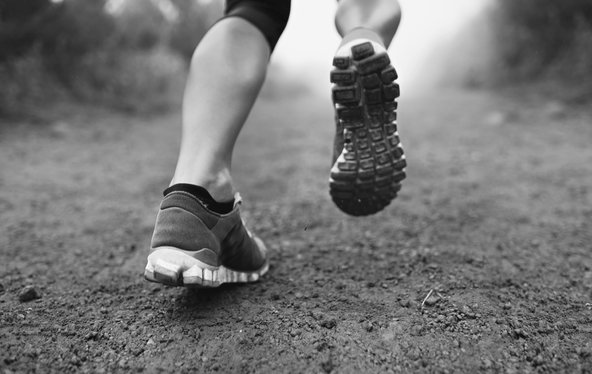 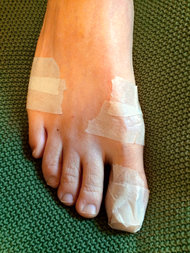 Paper tape, the kind you can find in a first-aid kit, can help prevent blisters.Credit Grant S. Lipman, M.D.

Exercise science today is exploring countless mysterious, exciting and poetic aspects of human physiology and performance. But sometimes you just wish that someone would tell you how to keep your feet from hurting. A wonderfully practical new study obliges, providing the first reliable, field-tested evidence about how to prevent blisters during prolonged exercise. Anyone running next week’s Boston Marathon, you’re welcome.

Blisters are one of the most common bugaboos of physical activity. Almost everyone who regularly trains or competes in any sport has experienced blisters. They reportedly afflict about 40 percent or more of marathon runners and frequently cause racers to drop out of the event.

“Blisters happen to just about everyone,” said Dr. Grant S. Lipman, a clinical associate professor of medicine at Stanford University, who led the new study.

Blisters develop when something rubs repeatedly against a patch of skin. The resulting friction causes the top layers of the skin to begin separating from one another, producing a feeling of heat. This is a hot spot, a warning sign of an incipient blister. If the friction continues, fluid fills the spaces between the skin layers, and you have a blister.

Blisters hurt, as most of us know from experience. So active people have tried many methods to avoid them. Past studies in the small field of blister science have found that, by and large, none of these methods work. Applying petroleum jelly to the feet, for instance, increases friction and the incidence of blisters, according to a 1995 study. Ditto for wearing cotton socks, using lotion combined with antiperspirant, or sticking a bandage, Moleskin or other specialized protective patch onto the foot.

But Dr. Lipman, who is the director of the Wilderness Medicine program at Stanford and the medical director for several ultramarathons around the world, had heard from ultramarathon runners that wrapping parts of their feet in paper tape helped them to stave off blisters.

Paper tape is exactly what its name suggests, a thin, inexpensive tape made of paper. You can find it at virtually any drugstore, sold as surgical or medical tape, and it is a common component of first-aid kits. It is thinner than bandages, and breathable.

But anecdotes from happy racers do not constitute scientific evidence, Dr. Lipman knew.

So for the new study, which was published this week in the Clinical Journal of Sport Medicine, he turned to a group for whom blisters are almost inevitable: ultra-ultramarathoners and, specifically, the participants in an annual, grueling multistage ultramarathon run across parts of Jordan, Madagascar and the Gobi and Atacama deserts.

Dr. Lipman and his colleagues asked all of the runners signed up for the 2014 event if they would wear paper tape on their feet to determine if doing so actually prevented blisters. Almost 130 men and women agreed.

Immediately before the first stage began, those racers visited Dr. Lipman’s medical tent and had their feet wrapped. Runners with a history of blisters, which was most of the runners, showed the researchers where they had been prone to develop the sores in the past. Those areas — usually the toes — were then covered with the thin tape. If someone had not experienced blisters before, the researchers wrapped parts of their feet at random.

The uncovered portions of each runner’s affected foot would serve as a control, the scientists had decided. If a runner developed no blisters or blisters only where his or her foot had remained unprotected, then the tape could be considered to have worked.

Six stages and more than 200 miles later, most of the runners had developed at least one blister. But an overwhelming majority of those blisters, about 70 percent, had occurred on the unprotected parts of the foot. Very few blisters had developed beneath the tape.

Over all, the scientists concluded, the tape had reduced the incidence of blisters by at least 40 percent, a very “robust effect,” they wrote.

But there were quibbles. Paper tape is not very sticky and typically will peel away as feet sweat. Most runners had to reapply the tape multiple times throughout the race stages, meaning they had to carry a roll with them, stop, uncover their feet, retape and resume running. Whether participants in shorter, single-stage events, such as a marathon, would need to retape their feet is not known

(On the plus side, Dr. Lipman said, paper tape won’t stick to a blister and tear away skin or tissue when removed, as bandages will.)

Most of the racers involved in the study, however, said afterward that they planned to use the tape in future events, Dr. Lipman said.

For those at home considering likewise taping their feet to avoid blisters, the process is simple, he said. Cut or tear a single narrow strip of the paper tape and wrap it over whichever part of your foot has been prone to blisters. (See photo.) For most people, the toes and ankle are the spots most vulnerable to blisters.

Also, he said, use common sense. Make sure that your shoes fit and don’t rub against your skin. Never wear brand-new shoes in a race, as you won’t know whether they rub. And don’t wear cotton socks or coat your feet in petroleum jelly.