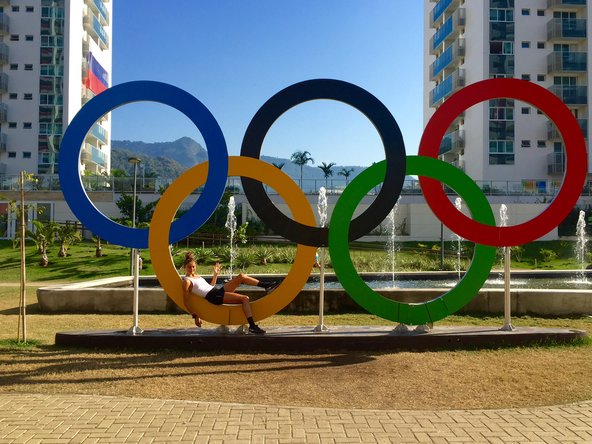 I’ve just landed home after nearly a month living in the Olympic Athlete Village in Rio. At the airport, I even tried to use my athlete credential instead of my passport to check into my flight. A shift back to the real world will start for me now. But before too many of my memories fade, I thought I’d share a glimpse of life — the athletes, the food, the condoms — from the Olympic Village.

Hall Pass
When I arrived at the Village, I was given a credential which is the most powerful hall pass ever. I could flash it at any venue and access the athlete locker room at any competition. I could also use it to get my hair done, visit the dentist, open the door to any vending machine, or get my laundry cleaned (all free) in the Village. I guarded this credential with my life, and now it is nothing more than a laminated plastic souvenir. 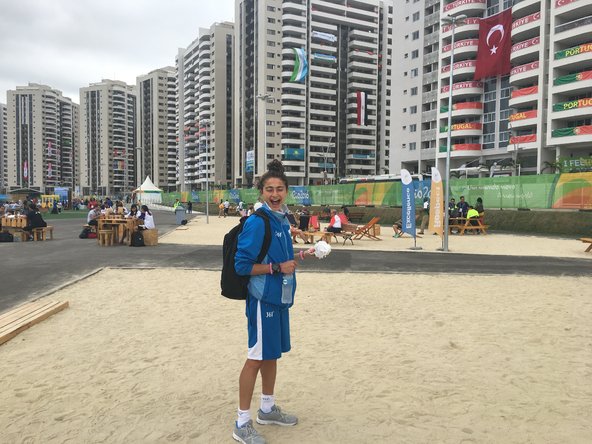 The Apartments
The Village is filled with a cascade of tall, newly balconied apartment buildings. Every building (except the Team USA building, which opts to be low-key) was dressed in country-specific flags — China, Qatar, Czech Republic. The Australian building even had life-size kangaroo and emu statues outside.

My Greek team and I shared a building with Croatia, Algeria and Ethiopia, among others. The Croatian staff could always be found in the lobby of our shared building smoking cigarettes and jovially watching the Games on television from beanbag chairs. House music thumped from the balconies above at all hours of the day and night. 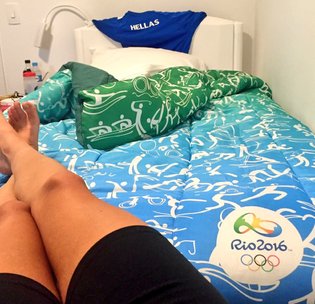 Every athlete gets to take home their limited edition Olympic bedspread.CreditCredit Alexi Pappas

I had four suite-mates and one roommate. My room was small, dressed in IKEA head to toe, but I turned it into my home. At the end of the Games every athlete took their custom Rio Olympics bed comforter with them — mine took up half a suitcase.

The Daily Uniform
All athletes wore their team sweatsuits at all times — this was a requirement enforced by each national team’s mission chief. The Italians’ were Armani. France, Lacoste. Sweden, H&M. The Slovakians’ sweats had colorful squiggly circles and squares printed on them that may or may not have been designed by Lisa Frank. My sweats were mostly Mediterranean blue. I even got a Greek fanny pack. My favorite item was my rain jacket, blue with tiny white Greek-keys printed all over it. By the end of the Games, the smell of bug spray was permanently infused in its fabric. 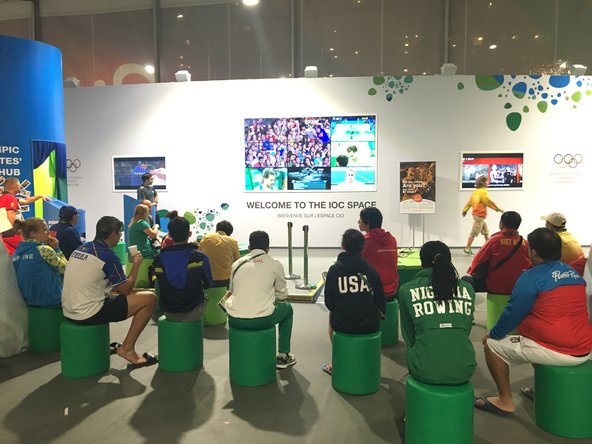 Security
At every corner, the Village was patrolled by camouflaged gunmen. When I waved at them they would smile and wave back. I got used to guns, as they were everywhere.

I would leave the Village most days to train, compete or watch other competitions. Each time I came home from the outside world I had to get my credential scanned, my photo checked against my face, and my belongings scanned in a bomb detector. The security line was a great place to trade pins and make friends with fellow athletes returning home from their Olympic adventures.

Visitors
Only athletes and those with specially marked credentials were allowed in the Village. Each country was allowed 12 visitors per day, who were only permitted in the Village from 9 a.m. to 9 p.m. — their passports were held to make sure they left before bedtime. I invited my coach to visit one day and deliver a special ice vest for my race. I also got the chance to show my entire family the Village, and they spent two hours people-watching in the dining hall where an athlete from Djibouti asked my brother for pointers on how to use chopsticks.

Buses
There were buses that circulated the perimeter of the Village at all hours, but the easiest way to get anywhere was to walk. Plus, if I didn’t walk to and from the dining hall every day, I wouldn’t have gotten an epic photo with Usain Bolt. 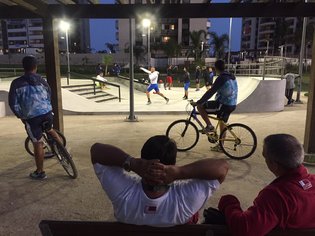 Several delegations brought collapsible bikes to help their athletes get around the Olympic village.Credit Alexi Pappas

Bicycles
Many of the European delegations, as well as Canada, brought small collapsible bikes to scoot around the Village campus. It was important to watch out for mini pelotons of bikers whizzing across the walkways.

The Epic Dining Hall
I spent a lot of time in the dining hall, a colossal temporary white structure that resembled a holiday cake roll. Inside, I found tubs of quail eggs, halved passion fruit and other worldly prepared foods and condiments. I learned the hard way that the giant bucket of yellowish stuff next to the cold cuts was not honey mustard, it was dulce de leche. This dining hall never closed, and it was the best place to people watch.

In the dining hall, I saw team jackets from every possible country — Sri Lanka, Kyrgyzstan, Nigeria, Dominican Republic, Lesotho, Morocco, Nigeria, Croatia, Japan, South Korea, Ecuador, Myanmar — everyone in their specific colors, like a Wes Anderson film. Even though I often ventured to the dining hall alone, I always managed to find someone to meet and eat with. One day, I sat with Katie Ledecky, who liked to eat lots of bacon. I later watched in awe as she won several gold medals. 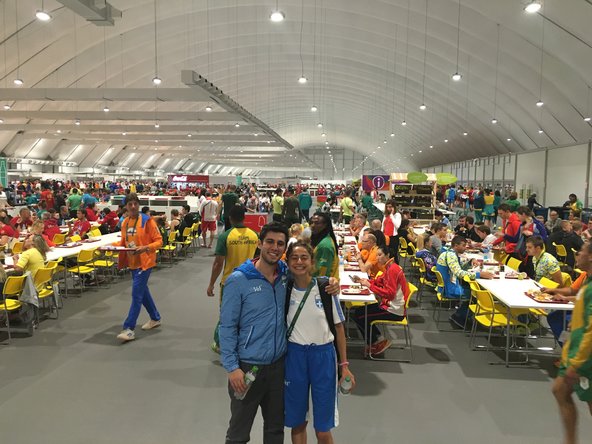 The Olympic athletes’ dining hall is expansive and the best place in the Village to people watch.Credit Alexi Pappas

Meeting Other Athletes
I loved guessing an athlete’s sport by looking at them. I loved learning about their sport even more— I met a Cuban who told me about that his event — doubles canoeing — is being phased out of the Olympics next year, which means he won’t be back (unless he becomes very good at a different event).

I got the courage to ask Venus Williams for a photograph. Her hair was dyed USA-red — I loved it.

No matter what country or sport, athletes can tell when other athletes needed their space. After all, today could be their big day. If they were carefully twirling their pasta noodles on a spoon, or seemed to be moving either very quickly or very slowly, that probably meant today was the biggest day of their life. When I saw Michael Phelps with his hood up and headphones in, I didn’t bother him. 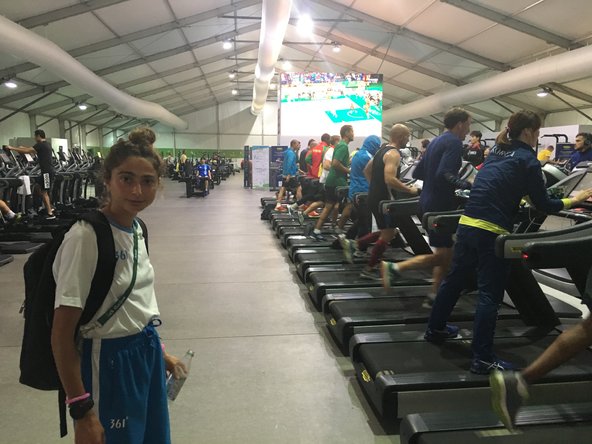 The Village gym looks like a normal gym, except for the range of body types and activities that fill it.Credit Alexi Pappas

The Gym
It was common to see a table tennis player, a rower, and a swimmer all bobbing up and down on the elliptical while watching Netflix. A gold medalist dropped his iPhone and it shot off the back of his moving treadmill. A table tennis game blasts on the floor-to-ceiling television – after a particularly intense point, every athlete in the gym stopped in his or her tracks, in collective awe at watching a fellow Olympian doing something completely foreign to them. The Village gym looks like a normal gym, except for the range of body types and activities that fill it. 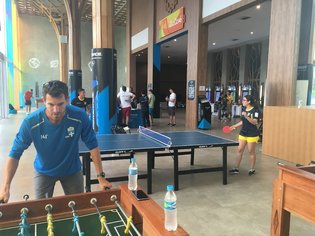 The Olympic game room is a place for athletes to relax, but it still gets pretty competitive.Credit Alexi Pappas

The Secret Athlete Game Lounge
When athletes are not competing in their sport, they might be found competing in traditional game room fare in the athlete game lounge. This building is somewhat hidden, but once you find it you have access to free condoms, Dance Dance Revolution, and all the limited edition athlete-only golden Coca-Cola bottles you can get your hands on.

But even when you remove an athlete from competition, you can’t take the competition out of them. When you challenge a Russian weightlifter to a game of ping pong (like my dad did), you will probably lose. Even though there is not a medal at stake here in the game lounge, it is nearly impossible for Olympic athletes not to try their best. It comes from the same immutable competitive instincts as my determination to always peel my oranges in a single peel. We can’t help it. 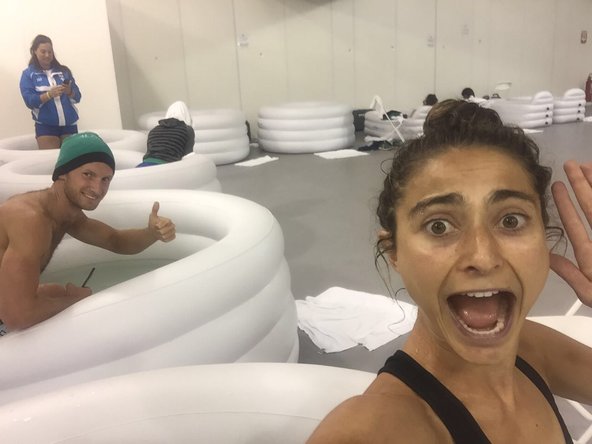 A good way to meet fellow Olympians is to share an ice bath.Credit Alexi Pappas

The Medical Tent
I visited the medical tent for an ice bath every day, and each time I shared a tub with someone from a different sport and different country than me.

While inquiring about the free dental exams, I met a volunteer doctor from Brooklyn named David. He called the International Olympic Committee every day for a year to get the chance to live and work for free in the village. He told me that the reason that doctor and dentist offices were so packed at all hours of the day is because for many athletes and coaches from less-developed parts of the world, this was the first doctor’s appointment they’ve had in four years — since the last Olympics.

Romance
In the Village, after the competition is done, things get fun.

The reason the condom machines never ran out was because there was a condom fairy who roamed around with a knapsack full of condoms with the sole purpose of keeping the condom dispensers stocked. The dispensers read “celebrate with a condom” in three different languages. 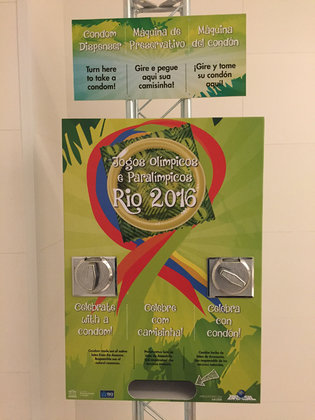 I often saw athletes wandering hand in hand at sunset along the shoestring of waterways that laced between the 20-odd residential buildings. Once it was dark, the parties began — often in the pool outside my building, and always well past my bedtime.

Morning walks of shame were not uncommon, with an athlete wearing mismatched country clothes scurrying across one of the walkways between the thousands of balconies and waving flags.

As a Greek, I entered the stadium first. I wondered if this is how Rihanna feels at her concerts? I tried not to cry, but every time I made eye contact with any person, I cried.

At the center of the stage, a smiling person dressed entirely in green approached me and offered me a small oval pellet: a tree seed. She guided my hand towards a cardboard planter box and I planted the tree right there on the stage. For a moment, I forgot about the thousands of people around me and just focused on the little seed. 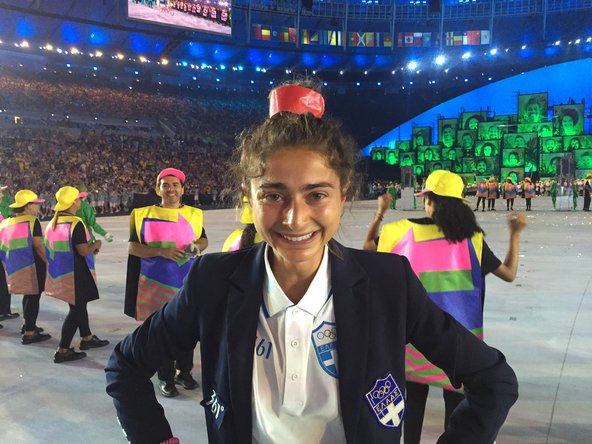 The opening and closing ceremonies are an exciting part of the Olympics for every athlete.Credit Alexi Pappas

Famous Last Words
When you leave the Village, “thank you” is not the word you use. Though you feel all sorts of emotions and gratitude for your experience, thank you is not enough. You won’t use traditional summer camp goodbye rituals — it’s not a teary goodbye. It’s not the time, either, to dwell on the ups and downs from this Olympics. This Olympics is over, forever sealed in a vault in our hearts and minds.