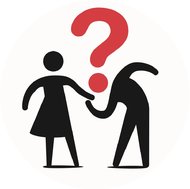 My girlfriend and I have been going out for six months. At about the three-month mark, she started raising the issue of dating exclusively. I really care for her, but I wasn’t ready for exclusivity. Still, I agreed. (I was a jerk!) Recently, I almost hooked up with a girl I met at yoga, and would have if she hadn’t backed out. (Now, I feel like even more of a jerk.) Please tell me how to handle this. I think I could be exclusive with my girlfriend in the future, but I’m not there yet.

Do you know the conceptual artist Jenny Holzer? (She’s amazing.) She places aphorisms like “Abuse of power comes as no surprise” in public spaces: on billboards, projected onto walls in lights and (my favorite) carved into stone cemetery benches. Out in the world, her words take on a power they probably wouldn’t have in an art gallery. I recently saw a bench that read: “There is a period when it is clear that you have gone wrong, but you continue. Sometimes there is a luxurious amount of time before anything bad happens.”

That is precisely where you are. Of course, it would have been better to be honest with your girlfriend. Exclusivity in dating should not feel like jail. But I empathize. I get how you might have agreed because you wanted to please her (or wished you were ready to commit). But as the artist said, “You have gone wrong.”

Talk to your girlfriend right away. Say: “I really care about you. But I agreed to exclusivity before I should have. I feel confined by it, and that’s not right. Is it possible for us to step back and keep dating, without that promise?” (Confessing your aborted hookup strikes me as needlessly provocative. It would be the only thing she hears, and it’s beside the point. Your premature agreement is the main issue.)

She may say no, and you may lose the girl. And your problem may be with commitment generally, not with her. But until you work that out, it isn’t fair to continue as you are, whether you dally on the side or white-knuckle-it-out, seeing only her in an arrangement that’s uncomfortable for you. There are no fixed timetables in relationships, and temptations often arise. But next time, don’t agree to anything until you are eager to give it your best shot.

Root of the Problem

I love doing genealogies, so people’s ancestry is of interest to me. But when I meet someone and ask “Where are you from?” they often look startled, particularly if they are ethnic. Am I being rude?

Have you read any other sections of the newspaper lately? I hear there is a heated new focus on immigration. Let me also object to your use of “ethnic.” We all have an ethnicity, even the whitest Anglo-Saxon you can find. Still, your question may be innocent. You may be asking everyone you meet, regardless of their appearance.

But at a time when national policy is veering in the direction of “guilty until proven innocent” for some groups, better to wait until you know these new folks better. By then, they will know all about your love of genealogy and that you know, thanks to your hobby, that we all come from someplace else.

No Room for Errors

My (same-sex) partner is 20 years older than I am. She is often mistaken for my mother. I try to introduce her with: “This is my partner, April.” But occasionally we’re introduced just by name or not at all. Often, people will say to me later: “Where’s your mother?” This leads to confusion on my part and embarrassment on theirs. Is there a way to correct them without causing further embarrassment or shock?

People make silly assumptions all the time. The best way to cut down on the number that I will make (in the future) is to point out my errors to me (in the present) in a “just the facts, ma’am” tone of voice. If clarifying the nature of your loving relationship causes people “embarrassment or shock,” that’s their problem, not yours. Don’t give it a second thought. Busting assumptions, one by one, you will be making the world a slightly better place.

A Date With the Handbook

My company has an employee handbook that prohibits managers from dating people we supervise. There are no exceptions, unlike some places that let employees date as long as they report the relationship to H.R. May I ask a woman I supervise out on a date, then go to H.R. if she says yes?

No. Get the rule changed first. It exists for a reason: the inherently unequal power dynamic. How could employees ever feel unfettered freedom to refuse the very people who review their performance and make salary, promotion and termination decisions about them? Still, I have heard of happy exceptions. But apparently, your company handbook has not. See to that before asking any employee whom you supervise on a date.

For help with your awkward situation, send a question to SocialQ@nytimes.com or SocialQ on Facebook. You can also address your queries on Twitter to @SocialQPhilip.

See Details ▼
Includes everything in Basic, plus:

Customized delivery options such as Sunday only, Fri.-Sun., weekday delivery, or daily delivery

*Home delivery price based on Sunday delivery.
Prices vary based on delivery location and frequency.