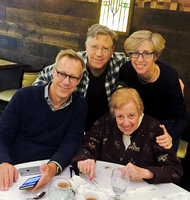 Steven Petrow (left) with his siblings, Jay and Julie, and mother, Margot Petrow, on her 84th birthday in February.Credit Caroline Petrow-Cohen

If anything about my mother was conventional, it was the smoking. Like many of her generation she smoked early and often, and I swear she waited to light up until we were hermetically sealed in our family’s Ford Country Squire. My brother, sister and I hated it — we tried over and over to get her to quit. She made some attempts: Patches and gum, even hypnosis by a Russian. She had some short-term successes, but soon enough I could smell the smoke on her breath or see the burnt-out butts hidden in her desk drawer ashtray.

The last time I begged Mom to quit, she shot back with a stern rebuke: “I very much appreciate your concern,” followed by an expletive. The message was clear: Mind my own business. Indeed, Mom has always been “spirited.”

From both ends, ours was not an easy relationship.

Four years ago, at 80, Mom wound up in the emergency room after she passed out in bed; her carotid artery was 90 percent blocked. The doctor ordered a routine pre-op chest X-ray and found a mass that turned out to be lung cancer. “Did my smoking have anything to do with this?” Mom asked the handsome cancer surgeon, almost flirtatiously. “Yes,” he told her. “Then I’ll quit,” she said. And that, finally, made her stop, once and for all.

A few weeks later “Dr. Handsome,” as the family began referring to him, took out part of her left lung at the very same New York cancer hospital where I’d had cancer surgery three decades before. I’d wound up there only because Mom had insisted that I get a second opinion after my first operation, an orchiectomy to remove my cancerous testicle, at a hospital on the opposite coast. While I’d been overjoyed when the oncologist told me I was a candidate for “watchful waiting” and that he’d “never lost a patient,” Mom thought the latter comment quite odd for a doctor who treated cancer patients. I caved, flew east, and learned I needed more treatment, stat. Score one for Mom.

During Mom’s first hospitalization for her cancer our roles flipped. I became her caregiver, and she became my charge. With nurses busy elsewhere, I made sure her bedpan got changed, or contacted the surgeon to boost her pain medications when needed. On a no less important matter, I made sure she got a chocolate, not vanilla, milkshake daily. After my own stays in the hospital, I had learned how to “work” the hospital staff, using genuine praise, patience and small gifts of candy.

I also had that firsthand knowledge of what it meant to suddenly become a cancer patient, dependent on the kindness of strangers and family alike. I knew what it was like to face the mechanical roar of the CT scanners, not to mention the anxiety and fear that your book of life may be coming to an end sooner than you’d expected.

Some days I held Mom’s hand, her Jungle Red manicure always perfect, as the nurses pricked her repeatedly to get a good line. Other times I’d just sit with Mom and let her talk. About my father. My sibs. And herself.

Increasingly, she asked me about my cancer travails, which included multiple surgeries and four rounds of chemo. “I can’t believe you went through all this,” she said time and again. Still, I’d been in my 20s; mom was now in her 80s. As different as our cancers were, not to mention our ages, I’d become her travel guide in this new country of illness.

Then one day she piped up, her voice an octave or two higher than usual: “I’m afraid.”

“Of the pain of dying. And leaving you kids.”

I told her we’d make sure she didn’t suffer. And as for the three kids, I told her not to worry about us. “We’re all in our 50s now,” I reminded her.

As I had decades ago, Mom recovered from her first operation. And also like me, she moved into a netherworld I knew all too well: The “after” stage, during which you struggle to believe it’s over, all the while dreading its return.

Last year I moved her semi-annual scan from late December to mid-January. With bad news always a possibility, why risk ruining the holiday? I was glad I’d done that when the scan showed a new mass. Although the doctor was the official bearer of the bad news, it was left to my brother, sister and me to explain what that meant, all the while reassuring her we’d be there to help.

As it turned out, one of the most important decisions she’d have to make was what treatment, if any, she should soldier through to combat this new malignancy. Dr. Handsome recommended radiation, but he didn’t sound very optimistic. I decided Mom needed a second opinion, maybe even a third, and with some cajoling — just as she had urged me on so many years before — she sat down with a radiation oncologist. He was much more encouraging about what to expect, and she took his advice.

And so it was not too many months ago, after helping her back into her street clothes and into the Uber after her daily radiation, that we were headed home from the hospital. She grasped my hand tightly and told me how glad she was that I was with her. “Whatever our problems were,” she said, “I’m happy they’re behind us.” I squeezed her hand back.