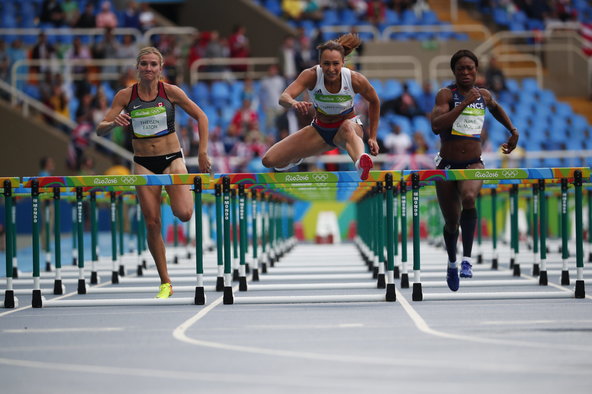 Watching the Olympics, especially the track and field events, has long been somewhat fraught for me. Sixteen years ago this summer, I retired from my career as a professional runner and abandoned my dreams of becoming an Olympian. I had been a top-ranked American runner, represented the United States in international competition and was a World University Games gold medalist. So while viewing the Olympics brought joy, it was matched with an undercurrent of sadness and self-criticism. I missed my former life and lamented the lack of intensity in my physical fitness regime.

But this year, I am watching the world’s best athletes in Rio with unqualified excitement. In my 40s, with a family and a demanding career, I no longer feel bad about my own workout habits. On the contrary, I am excited to share my message. What changed? Me. I lowered my standards. A lot. And you might consider it too.

After I retired from running, I struggled mightily to settle into a consistent exercise program. I oscillated between intense focus and doing nothing. My old pattern — one that was ingrained from years of being a competitive athlete — was to set ambitious goals, be disciplined and do everything in my power to achieve them.

So, for example, when I was working 14-hour days on Wall Street, I pushed myself to train for the New York City marathon by working out before dawn. I did well for a nonprofessional, placing 31st among women with a time of 2:55. The effort, however, was so taxing that it was followed by months of slothfulness.

Then I got myself back into shape — this time to do triathlons. And I did well, winning the odd local event, but again it didn’t last. With my new life, I simply didn’t have the capacity to maintain my old standards of training six to seven days a week and pushing myself to the limits. As a result, there were often weeks at a time where I did nothing. Having ambitious goals worked against me.

Then at the end of 2012, with two young kids and some newfound, and unwanted, “jiggle,” as I contemplated the year ahead, I was struck by an idea that was simple and, for a former athlete, radical: I decided to stop striving.

Yes, I missed my washboard abs and my rock-hard thighs. But when the alarm went off at 5 a.m., the only part of me working out was my hand hitting the snooze button. It was time to accept that my lofty fitness goals were not serving me well anymore. So I asked myself, what’s a goal that I know I could achieve? I settled on two short workouts a week. I figured at a minimum I could get in a run every Saturday and Sunday.

When I first embarked on my new routine, with my workout about as long as my warm-ups used to be, I wasn’t sure what to think. It felt silly and embarrassing — even blasphemous — to set mediocrity as a goal. Could such a modest goal motivate me? Would I feel any different? Was such a minimal effort even worth it?

As it turns out, my approach is sanctioned by science. One can almost cite by rote the doctor-recommended goal of a minimum of 30 minutes of exercise five days a week. But a growing body of evidence is showing that doing higher-intensity workouts just a couple days a week can be just as good for you. I now understand that quality need not be quantity. (Thank you, Gretchen Reynolds!)

Indeed, what has surprised me is not only the level of fitness I can maintain but the virtuous cycle that comes from setting a goal and meeting it. For over four years now I’ve maintained my commitment to two days a week. I’ve run half-marathons and been somewhat competitive. But more important, I feel really good and am fit. It’s been a revelation.

I see many people struggling with the perception that one has to have extreme or ambitious fitness goals – a message reinforced by just about every fitness apparel ad on TV – or why bother. And there are those who manage to maintain a rigorous fitness routine despite the demands of work and family. But far more common are folks like me — those who have a hard time fitting fitness into daily life.

Now, when I share my story with others struggling to find their fitness groove — working parents with young kids, former high school and college athletes or people who are just stretched thin for whatever reason and just aren’t sure how to fit fitness in their life – they usually look confused, then elated: “You set the bar low? I can set the bar low?” Yes! Set the bar low.

And so to all of you struggling to find your fitness groove, I have a message for you: Do less, and do it regularly. You might never hear the roar of the crowd or stand on the podium, but you’ll feel better, and that nagging voice will be replaced by a sense of accomplishment.

Nnenna Lynch, a managing principal at The Georgetown Company and a New York Road Runners board member, lives in Harlem with her husband and two children.