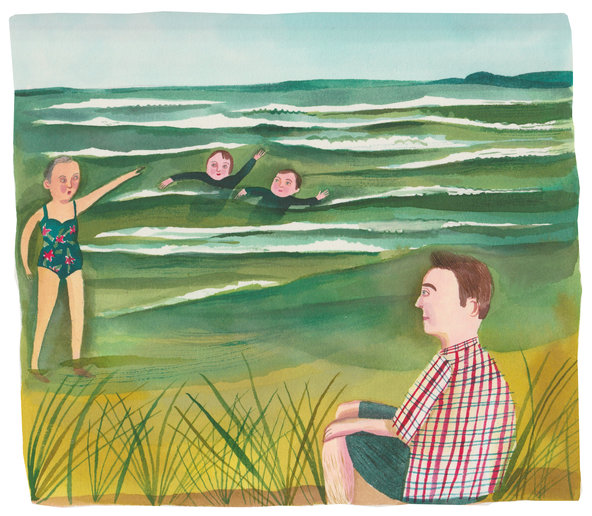 Yesterday, the waves on the lake were as muscular, as quick, as white-capped as any I’ve seen in the five summers we’ve been renting a house in Douglas, Mich., on the state’s southwestern shore. The vast blue expanse of Lake Michigan can be especially daunting on a windy day, here at the edges. Forbidding, even.

You know intuitively that if the waves are coming at you with great force, they’re receding with the same violence. It’s no small thing to let my 6-year-old twin daughters swim on a day like this. I’m sure the metaphor is as ancient as the first father to stand beside his kids on some prehistoric beach: Parenting is about letting your children stride, then swim, further and further, into deeper and more dangerous waters.

I sit there on the lip of the dune, my feet hanging over lapping waves, and I watch my daughters play. Yes, play. It is thrilling to them. This lake was “Big Sea Water” to the natives who named it; “The Michigan” is what my girls have called it since they were 2.

Like so many things that frighten us parents, they are eager to test themselves against it. I wait, my legs ready, watching for any sign of faltering or fear. For any suggestion that one of them is suddenly reeling. The water announces itself loudly, incessantly, but all I can hear is Claire and Leigh, giggling. Maybe there’s no reason for me to worry, or maybe they just have no idea what a lake like this can do. A woman approaches on my left, walking up the beach, and beckons the girls toward the sand. She might be 60. She’s fit, in a swimsuit. She doesn’t see me, sitting in the tall grass. When the girls come up onto the sand, she bends low and talks to them.

I can’t hear her, but they point at me. She nods and gestures beyond me, suggesting they move up the beach and re-enter the water to my right, and then come out again when the waves push them down to where they are now. She makes a circular motion with her hand. They nod.

I don’t mind other adults stepping in to make suggestions to my kids; it happened all the time when I was their age, and I think my friends and I were better for it. As the girls scoot past me, she approaches, says something about the undertow. “Is it bad?” I ask. “It’s a lot harder to come back in than it is to get out there,” she says with a smile.

I was a lifeguard in my time, but she doesn’t need to know that. I like that she is busybodying us.

The girls go back in. They don’t go far. They shriek and throw themselves into the waves, let those waves push them from 50 yards to my right, to 50 yards to my left, before they walk back out, run up, and start again.

Half an hour later, the same woman approaches, from the same direction as before, left to right. I’m bewildered. I’ve been here 10 days. People pass one way, then walk back the other way, but not this woman. On cue, the girls come out and scurry past her, head back in. I speak when she’s close enough to hear me over the pounding surf. “You’re coming the same way. Do you walk up to the road and circle back?”

“Oh, no, I’m swimming! I was out there.” She gestures far out into the lake. She must have 10 years on me, and she’s swimming half-mile laps into the teeth of these turbulent waves. I’m stunned. I’d been watching the girls and hadn’t even noticed her. Over her left shoulder, I see Claire moving back toward the beach. Leigh is no longer moving with her, in tandem, as she has been. She appears to be moving away, backing into the waves.

The woman asks, “They’re O.K.?” and just as I’m about to reassure her, I see what I think is the wrong look on Leigh’s face.

A wave crashes over her, and she tumbles awkwardly. I can’t see her. When she surfaces, she appears to be gasping. I jump off the dune and move to the water fast.

But the woman is quicker. She runs past me into the waves. We’re both moving, but she is twice as close to my daughter as I am. And we see it at the same time: Leigh is smiling ear to ear. She throws back her head and laughs loud. Alone in her moment, but fearless. Like a movie villain.

Leigh takes long strides toward the beach without even noticing that we are so close. The woman turns to me and smiles. She is heading out to deeper water, where she will start her next leg.

Leigh sees me there finally and calls, “Pop, are you coming in to swim with me? It’s so fun!” “Nope, nope.” I take her hand. “I just want to walk you back to the starting place.” “I don’t need you to.” “I know, boo.” I cup the back of her head in my hand and turn to the shore, where Claire is waiting.

As they trudge back into the lake, I can see the woman in the distance, just beyond the whitecaps, her smooth, strong strokes cutting the water. And I make a wish for my daughters.